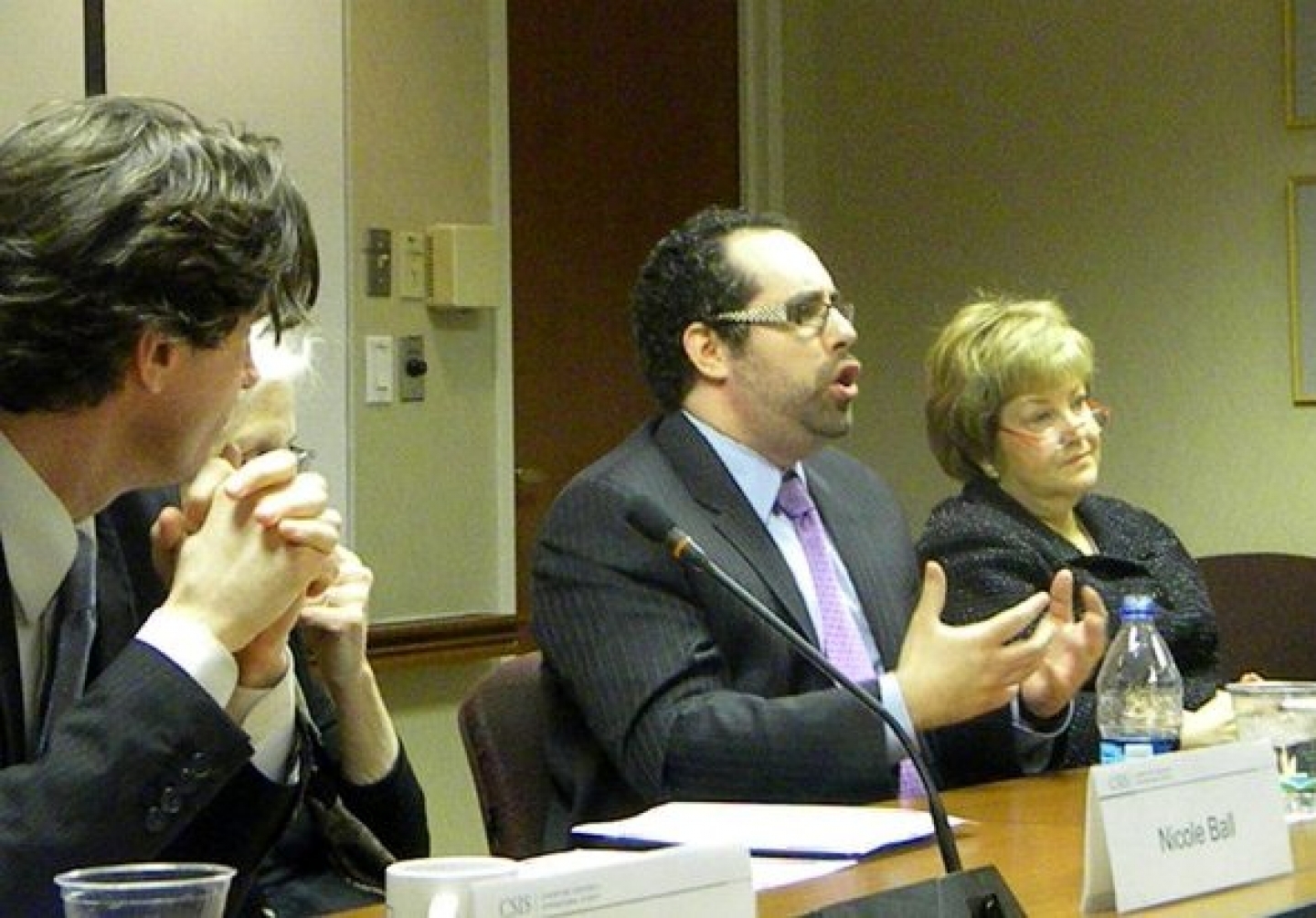 The event used the findings of the eBook as a starting point for discussion, and focused on the development of the SSR model, its shortcomings in implementation and where the concept should go in the future. Security sector reform is an umbrella term for principles and practices used to reconstruct the security and justice architecture of fragile, collapsed and conflict-affected states, and to establish structures of oversight and accountability. For those interested in hearing the discussion, the event is available to listen to or download here.

Also on the panel were Future of SSR chapter author and Senior Fellow at the Center for International Policy, Nicole Ball, as well as CSIS Senior Associate Johanna Mendelson Forman and CSIS Senior Fellow Robert Lamb.

Sedra began the panel’s discussion by outlining the failure of the SSR model to build on early success stories in the former Soviet Union and South Africa, a problem that can partly be explained by the fact that today’s fragile states do not share some of the positive characteristics — political will, an established bureaucracy, relatively high levels of education, for instance — of SSR’s early adopters. The result is a model that, despite enjoying a clear international consensus, has generated few recent successes.

Part of the issue, said Sedra, is that the SSR model tends to be too rigid to allow practitioners to take advantages of all opportunities for reform. SSR is sometimes treated as a technical exercise, rather than the intensely political process that it is. In difficult environments like Iraq and Afghanistan, the governance aspect of SSR has been underemphasized in favour of hard security objectives. Like all development programming, SSR suffers from short funding cycles and a demand for demonstrable, short-term results.

The international SSR community must continue to develop the model into a more nuanced, textured approach. This “next-generation” SSR should be more realistic and pragmatic; focused on results rather than process; implemented in areas where international engagement can make a difference; grounded in a service delivery model; and more politically engaged.

The next panelist, Nicole Ball, argued that with very few exceptions, the SSR model has failed to be implemented faithfully. In the post-September 11 environment, even as the SSR model has gained more widespread adherence (for instance, the 2008 US Army field manual had a section on SSR that was based on OECD-DAC principles), the actual delivery of SSR has remained focused on training and equipping security forces. The result is that what people are calling SSR is actually traditional security assistance, with little emphasis on democratic governance imperatives.

Ball maintained that the original rationale for SSR has been forgotten or ignored by many donors, and that as long as leaders seeking security assistance can get unconditional funding, it will be difficult to push reforms in governance, democracy and transparency. The solution is that the SSR model should return to its roots as an iterative process that is locally led and focused on providing tangible gains in security and justice to local populations.

Johanna Meldelson Forman went on to discuss how SSR’s early cases were largely post-authoritarian transitions, not ongoing conflicts like Iraq and Afghanistan. In early post-conflict cases like El Salvador and Guatemala, the peace accords actually provided roadmaps for SSR programming. Part of the problem with the SSR model is that it is being implemented in hostile environments and amid ongoing conflict. In the US case, SSR’s holistic approach has been compromised by the imbalance of funds available to the Departments of Defense and State and USAID.

In the question period, the panelists were asked about examples of entry points for SSR, and how to balance the large size of the Sudan People’s Liberation Army (SPLA) — a short-term necessity — with the long-term imperative to rebalance the government’s financial commitments.

The panelists argued that entry points should focus on areas where donors can find traction, which might be outside the state (working with shuras in Afghanistan), or in neglected areas of SSR (pursuing public finance management and the need for transparent accounting in the security sphere with financial officials), or as part of a regional approach (using Uganda’s experience in developing a defence white paper to pique the interest of Burundian authorities).

In Southern Sudan, the approach to downsizing the SPLA should take into account that in the short to medium term, the size of the army can actually be a stabilizing force, as it provides livelihoods for the soldiers, who might otherwise be a source of insecurity, as well as their families. The solution should therefore be voluntary demobilization over the longer-term, rather than immediate large-scale cuts in personnel.

More of Mark Sedra and Nicole Ball’s thoughts on SSR are available in the eBook, The Future of SSR, available as free dowloadable PDF, or for purchase from Amazon or Kobo for your eReader or eBook-compatible device.

Geoff Burt is a research officer in the Global Security program at The Centre for International Governance Innovation.