2020: The Year Canada Must Focus on Strengthening Global Democracy

As Michael Petrou writes, the Trudeau government claims to have a human rights-driven foreign policy. But what Canada values are all products of liberal democracy — a system in need of support, this year more than ever. 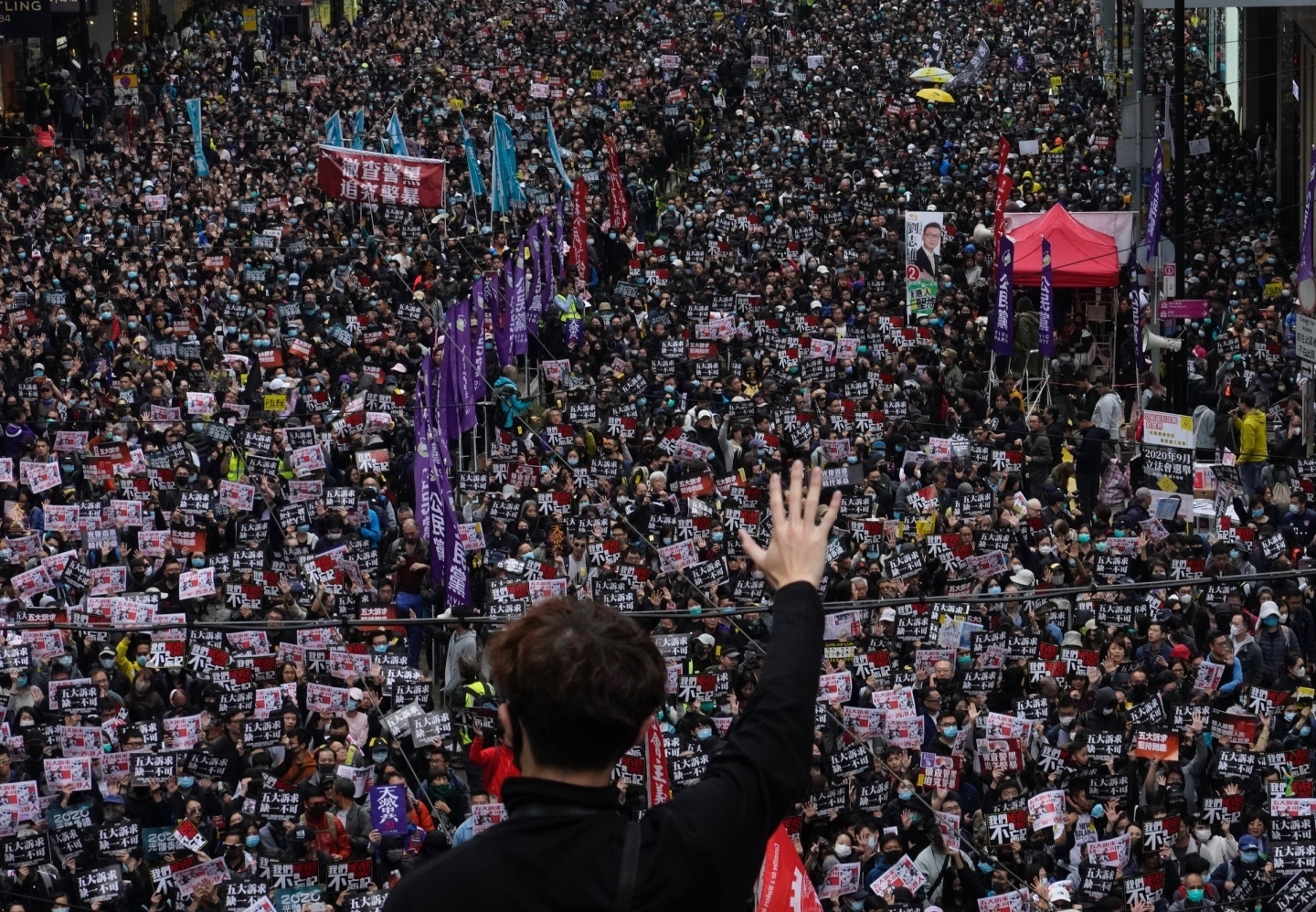 A protestor shows a "five demands" gesture while participating in the annual pro-democracy march in Hong Kong, on January 1, 2020. (AP Photo/Vincent Yu)

There’s a story we used to tell ourselves about democracy because it made us feel good about the present and hopeful for the future. It was premised on the conviction that democracy is the best form of government and on the assumption that its expansion would be, if not quite inevitable, then at least assured with appropriate nudging and support from existing democracies in the West.

This thinking has advanced in fits and starts in Western capitals since at least World War I, when American President Woodrow Wilson took the United States into that conflict with the goal of making the world “safe for democracy” and a vow to support the self-determination of people within the Austro-Hungarian and Ottoman empires.

The victorious allies turned out to be more favourably disposed to autonomy when it was for white Europeans than for Arabs, and democratic gains after World War I faltered with the advance of fascism and communism in Europe.

Another democratic wave and recession followed World War II, and then, with the fall of the Berlin Wall and the collapse of the Soviet Union, it seemed, briefly, as though democracy’s global tide would not recede. American political scientist Francis Fukuyama, in a 1989 essay, and later in a 1992 book, pondered whether humanity had reached the end of history. “That is,” he explained in the essay, “the end-point of mankind’s ideological evolution and the universalization of Western liberal democracy as the final form of human government.”

Few hold to such optimism anymore. This year, Freedom House, a think tank focused on democracy, reported that 2018 marked the thirteenth consecutive year that global freedom has declined. Democracy, it says, is in retreat.

Responsibility for Western complacency about democracy’s decline must extend to Canada.

In his recent book The Jungle Grows Back, American historian and journalist Robert Kagan asks readers to confront the possibility that this retreat isn’t a temporary slippage but rather that in the arc of history it is democracy itself that is an aberration. “All this has been an anomaly in the history of human existence,” he writes of post-1945 relative peace and prosperity. “The liberal world order is fragile and impermanent. Like a garden, it is ever under siege from the natural forces of history, the jungle whose vines and weeds constantly threaten to overwhelm it.”

This matters to Canada more than most countries. Our security, our trading prosperity, the values that are baked into our politics, all depend on the success and the fortitude of the liberal international order. And that order in turn depends on the strength of global democracy in the face of the movements and political trends that oppose it, from resurgent nationalism to populism to dictatorship — and sometimes an amalgamation of all these and other illiberal ideologies. How resilient will Canada’s culture of pluralism prove to be if America’s declines even more? How can Canada hope to stand up to China’s bullying if it must do so alone?

Crises that involve slow shifts on many fronts can appear less serious than they are. Democracy’s decline and the weakening of the liberal order are easy to ignore because their repercussions are not explosively visual and seem unconnected. But this is a crisis that should be at the top of Prime Minister Justin Trudeau’s foreign policy agenda for 2020. It is worth reflecting on the roots of the problem and what Canada might do about it.

Much of the blame for liberal democracy’s erosion lies with the United States. In 2016 American voters chose as president a man who scorns pluralism at home and his democratic allies abroad, who demonstrates personal affection for dictators and strongmen, and who desires a reduced role for America in the world, certainly when it comes to spreading its values.

This means friendly dictatorships can crack the heads of protesters without fearing meaningful censure from the United States, but it also means the American democratic beacon has dimmed — and that matters, too.

“It is hard to overstate how important the vitality and self-confidence of U.S. democracy has been to the global expansion of democracy during the third wave,” American political scientist Larry Diamond wrote in 2015, referring to the expansion of democracy that reached its peak with the end of the Cold War. “While each democratizing country made its own transition, pressure and solidarity from the United State and Europe often generated a significant and even crucial enabling environment that helped to tip finely balanced situations toward democratic change, and then in some cases gradually toward democratic consolidation.”

American self-doubt about its role as a democratic champion is compounded by the confidence and assertion of Russia and China, which present themselves as successful alternatives to democratic government. Russians who are adults today can remember the poverty and disorder of Russia’s attempted transition to democracy in the 1990s under its frequently drunk president, Boris Yeltsin. His successor, Vladimir Putin, has, for two decades, promised stability and renewed pride. China, far wealthier and more powerful than it was a generation ago, has welded extreme nationalism to a similar story of economic progress and anti-Western defiance. 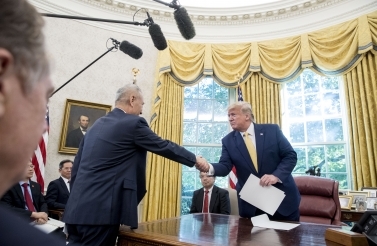 Recommended
If Economic Risk Spikes in 2020, Who Will Respond?

Both narratives are deeply flawed, but they resonate, and not just in China and Russia. I teach a university course on democratization. It is not taken for granted by students enrolled in the course that democracy is in fact a desirable outcome for everyone, everywhere. This skepticism is welcome, but I suspect the assumptions of students 20 years ago might have been different.

This is where responsibility for Western complacency about democracy’s decline must extend to Canada. Trudeau has taken a lot of criticism for expressing admiration for China’s “basic dictatorship” while running for the Liberal Party leadership in 2013. He deserves it. But, on China, Trudeau is hardly alone.

As an historian, I research and write about fascism in the 1930s. It is noteworthy that today, 80 years after the Spanish Civil War, the legacy of oil tycoon Torkild Rieber and the Texaco company he led is stained because of its provision of oil and credit to the forces of Spain’s fascist rebel leader Francisco Franco. The reputation of then-Canadian prime minister William Lyon Mackenzie King is diminished by his gushing account of meeting Adolf Hitler in 1937. What will future historians make of Canada’s minister of defence, Harjit Sajjan, attending a gala in honour of the founding of the People’s Republic of China, while that same republic jails hundreds of thousands of Muslim Uighurs in “re-education” camps? Or of Foreign Minister François-Phillippe Champagne, before being appointed to his current role, describing China as a “beacon of stability, predictability, a rule-based system, a very inclusive society”?

The Trudeau government claims to have a human rights-driven foreign policy. But everything the prime minister says he most values and wishes to promote is a product of democracy. As political scientist Sheri Berman has written, while democracies can be illiberal and oppressively populist, non-democratic governments restrict the benefits of liberalism to elites and oligarchs on whose support the government depends. Undemocratic liberalism is a myth.

A Canadian foreign policy that champions “the values of inclusive and accountable governance, including by promoting human rights, women’s empowerment and gender equality, and respect for diversity and inclusion,” as Trudeau’s mandate letter to Champagne dictates, or that promotes a “feminist approach to development,” as does the mandate letter to Minister of International Development Karina Gould, must therefore build on a strategy of expanding and strengthening democracy abroad.

If Canada is serious about supporting democracy and human rights abroad, it must be willing to pay a price for doing so.

A directive to increase support for democracy abroad is in Champagne’s mandate letter, and Trudeau has promised to establish the “Canadian Centre for Peace, Order, and Good Government” to “lend expertise and help to people seeking to build peace, advance justice, promote human rights and democracy, and deliver good governance.” This sounds promising, although what the centre, if and when it is established, will actually do is unclear. And Trudeau’s record on democratization over his first four years in office is mixed.

Canada was at the forefront of unsuccessful efforts to force the autocratic Venezuelan president Nicolas Maduro from office, declaring his re-election last year to be fraudulent. This was important, but the costs to Canada were low.

By way of contrast, when Saudi diplomats in Istanbul murdered and carved up with a bone saw Jamal Khashoggi, a dissident journalist they didn’t like, Canada announced a “review” of existing arms export permits to the kingdom and a freeze on new ones — while continuing to ship to Saudi Arabia $14 billion worth of light armoured vehicles.

Canada did impose sanctions on 17 Saudis linked to Khashoggi’s murder. The named individuals, who of course did not include Saudi Crown Prince Mohammad bin Salman, were already in Saudi jails when Canada sanctioned them, rendering the act symbolic at best. To claim that Canada will “increase” its support for freedom of the press in the face of such timidity, as Trudeau does in his letter to Champagne, takes some cheek.

It is regarding China, however, where the stakes on the health of global democracy are perhaps highest. China seeks superpower status, and as its reach expands so does its ability to persuade, cajole and coerce. Canada has so far held firm against Chinese pressure to free Huawei Chief Financial Officer Meng Wanzhou, who is out on bail in Vancouver while awaiting possible extradition to the United States. It is widely believed that Canadians Michael Kovrig and Michael Spavor are being detained in China as a retaliatory measure.

But Canada treats China solely as a desired trading party and not as an ideological adversary. This is a mistake. Canada’s values are not the values of the ruling Communist Party of China. And while Canada lacks the economic levers of, for example, the United States, it is not without means to pressure the Chinese government and its affiliates. Meng is not the only member of China’s aristocracy with multi-million-dollar mansions in Canadian cities or children in Canadian universities. Such individuals are vulnerable to sanctions, asset-freezes and visa restrictions.

Canada should consider such measures against officials involved in human rights abuses against Uighurs in China’s Xinjiang province and against pro-democracy protesters in Hong Kong. Of course, there will be repercussions from China. But if Canada is serious about supporting democracy and human rights abroad, it must be willing to pay a price for doing so.