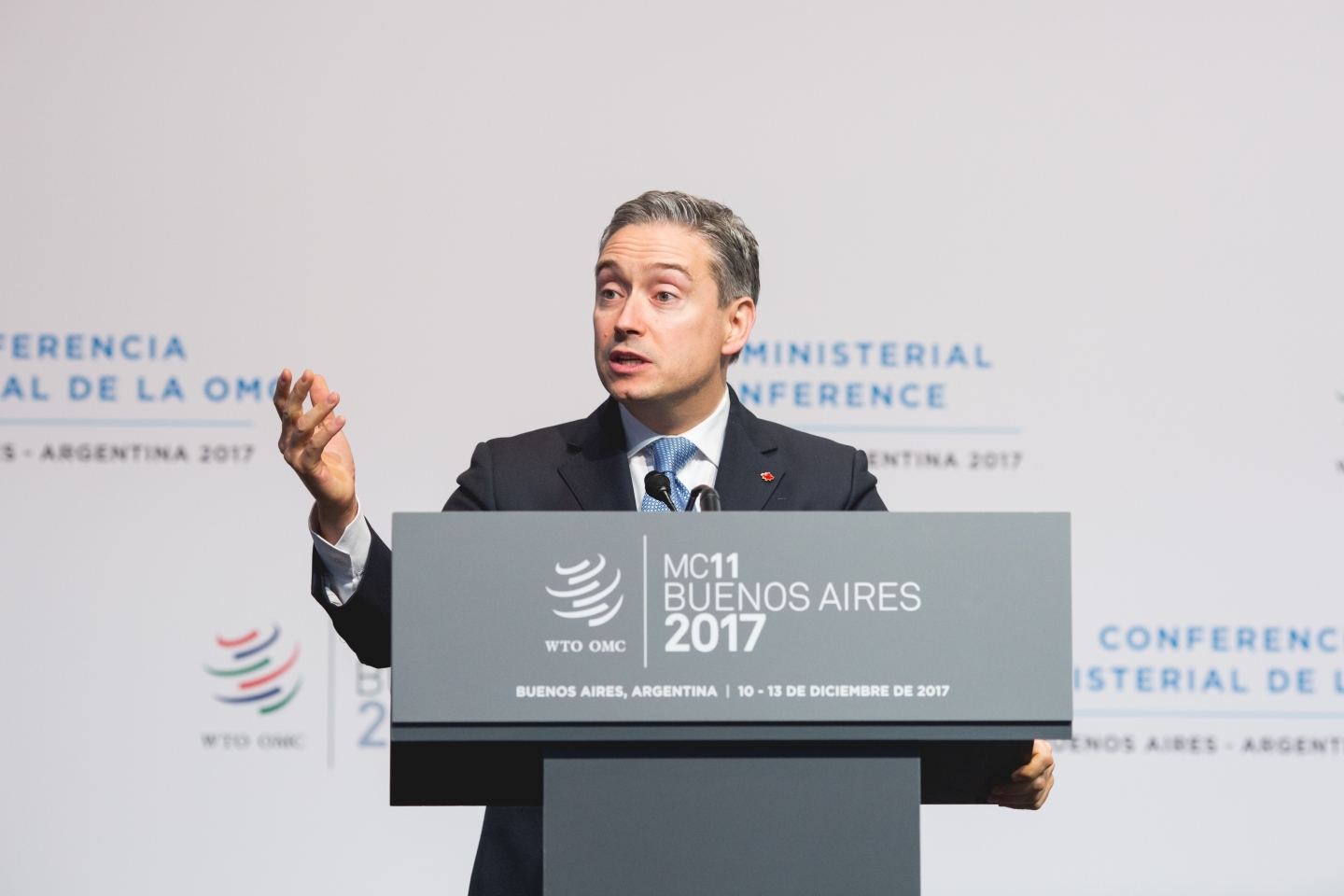 Trade is Not Gender Neutral

Canada continues to be a vocal proponent for open, rules-based trade and markets and is a champion of those principles on the world stage. Canada’s progressive trade agenda not only serves as a buttress against the forces of protectionism, but it has real economic value, too.

Trade is critical to current and future prosperity, but if Canada is to effectively protect and expand upon global markets, its government cannot afford to do trade the way it has always been done before.

Canada’s 2018 federal budget made equality of access and opportunity a central pillar of how the country can grow and strengthen the economy. Canada is taking that approach in its progressive trade agenda to ensure that more women are engaged in trade and reaping the rewards that come with it.

This is not only the right thing to do; it just makes economic sense.

Leaving 50 percent of the team on the bench means that 50 percent of the team’s strengths and capabilities are left on the bench, too. And when governments fail to see trade through a gendered lens, they fail to see that trade has not benefited women and men equally. In fact, only 11 percent of women-owned businesses are engaged in international trade. Neglecting to look squarely at the numbers and ask whether trade is gender neutral effectively resigns women to the bench. The costs of doing so are stark. In Canada alone, removing the barriers to more women engaging in international trade would boost the economy by $150 billion.

Those who believe that trade is gender neutral argue that trade liberalization automatically produces growth for all through the reduction of barriers to trade, such as import tariffs, promoting international trade and competition.

If this were true, a recent report released by the McKinsey Global Institute would not have found that US$12 trillion could be added to global GDP by 2025 by advancing women’s equality.

Of course, trade has lifted millions — if not billions — out of poverty. Trade has provided unparalleled growth and opportunity and has been a significant stimulus for Canada’s economic growth and prosperity. Now, during a time of rising skepticism and protectionism, is the time to evaluate whether more can be done. For example, a United Nations study estimates that if female farmers in developing countries had the same access to productive resources as men, their farm yields would grow by 20 to 30 percent; total agricultural outputs would rise by 2.5 to four percent in those countries; and the number of people affected by hunger would decrease by 12 to 17 percent.

The fact is that significant gender-related barriers, which limit or distort trade, still exist. These barriers represent missed trade-related opportunities for economic growth in national and international economies. By working to remove them, women’s economic empowerment and gender equality stand to benefit.

Canada will continue to promote a global trading system that reflects the hard-headed recognition that a progressive trade agenda is necessary for improving productivity, and competing and winning on the world stage.

An area of particular focus has been trade and gender. One of the most significant examples is the inclusion of a dedicated trade and gender chapter in the modernized Canada-Chile Free Trade Agreement. June 2017 marked Canada’s first gender chapter with its Chilean counterparts; it was also the first of its kind for any Group of Seven or Group of Twenty country. The chapter acknowledges the importance of incorporating a gender perspective into economic and trade issues to ensure that economic growth can benefit everyone. It also provides a framework for Canada and Chile to undertake cooperation activities on issues related to gender and trade, and it establishes a bilateral committee under the Canada-Chile FTA that would oversee these cooperation activities.

While the Canada-Chile trade and gender chapter was a first for Canada, it is just the beginning. Going forward, Canada has sought to incorporate gender provisions in future FTAs to help ensure that women and women-owned small and medium-sized enterprises can fully engage in the opportunities that flow from trade and investment. For instance, Canada is actively seeking a trade and gender chapter in the modernization of the Canada-Israel Free Trade Agreement, ongoing negotiations with the Pacific Alliance and Mercosur, and the renegotiation of the North American Free Trade Agreement.

Acknowledging the importance of incorporating a gender perspective into trade negotiations and agreements is critical for mobilizing every resource and, ultimately, positioning the country for success, not just in five years’ time, but in 20 and 50 years as well.

The Joint Declaration Puts Focus on Trade and Gender

I continue to be proud of Canada’s leadership role in championing the modernization of the World Trade Organization (WTO), particularly when it comes to creating more opportunities for more people to engage in trade.

The Declaration on Trade and Women’s Economic Empowerment on the occasion of the WTO Ministerial Conference in Buenos Aires in December 2017 was initiated by the governments of Iceland and Sierra Leone, as well as the International Trade Centre. The declaration serves as a catalyst seeking to remove barriers to — and foster — women’s economic empowerment.

At the time of publication, 119 members of the WTO had signed on to this pioneering declaration representing 72.5 percent of WTO members. Through the declaration, signatories agreed to find ways to best address barriers to trade, lack of access to trade financing and low participation of women in public procurement markets. Participating members will exchange information about what has worked — and what has not — in their attempts to collect gender-disaggregated data and to encourage women’s participation in the economy.

Participating WTO members will examine their own policies through a gendered lens and find ways to work together to increase women’s participation in the world economy. The commitments are poised to reduce trade barriers for women through knowledge sharing and collecting gender-disaggregated data which, in turn, advances gender equality and women’s economic empowerment through trade. Progress will be reported in 2019.

Canada was a key leader in the drafting and promotion of this initiative through the Trade Impact Group of the International Gender Champions network. The declaration adapts Canada’s FTA gender chapter with Chile to a multilateral context by establishing commitments for action and collaboration within the WTO.

That stated, Canada’s progressive approach to trade and gender at the WTO started ahead of the December declaration. Most recently, through the Trade in Services Agreement (TiSA); a services/trade-only agreement is currently being negotiated by 23 members of the WTO, including Canada.

In July 2017, Canada also proposed an innovative provision in the WTO Working Party on Domestic Regulation that would ensure domestic regulations do not discriminate on the basis of gender. If adopted, the provision would ensure that measures relating to licensing and qualification requirements and procedures do not discriminate on the basis of gender. Achieving improved commitments from all TiSA parties to address Canadian interests in key sectors like professional services, environmental services, information communications technology services and financial services, and limiting gender-based discrimination would be significant, as the participating countries account for 70 percent of world trade in services.

Some critics have said that the WTO is not the platform to discuss gender, while others have said that gender has no place in any trade agreement. Trade should be a march to the top, not a race to the bottom. Supporters of the declaration believe in unleashing a full spectrum of talents, so that hard-working people can compete and win on the world stage. Canada believes in engaging more people, particularly those who are historically underrepresented in trade; a progressive trade agenda can marry the benefits that have always come from trade with their interests.

After all, this is about job creation and job quality.

Looking to the Future: Making Trade Real for Everyone

More governments and multilateral institutions are incorporating a gendered lens into trade policy. Indeed, trade specialists have noted that focusing on gender and including targeted chapters on trade and gender have been a positive development, helping to raise awareness and highlight the gaps that still exist.

Canada’s 2018 budget went through a full gender-based analysis, examining how every spending measure or tax would affect men and women in different ways, while also looking at other intersecting factors like income, age, race and more. This budget also saw the introduction of a gender results framework that assesses the impact that this budget — and future budgets — will have on advancing gender equality. To ensure robust data collection — a critical component to getting this right — $6.7 million over five years and $600,000 a year thereafter have been allocated to Statistics Canada to establish a new Centre for Gender, Diversity and Inclusion Statistics.

Canada’s chief economist recently presented Canada’s approach to gender-based analysis at the WTO and has counterparts across government to address the lack of gender-disaggregated data and methodology to conduct gender-based assessments in the context of FTAs.

Others are taking Canada’s lead. On March 13, members of European Parliament (MEPs) voted on the inclusion of a specific gender chapter in all future EU trade and investment agreements, resulting in 512 votes in favour, 107 against and 68 abstentions. The MEPs want future trade deals to promote international commitments on women’s rights, gender equality, gender mainstreaming and the empowerment of women, based on international standards such as the UN’s Beijing Platform for Action and the Sustainable Development Goals. They also called for binding and enforceable measures to combat exploitation and improve working and living conditions for women in export-oriented industries.

Canada is on the cutting edge of a nascent, necessary and long overdue effort to build more progressive trade policies. Playing with the whole team is important; when the nation does that, Canada can compete and win on the world stage now and for decades to come.