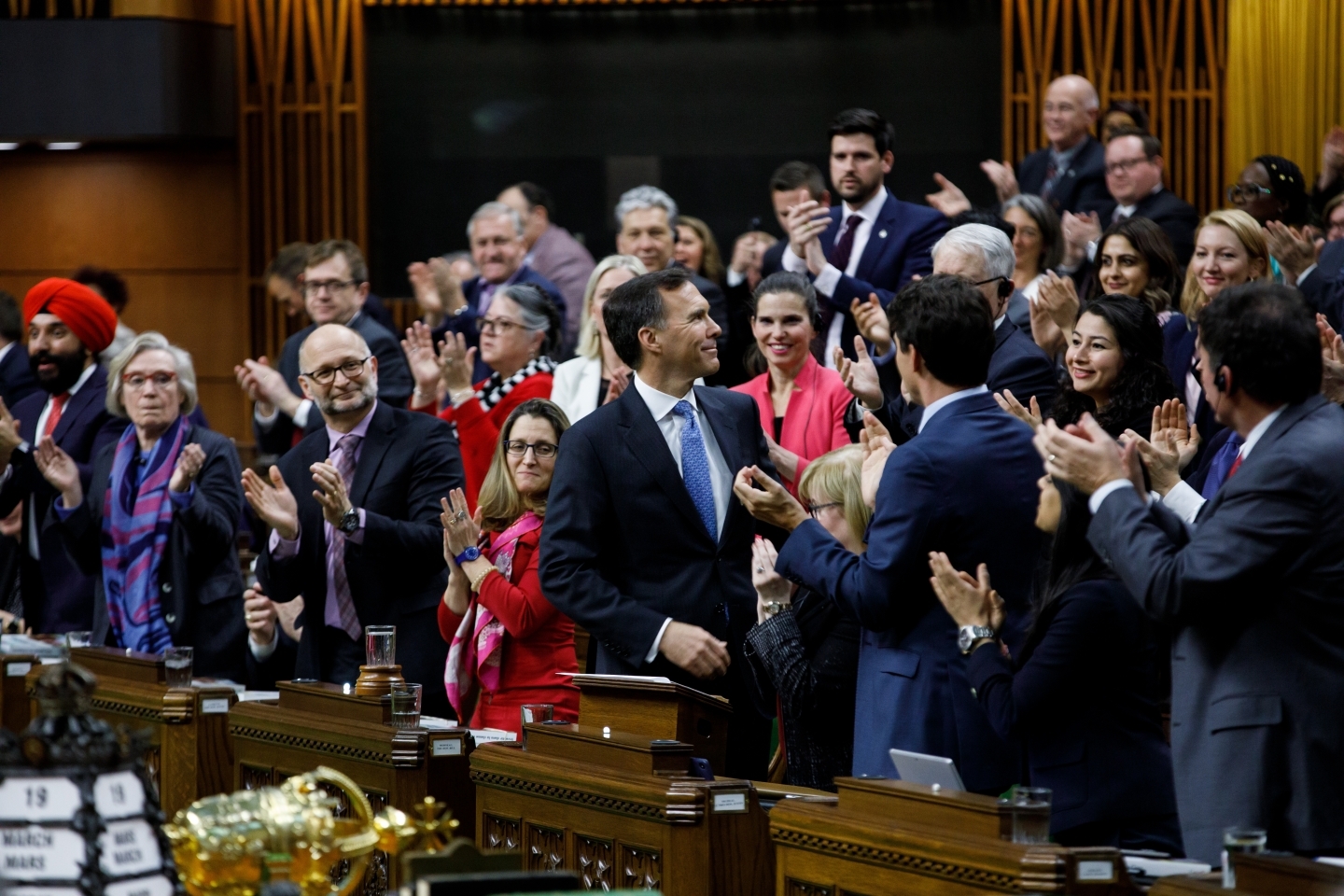 Balanced budgets are going out of style in Canada and the United States.

That’s significant. In both countries, a commitment to fiscal sobriety used to be a political imperative, even if it meant politicians sometimes would end up governing differently than they’d promised on the campaign trail. Now, the leaders of those countries appear to have calculated that voters — or at least their voters — don’t care about deficits.

The shift could represent a renewed tolerance for public debt that would allow for transformative spending on infrastructure, training and other measures that could help countries cope with demographic and technological change. However, it remains to be seen if creditors will embrace looser spending doctrines as enthusiastically as the borrowers have.

Earlier this month, US President Donald Trump released a budget plan that predicts a shortfall of $1.09 trillion in 2019, a 40 percent increase from the previous year.

The US deficit shrunk for six consecutive years after peaking at $1.5 trillion in 2009, when President Barack Obama’s administration got congressional approval to spend heavily in order to fight the Great Recession. But the leaders of the Republican majority in Congress — who insisted on austerity measures when Obama was president — approved big tax cuts and spending increases for Trump. The current budget shortfall is essentially unprecedented, as it comes amid strong economic growth, in contrast to the aftermath of the financial crisis, when GDP collapsed, taking government revenue down with it.

America’s federal government has run only six budget surpluses since the end of World War II; the political establishment’s commitment to fiscal prudence has always been more rhetorical than real. Canada is different. Liberal and Conservative governments recorded 11 consecutive surpluses, starting in 1998. Two of three major political parties promised a return to balance in the 2015 election. The exception was Justin Trudeau’s Liberals, who said they would run small deficits for a few years in order to spend on infrastructure before returning to surplus in 2019. Trudeau’s party won, disrupting the notion that Canadian voters would reject any politician who was soft on deficits.

Canada’s next federal election is set for October, and Trudeau is betting that Canadians are no longer fixated on balanced budgets.

Bill Morneau, the finance minister, had a chance to significantly narrow the fiscal shortfall this year and perhaps even to keep Trudeau’s promise to rebalance the books by the end of his first four-year term. Instead, Morneau allocated all of $6 billion in unexpected revenue in 2018 to new programs, budgeting a deficit of $15 billion for the fiscal year that ends this month, according to a new financial plan released on March 19. Morneau told Parliament that Trudeau’s government remained committed to moving “towards” balance; the budget forecasts a shortfall of about $20 billion next fiscal year, before it narrows to about $10 billion in 2024.

The nonchalance about the deficit is jarring for some. Most economists at Canada’s biggest banks advised the Trudeau government to ease up. The economy has been growing steadily for a few years, and the jobless rate is near a record low. It’s the moment in the economic cycle when Keynesian orthodoxy dictates that governments should be saving up for a rainy day. 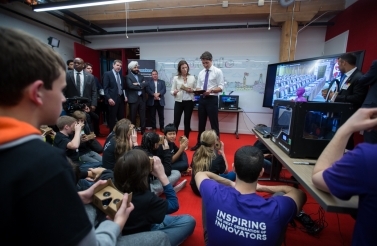 “We are not on the brink of a recession,” Rebekah Young and Marc Desormeaux, economists at the Bank of Nova Scotia, said in an analysis of the budget. “Paying down the debt burden now would keep our powder dry for such a future event.”

To be sure, Trump and Trudeau could be spending for entirely political reasons. However, both governments insist they know what they are doing. The US president says his tax cuts will pay for themselves by generating annual economic growth rates of around three percent. Trudeau and Morneau say they are fiscally responsible because they have promised to keep the debt-to-GDP ratio from growing beyond its current level of about 30 percent.

Outside of the White House, few economists think Trump can balance the budget without raising taxes or making severe spending cuts. Nor are there many fans on Bay Street or Wall Street of Trudeau’s preferred fiscal anchor; economists at the Royal Bank of Canada, the country’s biggest lender, say the debt-to-GDP ratio represents a “weak” commitment to keeping spending under control. On March 20, Fitch Ratings, one of the main bond rating agencies, said that the combined level of federal and provincial debt was “inconsistent” with Canada’s rating as a AAA borrower.

But both governments may have a better defence of their fiscal policies: deficits don’t matter.

Politicians in Canada and the United States aren’t the only ones abandoning budget orthodoxy. Many academics are wondering whether deficits and debt are as harmful as they thought. Adherents of Modern Monetary Theory (MMT), which has found favour with leaders on the increasingly popular left wing of the Democratic Party, say that a country that prints its own currency can manage significantly higher levels of debt than orthodox economists allow. It is an extremely controversial opinion, but the rebels so far have refused to concede. One thing is clear: the debate about MMT is creating political space to run bigger deficits.

So is Olivier Blanchard, the former chief economist of the International Monetary Fund. In January, Blanchard, who now is a professor emeritus at the Massachusetts Institute of Technology and a senior fellow at the Peterson Institute for International Economics, gave a lecture in which he argued that there probably isn’t a tight correlation between debt and taxes.

Purists have long believed that debt leads to higher taxes because creditors eventually have to be paid; if they aren’t, interest rates will rise and a country’s debt burden will become even heavier. Blanchard did an historical analysis and decided that governments can borrow without raising taxes rather easily. Revenue is determined by nominal GDP. So, as long as nominal GDP grows faster than a government’s borrowing costs, debt can be eliminated by refinancing existing bonds. Governments would remain indebted for a longer period, but they likely would avoid shocking their own economies with tax increases or spending cuts. “In a way, there is no fiscal cost,” Blanchard said. “We can discuss the semantics, but you can see what I have in mind: You don’t need to raise taxes to finance the additional debt.”

Blanchard cautioned that his conclusions shouldn’t be used as an excuse by governments to blow their budgets. However, they are contributing to a rethinking of fiscal policy. Avery Shenfeld and Royce Mendes, economists at the Canadian Imperial Bank of Commerce, applied Blanchard’s analysis to Canada and concluded that the federal government can likely get away with bigger deficits, as long as most of the spending is used on infrastructure or other measures that make the economy stronger and better able to generate wealth.

“Governments can run deficits not just to boost current spending, but also for investment in public sector capital (i.e. infrastructure) that generates its own future returns in enhancing GDP growth,” they wrote. “That suggests that we [should] put less focus on how much debt is being issued, again particularly at the lower-cost federal level, than on where those infrastructure dollars are being allocated in terms of the future economic returns.”

In all, Morneau made new promises worth about $25 billion over the next five years. Commitments that could boost economic output include a new skills initiative ($5 billion); enhanced benefits for seniors, including an incentive to work past retirement ($2 billion); an additional $2 billion in 2019 for municipal infrastructure and about $700 million to ensure every Canadian has access to a broadband connection. The rest of the money was allocated on programs too numerous and small to mention. Trudeau talks a lot about “inclusive” economic growth. With an election set for October, he might have put more emphasis on one part of that equation than the other. 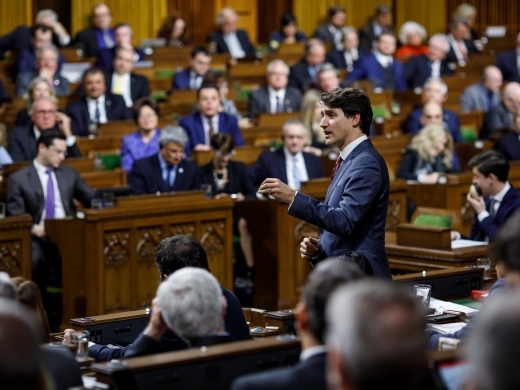