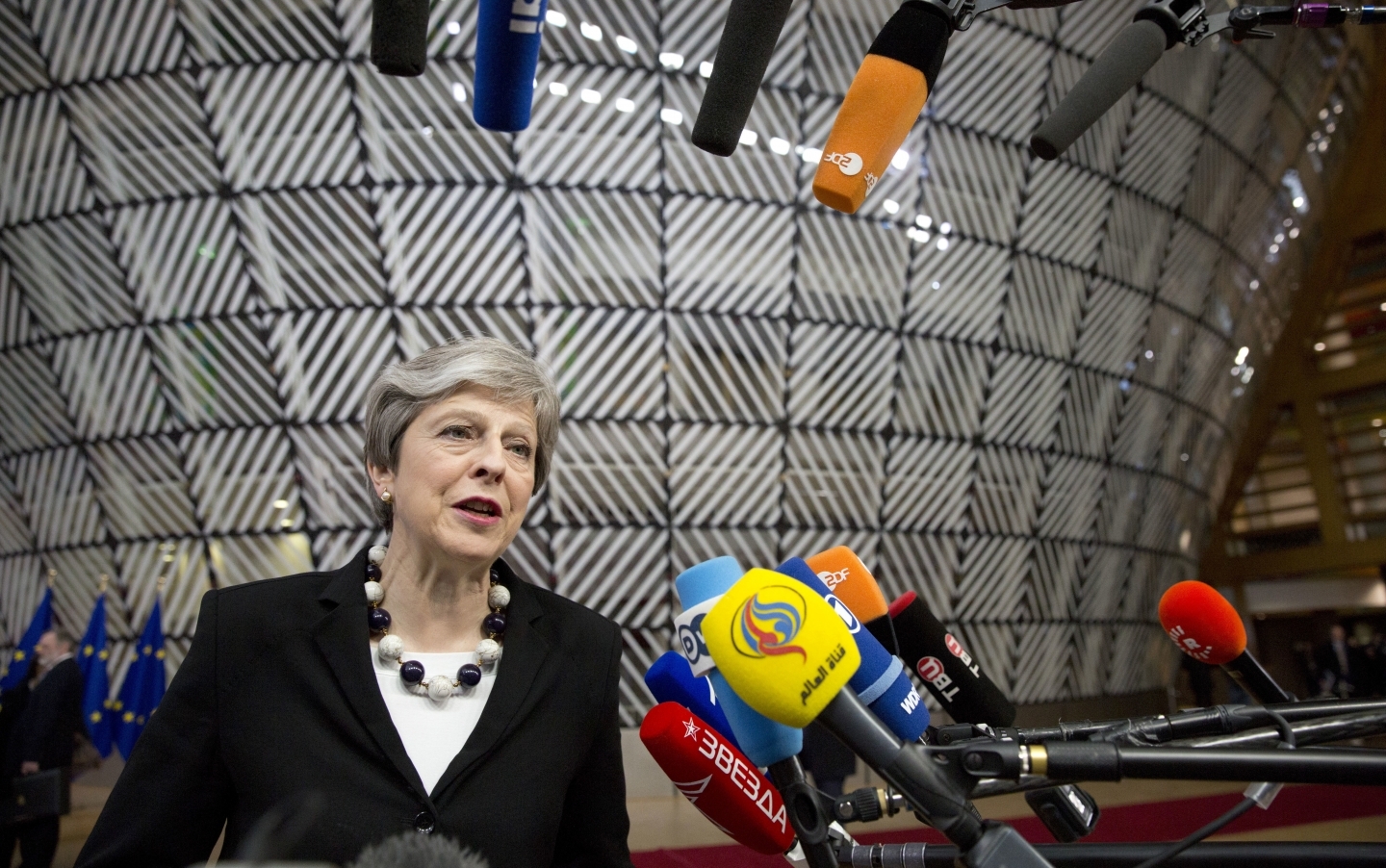 British Prime Minister Theresa May speaks with the media as she arrives for an EU summit at the Europa building in Brussels on March 23, 2018. (AP Photo/Virginia Mayo)

The Centre for International Governance Innovation, in conjunction with its partner, the British Institute of International and Comparative Law, launched a book titled Complexity’s Embrace: The International Law Implications of Brexit in London on May 3. Based on papers presented to a conference in London on January 31, 2017, the book covers a wide range of problems posed to the British government by Brexit. In retrospect, the choice of topics was remarkably prescient and, unfortunately, few of the issues raised appear to have been resolved to the satisfaction of either the British government or the negotiators of the European Union. With the Brexit date of March 29, 2019, only 10 months away, it seems appropriate to take stock of the negotiations and their uncertain outcome.

What does Britain want? The British government continues to have difficulty in fully defining its negotiating position. Starting with the narrow and somewhat unexpected victory of the Leave campaign and the pledge by Prime Minister Theresa May that “Brexit means Brexit,” neither the she nor the Secretary of State for Exiting the European Union David Davis have succeeded in clearly defining the preferred outcome. The list of options is still a long one:

While May is reported to favour the customs partnership, an agreement has not been reached in the inner “war cabinet” committee charged with guiding the negotiations with the European Commission. The Labour Party has opted for maintaining the EU customs union but, so far, has lacked the will to disrupt the negotiations and force the hands of the government by a vote of no confidence. In recent weeks, the House of Lords has become the centre of opposition to a hard Brexit with the adoption of a series of amendments to the repeal bill. These amendments, if adopted by the House of Commons, require the government to maintain the customs union with the European Union and require a parliamentary vote on any future negotiated settlement before it becomes binding on the United Kingdom.

Negotiations continue with the European Commission to define the terms of departure of the United Kingdom from the European Union. The draft withdrawal agreement is a lengthy and complex text, which includes many agreed provisions, such as that the United Kingdom will bear the cost of withdrawal. Still, the draft contains a number of unresolved articles — particularly those referring to the maintenance of a free and open border between Northern Ireland and Eire. Until complete agreement has been reached with the European Union on the terms of leaving, the European Commission has refused to begin formal negotiations to define the economic relationship that would replace the EU treaties after Brexit.

The March 29, 2019, deadline is fast approaching; both the United Kingdom and the European Union have agreed on the necessity of a transition period of another 21 months. On both sides, realization is growing that a complete long-term arrangement will not likely be achieved within the time available, but as yet there has been no suggestion that the deadline of March 2019 might be extended, as permitted by article 50 of the Treaty on the Functioning of the European Union.

The watchword on both sides is that negotiations are continuing and will succeed in due time, but Chief Negotiator Michel Barnier, who leads the European Commission’s Brexit task force, continues to express skepticism on the acceptability of various UK proposals such as the “customs cooperation” option currently mooted in London. It is also uncertain whether the heads of government meeting at the EU summit in late June will be able to sign off on a withdrawal agreement, and thereby authorize the beginning of negotiations on the future economic relationship between the two parties.

Prime Minister May’s situation is made more difficult by the discord within the parliamentary caucus, which appears to be divided among some 60 “hard Brexit” members of Parliament (MPs), others who may favour softer options and possibly some who could support maintenance of the EU customs union with the Labour Party. The 10 Democratic Unionist MPs continue to reject any suggestion that Northern Ireland might remain in the EU customs union if the rest of the United Kingdom is out.  Further complicating the position of the government are several potential constitutional issues, ranging from the exercise of powers devolved to Scotland and Wales, to the propriety of allowing the executive to take various decisions regarding the status of EU law that will remain applicable in the United Kingdom after Brexit. Parliament’s authority to have the last word over the terms of Brexit is seen by all to raise high political questions and by some to raise constitutional issues as well.

The future remains uncertain. Many things may happen, including an election triggered by some Conservative MPs joining the opposition to accept amendments of the repeal bill. The most probable, unfortunately, is that Britain will muddle on toward an uncertain future.

What is certain is that the Canadian government should be preparing for a situation where new international arrangements with the United Kingdom on trade, civil aviation, atomic energy and other issues, as well as correlative legislation, may be urgently required if provoked by a sudden and hard Brexit on March 29, 2019.