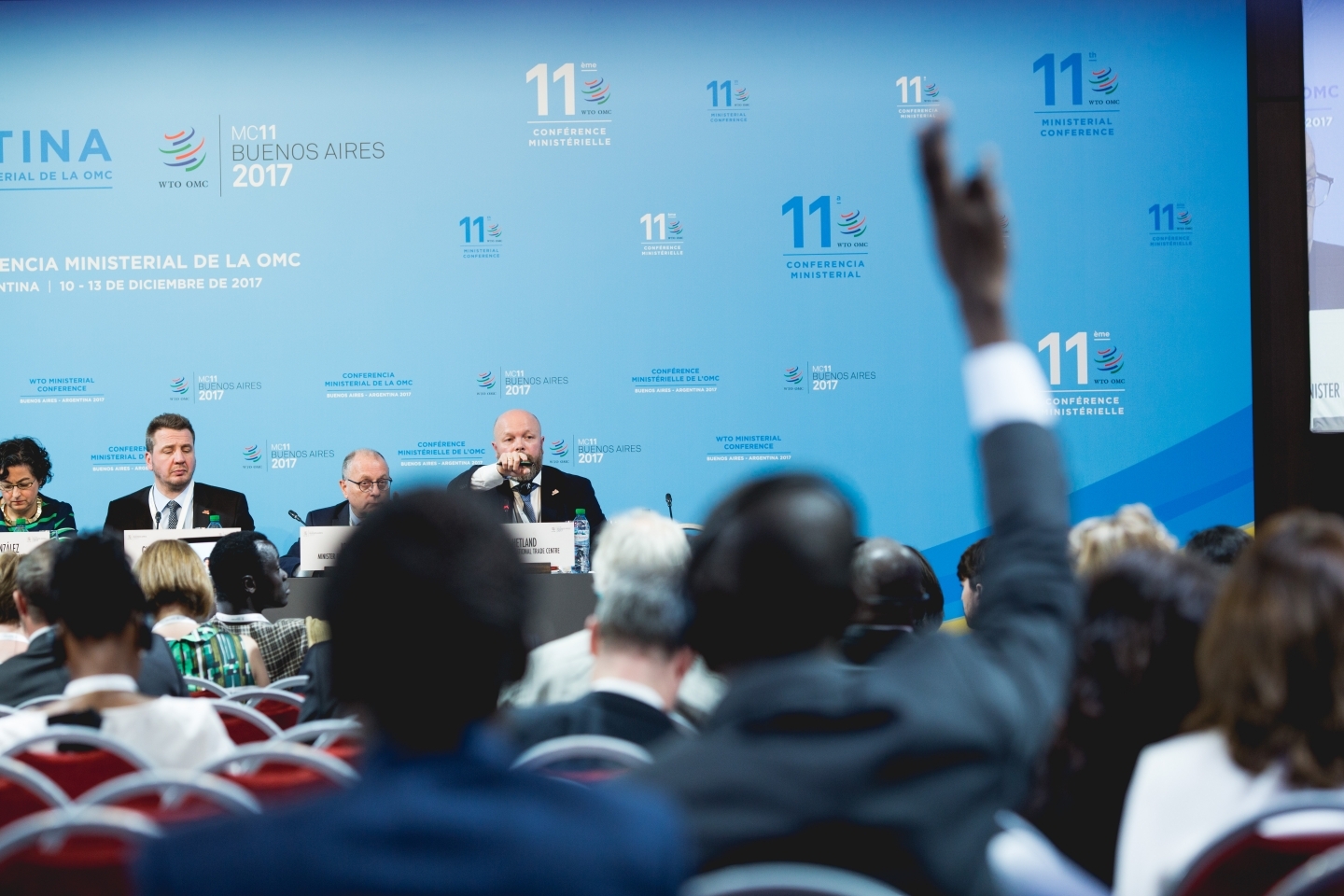 Panelists answer questions at a press conference on women and trade during the eleventh WTO ministerial conference. (WTO/ Cuika Foto)

Gender and trade had a good year in 2017. During the World Trade Organization (WTO) Ministerial Conference in Buenos Aires, 121 of 164 WTO member states and observers joined forces to sign the Declaration on Trade and Women’s Economic Empowerment. Earlier that year, Canada and Chile amended their free trade agreement (FTA) to include a stand-alone gender chapter. Similarly, Chile and Uruguay included gender measures in their 2016 FTA.

As an explicit trade consideration, gender has been neglected for decades. These initiatives may spark the formation and expansion of a gender and trade framework in international trade.

To those excited about such initiatives, a word of caution: while progress is being made, steps must be taken to ensure the declaration and two FTAs do not become isolated examples of gender sensitivity in trade. If implemented effectively and more countries adopt similar policies, the WTO declaration and the two FTAs could become the beginning of a trend in favour of gender inclusiveness in national and international trade policy that ensures equal treatment of women and men in trade and creates a gender-positive trade environment.

It’s worth defining the phrase “gender-positive trade environment:” ideally, it’s an environment in which women feel empowered to pursue the role of exporter and entrepreneur. It’s an environment where women consider it natural to explore markets beyond their own country to sell their products. This type of trading environment also ensures that the national regulatory systems in the countries of origin and the countries of destination for women’s products and services will be fully accessible, transparent and enabling.

Ensuring full participation, equal treatment and sustainable involvement of women in local and larger enterprises remains, even today, a big challenge. The Chile-Uruguay and Canada-Chile FTAs are only small steps in the right direction, which need to proliferate throughout the globalized marketplace. One way to achieve that is for one or all three of the countries — Chile, Canada and Uruguay — to propose that an extended version of their chapters on gender and trade should act as a model for other nations to adopt. This chapter can serve as a gentle proposal — a nudge toward the other 121 WTO member states, or any other country that may not have joined in the declaration but still values women’s economic empowerment.

Both of the aforementioned FTA chapters are very similar in language and structure, framing the gender chapter in socio-economic terms. Specifically, they depart from rights language, making the chapter more attractive, perhaps, to many countries that insist on the conventional view that “human rights and trade do not mix.” Beginning the text of the gender and trade chapters by emphasizing “sustainable socioeconomic development,” “inclusive economic growth” and “equitable opportunities” hints at unleashing the untapped potential in many economic sectors. This, for many countries, could mean changing the profile of a locally focused sector to be more open to trade, potentially claiming a better place for certain national products and services in export markets and enjoying a larger share of global markets.

The proliferation of such chapters in FTAs and other economic agreements would facilitate the collection of gender-specific trade and economic data. Moreover, multiple chapters linking different countries will allow for the development of a collective “gender lens,” a process of becoming aware of the impact of trade policies in sectors where women are most active, or ones that are gender-imbalanced with limited female participation. Collecting data and acquiring a gender-conscious perspective are the two stages needed before drafting and adopting more inclusive trade policies.

At the same time, national implementation strategies cannot be limited to the establishment of committees, data collection, cooperation activities and consultations. A partial response to gender and trade concerns will not bridge the current very large gap between men and women in international trade. In the national context, countries implementing these agreements must move beyond the language of cooperation and determine next steps, such as loan facilitation, educational programs and other policies that will lower entry barriers for women.

Skeptics might raise some objections on the model chapter proposal. Some may see it as simply an add-on, which pays lip service to gender issues but does not solve any problems on the ground. The counter-argument to this is that it is better to include a chapter in new agreements that does little for women in trade than to have no gender lens whatsoever. Model laws and model agreements have been used as a softer mechanism, instead of treaties, to assist governments in areas where convergence in law would be beneficial, yet there exists little momentum to achieve consensus through a multilateral or other international agreement.

A prominent forum for developing model laws is the United Nations Commission on International Trade Law, which, for decades, has been using model laws to facilitate cross-border transactions and promote cooperation among countries in areas such as contract law and e-commerce, without the pressures of signature and ratification of international agreements. Elaborating on a model gender chapter with more provisions could allow for various versions suited to bilateral investment treaties, preferential trade agreements or other agreements that contain economic cooperation elements.

Before criticizing the idea of a model chapter as a neo-colonialist undertaking, it should be noted that the Global South has shown leadership in initiating a gender-sensitive approach to trade. Chile would be a great country to lead such an initiative, as the country is a front-runner in gender-aggregated data collection and is a partner in both the aforementioned FTAs. Canada should be a strong ally of an FTA network that supports gender and trade, since it would fall directly into the progressive trade agenda. In fact, proposing a model gender and trade chapter provides an excellent trade leadership opportunity for any of the 121 WTO member countries that signed the 2017 declaration in Argentina.

Given the strong support for the declaration and the emergence of a new trend toward including gender chapters in trade agreements, it is time to adopt a gender-positive trade agenda that prioritizes the sustainable economic empowerment of women. A model chapter, if adopted by more countries, can inspire many actors into gender-positive action and encourage the establishment of better national regulatory frameworks.