Christine Lagarde Could Still Go Down

Christine Lagarde’s job is safe. Far less secure is her legacy as managing director of the International Monetary Fund 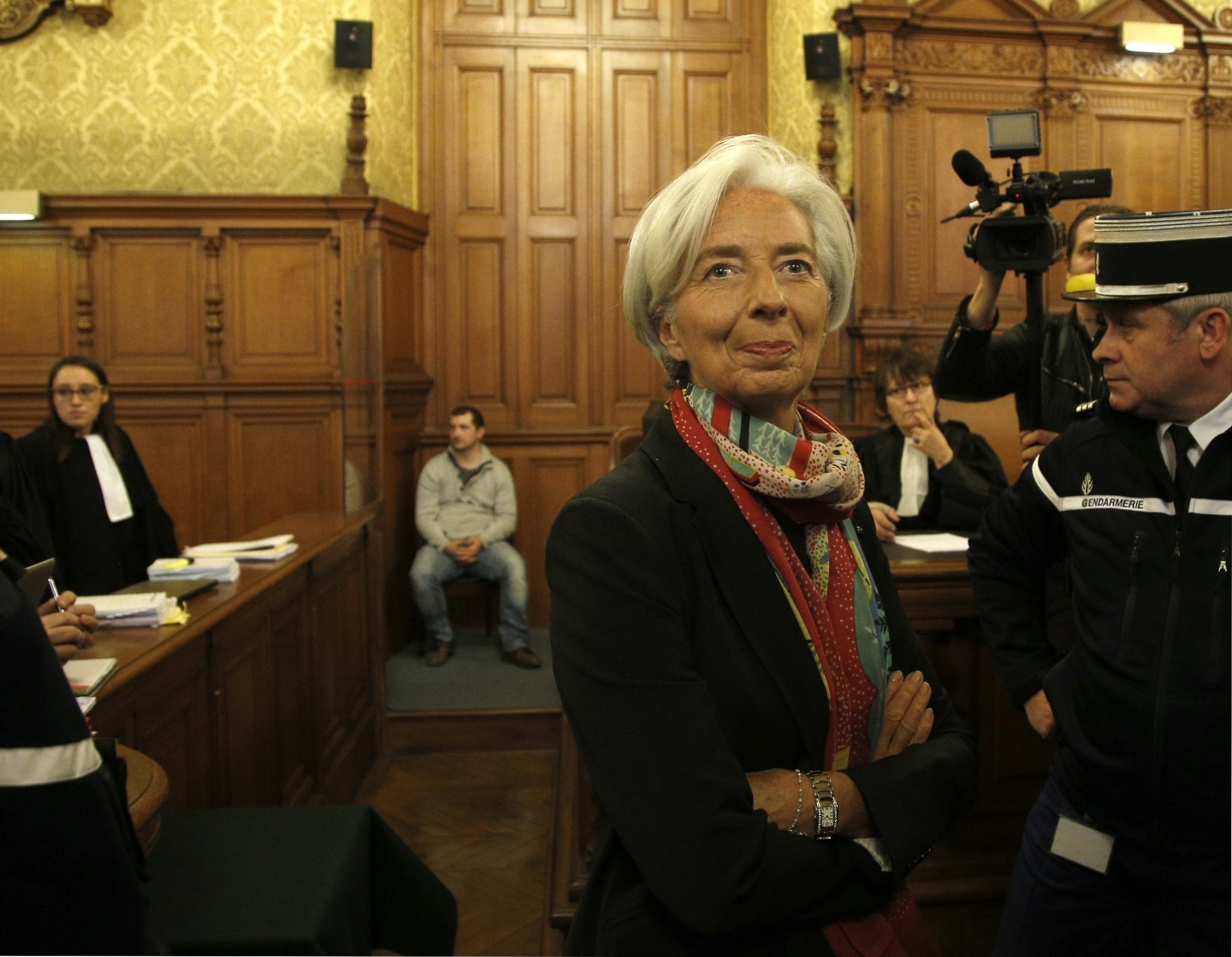 Christine Lagarde’s job is safe. Far less secure is her legacy as managing director of the International Monetary Fund.

Hours after a Paris court convicted her on Monday of neglecting her duties while serving as French finance minister several years ago, the IMF’s executive board declared its “full confidence” in Lagarde and said it “looks forward to continuing to work with the Managing Director to address the difficult challenges facing the global economy.” The statement by the board, which represents the IMF’s 189 member countries, swiftly quashed speculation that Lagarde might have to step down in disgrace as did her predecessor, Dominique Strauss-Kahn, when he was arrested on charges of sexual assault in May 2011.

Nobody should be surprised that Lagarde received such unhesitating endorsement. Her stewardship of the IMF has drawn largely rave reviews — she was a shoo-in for reappointment this year to a second five-year term — and the fund has benefited from a dramatic improvement in its public profile since she took over. Indeed, she enjoys something akin to rock-star status among international civil servants, hopscotching the globe to laudatory media coverage that lends authority to her pronouncements large and small. Her commanding aura, leavened with femininity, is only part of the explanation; also fueling her popularity are her initiatives for the IMF to focus on issues such as gender disparity, income inequality, and climate change. Illustrative of the phenomenon was her appearance on The Daily Show in February 2015, when thunderous audience applause welcomed her to the stage, followed by an amiable interview with host Jon Stewart — a public relations tour de force that her staid predecessors could never have dreamed.

Moreover, the case against her was hardly overwhelming; she stood accused of having failed to appeal arbitrators’ award of a questionable 400 million euro government payment to a tycoon allied with then-President Nicolas Sarkozy. She had a plausible explanation for her actions, and even the prosecutor described the evidence regarding her alleged misuse of public funds as “very weak.” The court ruled that despite its verdict, no punishment was merited.

Small wonder, therefore, that IMF member countries chose to overlook Lagarde’s alleged transgressions and renewed her leadership mandate. But she will need a great deal more skill and luck to navigate the perils confronting the fund during the four years remaining in her second term. Two problems stand out as threats that could sully her record and impair the institution she heads.

The first is the Greek crisis, which is heading for yet another showdown after seven years of economy-crushing turmoil. Many at the IMF — its staff, management, and board — are anxious for the fund to redeem itself for mistakes it made during the crisis in the eurozone, most notably in Greece, the recipient of the biggest bailout loans the fund has ever provided to any country. Some of the most questionable decisions were taken in 2010, when Athens first tottered on the brink of a debt default, and in early 2011 — before Lagarde took the IMF’s helm. But some came on her watch.

Under pressure from powerful, austerity-minded European policymakers, the IMF joined in rescue programs for Greece in 2010 and 2012 that piled debt atop debt and imposed excessively harsh conditions on the Greek government. The bailouts were based on highly optimistic assumptions about the capacity of the economy to recover and of Athens’s ability to continue paying its obligations. As the absurdity of those assumptions — and the nonsustainability of Greece’s debt — became increasingly evident, the IMF came under fierce criticism for having bowed to demands from European capitals that exercise disproportionate influence over its policy. That sapped the institution of its most precious asset — its credibility as an independent, neutral arbiter of how to fix economic and financial problems that beset countries, regions and the world as a whole. That credibility is especially crucial when it comes to quelling crises, because financial markets will lose confidence in the IMF’s pronouncements and analyses if they deem it overly susceptible to political meddling.

To Lagarde’s credit, the IMF finally broke publicly with Europe in mid-2015 as the terms of Greece’s third bailout were negotiated. Although the fund had gone along in prior years with assumptions that the Greek government could generate huge budget surpluses out into the future that would enable Athens to pay down its debt, IMF officials were unwilling to endorse such fairy tales again. The IMF has argued, rightly, that such demands are unrealistic and counterproductive for the recession-battered economy; instead, Greece’s European creditors should write off much of the debt Athens owes them. But the German government is particularly adamant in rejecting debt forgiveness, and it is possible that Lagarde will ultimately agree to a stitch-up based on credulity-straining projections that the Greek authorities will fix their economy’s woes. That would spare Angela Merkel, Germany’s beleaguered chancellor, from an additional political setback, but it would leave the IMF vulnerable to charges that it had once again compromised its technocratic integrity.

The second, potentially much more worrisome threat to Lagarde is the impending presidency of Donald Trump. Some of the views she has embraced that excite Daily Show audiences — among them, the need for international action on climate change and the economic benefits of migration — are not going to endear her to the new U.S. administration. The same goes for her warnings against the dangers of protectionism — she gave an interview during the campaign to the Financial Times using the word “disastrous” to describe trade barrier-raising policies of the sort promised by Trump (although she was careful to avoid mentioning him by name). Perhaps most problematic of all is the IMF’s pronouncement last year that China’s currency is “no longer undervalued,” which is clearly at odds with Trump’s vow to declare Beijing guilty of unfair currency manipulation.

The United States is the IMF’s largest shareholder, with 16.5 percent of the voting power on the board. That obviously isn’t enough by itself to force changes in IMF policy or personnel, but the fund’s ability to function could be severely jeopardized in the event of a major clash with the White House. American leadership has been essential to the institution’s effectiveness since its creation at the end of World War II, and the board operates on a tradition of consensus.

Uncertainties abound. Perhaps the IMF will escape the notice of Trump himself; oversight of the fund is the responsibility of the Treasury Department. But in view of the president-elect’s behavior since his victory, it hardly seems inconceivable that he might take great umbrage at something Lagarde said or did. Is it so difficult to imagine, for example, tweets emanating from the @POTUS account accusing “Negligent Christine” of missing the boat on the Chinese renminbi? And couldn’t such acrimony lead to Trump demanding, say, that the U.S. representative on the IMF board exercise his or her power to thwart the managing director’s agenda? Or even demanding a U.S. withdrawal, as he has threatened regarding the World Trade Organization?

As a result, Lagarde will be obliged to make sure she doesn’t gratuitously inflame tensions with the U.S. administration. At the same time, however, undue silence or namby-pamby utterances in the face of policies that menace the global economy would make the fund appear utterly feckless, dooming any pretense it has as a “ruthless truth-teller” to the world’s governments.

Charm, intellect, leadership talent, and public-spiritedness have taken Lagarde far. All of her resourcefulness will be essential if she is to leave her job with anything resembling the esteem in which she is currently held.