Is Collective Action Essential to Avoid Another Crisis?

The global financial crisis has naturally revived interest in collective action to ensure that policy makers will 'never again' suffer the economic consequences of financial market failure on as spectacular a scale as happened in 2007. However, in the few short years since the heady days of the 2009 G20 summits in London and Pittsburgh promised international cooperation to root out the apparent misdeeds of financial markets, interest in collective action has waned considerably.

Alas, the state of international cooperation has fallen victim to neglect for entirely predictable reasons. First, acting for the most part to serve their self-interests, countries most affected by the crisis intervened almost simultaneously thereby giving the impression of coordinated global action on the fiscal front. The variety and intensity of fiscal stimulus programs enacted around the globe differed considerably, as have fiscal consolidation policies (see the IMF’s World Economic Outlook 2010 Chapter on the subject), and the fact that economies in Asia and other emerging markets did not always feel the need to join in gave them somewhat of a 'free ride' that helped soften the blow of the global downturn. Then, having congratulated themselves on avoiding another Great Depression, politicians in the industrial quickly reverted to type by assigning the technical task to redesigning the world's financial system to unelected officials, typically central banks.

In The Logic of Collective Action, first published in 1965 (an under-appreciated classic work by the political economist Mancur Olson), he explains why collective action usually fails and can even produce perverse results. There are built-in incentives for group members to engage in ‘free riding’ and the larger the group (think G20 versus G7 or G8) the larger are the costs of collective action.

I was reminded of the lessons of this superb piece of academic work when observing the inability of Americans to deal with their fiscal problems as well as the ongoing crisis in Europe. Many analysts emphasize a failure of governance (e.g., see example) as the source of the continuing strains in the world economy. Examples include the failure of the G20 to take decisive steps to raise confidence in the public that politicians have come to grips with what ails the world economy, or the inability of the IMF to persuade key members that they have a shared interest in absorbing the costs of dealing with the consequences of profligate fiscal policy in Europe. The fact that fiscal consolidation appears to be implemented in a seemingly incoherent fashion, with a lack of clarity about how long it will take for 'normality' to be restored, has certainly not helped.

Nevertheless, those who feel that a dose of improved global governance is all that it takes sadly confuse necessary and sufficient conditions for this to happen. Improved rules of conduct in global finance that adequately take into account the inter-connectedness of financial institutions and systems will not be enough to resolve problems in the global financial architecture. These will come to nothing unless the necessary conditions of transparency and accountability are also met.

Monetary policy has made impressive strides over the past two decades to convince the public and policy makers of the desirability of price stability precisely because central banks and governments made clear where accountability lay for the failure to achieve numerical objectives. Even the US Federal Reserve and the Bank of Japan have now come to the conclusion that a price stability objective is a desirable metric to evaluate central bank performance. Transparency then becomes the natural device to convince markets that central banks mean business and that the risks that stated objectives may not be met need to be clearly and convincingly explained. Otherwise, central banks risk a loss of credibility and, if this occurs persistently, a loss of reputation. Once lost, reputation is very difficult to regain.

Now, as politicians have explicitly, or by default, assigned a financial stability role to central banks, we are once again entering a murky world where there is insufficient transparency and even less accountability. For example, some so-called macro-prudential instruments are the direct responsibility of the central banks (e.g., dealing with the risks of the inter-connectedness of banks) while others remain in the hands of finance ministries or the supervisory authorities (e.g., down payment requirements, deposit insurance, commercial bank performance).

Still, nobody is sure how to measure the elusive concept of financial stability and there is even less clarity about who is accountable the next time things go wrong. We are simply told that the problem is complex. Accordingly, there is a gaping void in policy making. Needless to say, on a global scale, this makes the problem of finding cooperative solutions that much more hazardous and unlikely. As a result, the Financial Stability Board, chaired by Bank of Canada Governor Mark Carney, has its work cut out. Another worry is that the same central banks that fought the good fight to deliver low and stable inflation, may now be taking their eyes off the ball and risk ending up having to put down a potential future inflationary flame when it is too late. This is precisely what happened during the 1970s and early 1980s and several economies, including Canada and the US, suffered dearly for it.

Since much of the debate around governance questions surrounds the ongoing crisis in Europe there may still be an opportunity to learn some of the lessons from The Logic of Collective Action. If so, then the international community should ask the eurozone to take the lead which it has, so far, failed to do. The payoff, if Europe is successful, is that this may lead to greater pressure for the G20 to engage in collective action. Of course, success requires more than just declarations and revised treaties. 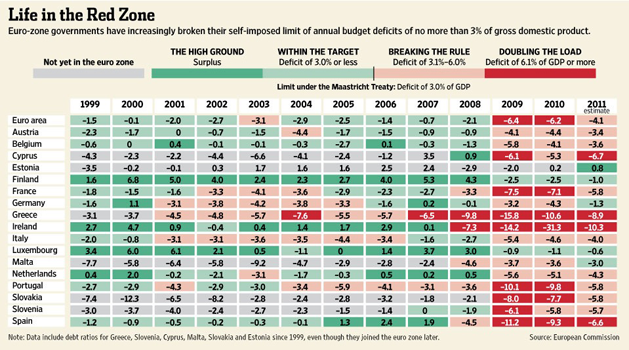 For example, the table above illustrates that there is little reason to believe that the revised Stability and Growth Pact (SGP) will fix the fiscal and debt mess in the eurozone. Very few of the eurozone members have ever met the old SGP criteria and there is little reason to believe that the new ones will be met any time soon. The European Commission, tasked with oversight in these matters, is in a relatively weak position to police member states who fail their budget targets. It simply lacks the necessary authority to do so. It is also uncertain how European courts can overturn the sovereignty of the highest courts in each one of the member countries.

As The Economist recently reported, the current situation is straining Germany's Basic Law, the core piece of legislation central to the country's statehood. Ultimately, if Europe cannot agree on a common approach for banking supervision or pooling some of its debt to sustain a single currency then why should anyone believe that the G20 will be more likely to devise a collective approach? After half a century of slow and deliberate movement towards the creation of a single market and currency, the European project seems only a crisis away from falling apart.

The problem is that the location of accountability is unclear while there are lingering doubts about the transparency of some countries' fiscal institutions. There is still, for example, no real exit strategy from the eurozone for a member who misbehaves, nor has any thought given to a sunset clause to ensure that future politicians, whose hands will not be tied by their predecessors, are forced to revisit rules of conduct in economic policy appropriate for the circumstances they find themselves in.

I was also reminded of this at the recent World Congress of the Public Choice Society where there was a discussion of so-called 'hybrid' governance models. These are intended as improvements to existing models of good governance. The idea is to supplement current governance structures with a requirement that members of a group who agree to some collective action can be expelled or can voluntarily withdraw (exit strategy), as well as the recognition that the world is dynamic and that rules and regulations ought to be revisited from time to time (sunset clause).

I am skeptical that such modifications can 'solve' existing governance problems. With hybrid rules members of a group will be less committed to collective action if they can exit at a reasonable cost, or if a recalcitrant member simply chooses to wait it out until the sunset clause kicks in. Olson’s work anticipated all of these possibilities. Indeed, he saw the perverse possibility of a minority holding the majority hostage (Greece vis-à-vis the rest of Europe?) thereby diminishing the desire for collective action. European governance fails because politicians ignore the possibility that the group may be better off without one of its members and impose conditions for violating the spirit of collective action that are not credible and perhaps unenforceable (e.g., the revised SGP).

If collective action through the G20 or the IMF can be made to work then let Europe show the way. Until this happens, the best we can hope for is that nations consult with each other and seek to do 'no harm' to others when it comes to economic and financial policies. Adam Smith was right. Self-interest guides nations as much as it does individual behaviour but he also warned that groups have a tendency to conspire against the common good. The only way to forestall this tendency is to insist on as much transparency as possible and clearly define the location of accountability for any collective action.

Having congratulated themselves on avoiding another Great Depression, politicians in the industrial quickly reverted to type by assigning the technical task to redesigning the world's financial system to unelected officials, typically central banks.
The opinions expressed in this article/multimedia are those of the author(s) and do not necessarily reflect the views of CIGI or its Board of Directors.