Strident digital, surveillance and diplomatic policies are being written in the heat of a disaster — not through deliberation or agreement, but through escalating protectionist declarations US Vice President Mike Pence speaks during a coronavirus briefing with diagnostic lab CEOs at the White House on March 4, 2020. (REUTERS/Carlos Barria)

The outbreak of COVID-19 in China’s Hubei province has been called a lot of things: a public health emergency of international concern, an “infodemic” and an era-defining test of the Chinese government’s leadership. Of course, all of those things are true. But the outbreak also sheds light on something else that’s drawn much less attention so far: the extent of state power in digital spaces.

In February, in an uncommon move against the international press, the Chinese government expelled three Wall Street Journal reporters, ostensibly as a reaction to the paper’s publication of a controversial opinion piece focusing on China’s response to the emergence of the 2019 coronavirus, which causes COVID-19. The journalists had nothing to do with the piece, but the incident was notable as an unusually disproportionate measure to control a foreign media outlet.

The day before the ousting, the United States announced a new policy position treating Chinese state journalists as official representatives of the Chinese state and intelligence apparatus, which is similarly unusual. Earlier in the week, the United States brought criminal racketeering charges against Huawei, a partially state-owned telecommunications infrastructure and services provider. The week before, over the objection of experts, the US government introduced a range of travel security procedures and bans, ostensibly aimed at helping contain the COVID-19 virus — despite doing very little testing for the disease at home.

Even if there was uniform agreement that these digital exertions of power were effective — and there isn’t — there are very few mechanisms to articulate, check or challenge the digital limits of state power during a time of crisis.

Concerningly, the use of such adversarial tactics comes at a time when the United States’ diplomatic corps and capacity are at historic lows — having eliminated the positions that oversee epidemic response, and appointed Vice President Mike Pence as the lead of the American efforts. In and of themselves, these tensions are remarkable, but they also frame the ways in which the world’s most powerful governments respond to a global pandemic.

Epidemic response is a rare circumstance in which governments make sweeping decisions about the collective good and take unchecked action, often in contravention of individual human rights. In times of emergency, governments limit freedom of movement, seize and monitor privately collected data, and expedite the development of treatments and vaccines. In democratic societies, those powers are typically held in check by the legislature or law enforcement — but in almost all cases, those powers are exerted domestically. The growing emergence of far-reaching international epidemics poses a range of coordination challenges, many of which are complicated by negotiations over state power and access.

The global influence of technology and the abundance of personal data are already changing the balance of power between governments and citizens. In 2015, the Government of South Korea contained an outbreak of Middle East Respiratory Syndrome (MERS) by quarantining 17,000 people — in part, on the basis of their seized mobile phone records. During the West African outbreak of Ebola, international response organizations helped set up national, real-time mobile surveillance systems in several of the most affected countries.

And, these kinds of exercises are also being deployed to contain COVID-19. Early on, in order to find a suspected carrier of the COVID-19 virus, the United States used Uber records to track the patient to Mexico, which then caused the company to block another 240 drivers. Recently, US President Donald Trump called COVID-19 a “hoax,” perpetuated by his political opponents, before walking the remarks back. Similarly, Taiwan’s foreign minister accused the Chinese government of waging “cyber war” in order to effect its COVID-19 response. Even if there was uniform agreement that these digital exertions of power were effective — and there isn’t — there are very few mechanisms to articulate, check or challenge the digital limits of state power during a time of crisis. 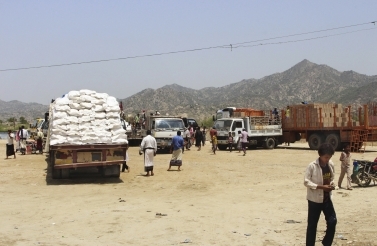 Recommended
What Can Data Governance Learn from Humanitarians?

That’s concerning enough as a domestic policy issue, especially amid the growth of digital surveillance technologies, but it’s even more concerning in the middle of a global health crisis. With at least 67 countries reporting cases of the virus, that’s 67 governments managing a public health emergency, generating and consuming data in varying ways about the disease, and trying to consider the growing (and fragmented) global response. The logistical undertaking involved in the response to the outbreak is staggering and would be a serious test of global public health institutions even in the best of circumstances.

These are not the best of circumstances.

The international response to COVID-19 is happening amid one of the most precarious moments in diplomatic history. The United States has been escalating a trade war with China and applying geopolitical pressure through proxies. The United States was also on the brink of war with Iran just a few weeks ago. Now, all of these countries are experiencing significant increases in infections within their borders — and all three governments are facing significant criticism for using the response to score political points instead of ending the outbreak. The head of the World Health Organization (WHO) recently warned that the window to contain the epidemic is closing — and some experts are suggesting it’s time to prepare the public for a pandemic.

Beyond specific geopolitical tensions, the news ecosystem surrounding the outbreak is unfolding amid historic concern over misinformation and disinformation. Already a number of states (and state-friendly platforms) are using the media to try to influence public opinion about the outbreak. Information was censored on Chinese social media platforms. Russian state television spread the theory that Trump actually manufactured the disease. And Rush Limbaugh, an American far-right commentator (and recent recipient of the Presidential Medal of Freedom), said that “this coronavirus thing” is a conspiracy to undermine Trump. The trend of using global emergencies to make political points is hardly new, but because of the power of the internet, it’s never been easier or more damaging. The WHO itself is facing challenges to its credibility for supporting China’s response.

Amidst rumours that Iran has lost control of the epidemic, Turkey and Pakistan have closed their borders. The epidemic has surged in Italy and South Korea, leading both to implement large-scale quarantines over the weekend. And the world economy is bracing for large negative impacts as spending, manufacturing, and travel all slow. The U.S. Stock Exchange reacted by having two of its worst days on record just last week.

The largest difference between an epidemic and a pandemic is the way we respond. Epidemic response focuses on isolation, surveillance and control — all in an effort to use social controls to contain and, hopefully, eliminate the pathogen. Pandemic response lets go of social controls, acknowledging their failure, and invests in public health infrastructure to begin systemic response. Large spikes in the number of infected in Italy, Iran, and South Korea are clear signs that we may be beyond containment.

It’s all too predictable that the digital tools, tactics and powers that we develop during this response will lead to future attempts to manipulate markets, borders and politics.

It’s worth asking ourselves, as information politics continues to define very real borders and markets, whether our approach to the infodemic is on a similar brink. The international policy community’s focus on misinformation and disinformation, for the past several years, has focused on a strategy of containment and blame. As the consequences of disinformation during emergency continue to escalate, so does the incentive to invest in the quality and governance of public information infrastructure. We may find that misinformation, much like this new virus, is beyond the world’s powers to contain, and the best thing we can do is mobilize systems of digital diplomacy and adapt.

Unfortunately, the tools and tactics of social control that we develop during a public health crisis get repurposed, after the emergency, for political means. The social licence created to use call records, for example, has been repurposed for traffic analysis. It’s all too predictable that the digital tools, tactics and powers that we develop during this response will lead to future attempts to manipulate markets, borders and politics.

Often, great tragedy inspires reinvestments in shared standards and governance. Some of the most important international biomedical ethics laws and institutions were founded in the wake of World War II — based on the findings of the Nuremberg Doctors Trial and the resulting Belmont Report. While the effects of the COVID-19 outbreak can’t be compared to the scale of mortality or global concern caused by World War II, it is worth asking what amount of disaster we’ll need to endure in order to build public health information infrastructure that can be trusted.

This epidemic has come at a time when the world’s diplomatic relations are strained. In this environment, strident digital, surveillance, and diplomatic policies are being written in the heat of a disaster — not through deliberation or agreement, but through escalating, unilateral declarations of protectionism. In addition to demonstrating the fragility of the world’s public health and public information systems, the COVID-19 crisis is also exposing the fragility of international diplomacy and its digitalpolitik — the use of digital statecraft to advance political interests. If the system is to heal, we’ll have to invest in diplomacy — digital and otherwise — or the next disaster may do more than illustrate the system’s fragility.