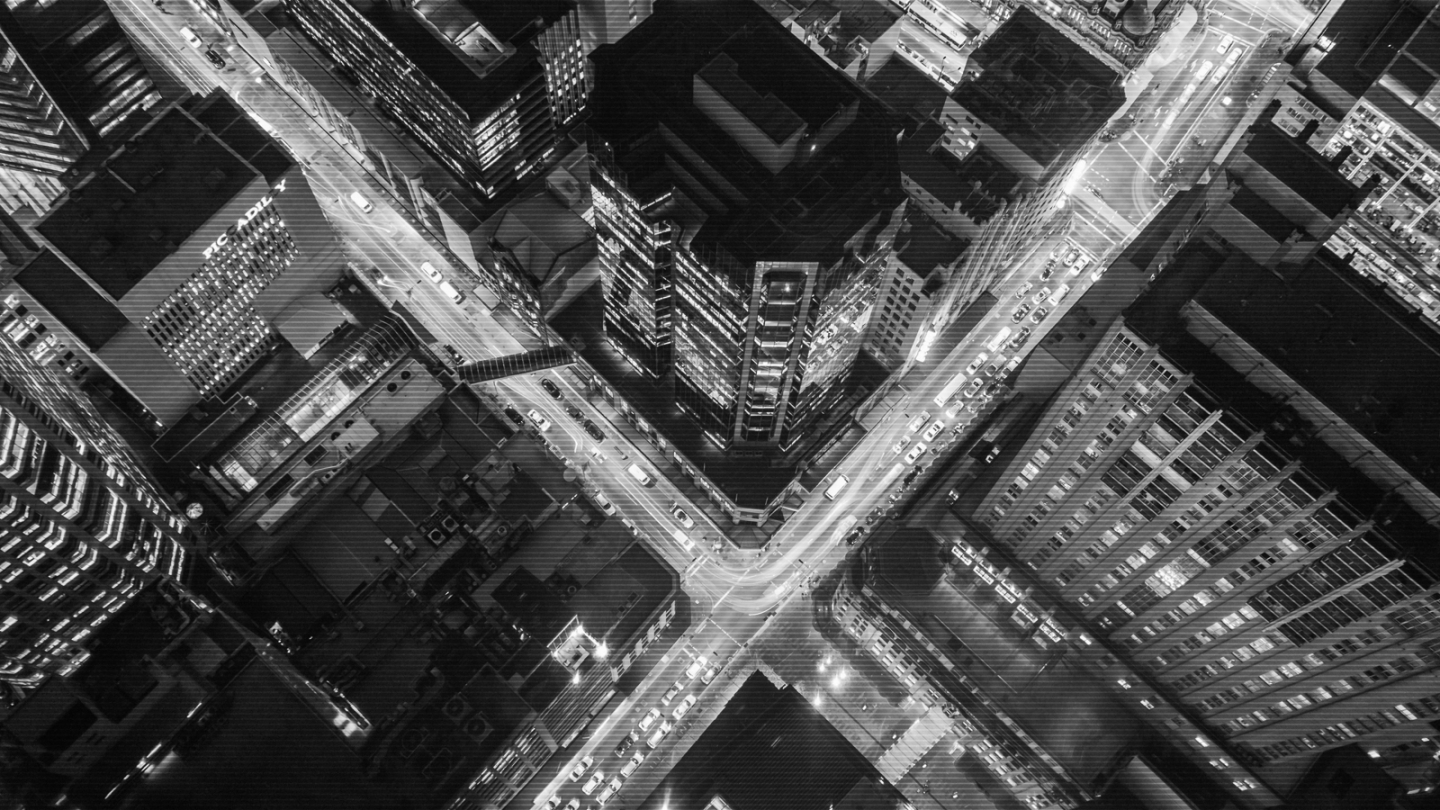 Critical infrastructure consists of the systems that have been deemed fundamental to the functioning of a society and an economy, such as energy, transportation, telecoms, the provision of food and water, and vital health services. The disruption or destruction of critical infrastructure would have an immediate and direct impact on the economic activity, day-to-day life and safety of those affected.

The advancement of cyberweapons and hackers' tool kits now permit malicious actors to attack critical infrastructure in ways that have an immediate and frightening effect on the physical world. In 2015, Ukraine was the subject of a shocking cyber attack that managed to disable a portion of the nation’s electrical grid (Greenberg 2017). The attack, widely believed to have been carried out by Russia, intentionally caused widespread blackouts for hundreds of thousands of people. Although the attack and similar incidents directed at Ukraine in the years that followed were only temporary disruptions, they provide ample evidence of the scale of damage that cyber attacks could inflict on critical infrastructure. Hospitals had to return to using pens and paper during the attack, jeopardizing the delivery of services to those who urgently needed them (Borys 2017).

The disruption or destruction of critical infrastructure would have an immediate and direct impact on the economic activity, day-to-day life and safety of those affected.

Digital technology has made the world smaller, and critical infrastructure in Western nations is not safe from this new danger. The US government has denounced Russia for infiltrating the country’s power grid and gaining remote access to energy sector computer networks (US Department of Homeland Security 2018). In 2017, the WannaCry ransomware epidemic disabled Britain’s National Health Service for several days, leading to the cancellation of 19,000 appointments (Field 2018). In Denmark, the headquarters of Maersk, responsible for around one-fifth of the world’s shipping, was brought to a standstill by the NotPetya malware, causing transportation disruptions at port facilities worldwide (Matthews 2017). Sophisticated actors can insinuate themselves into vital control systems and remain dormant and undetected for long periods of time before the right moment to strike presents itself.

What makes the potential consequences of a major cyber attack on critical infrastructure difficult to predict is the interdependence between various sectors. An attack on one sector could have spillover effects on the other sectors that depend on it. The transportation sector depends on the provision of electricity by the energy sector to power trains and traffic control systems, just as the energy sector relies on the timely delivery of fuel and other inputs through the transportation sector. With respect to the threat of remote infiltration, a working group of industry experts and government officials at MIT’s Internet Policy Research Initiative warned that no one currently understands the extent to which electricity generation is coupled with other sectors, and therefore the risk of “catastrophic macroeconomic failure” in the event of a cyber attack is not adequately known (Brenner 2017, 28). Arriving at a proper comprehension of the interdependency between critical infrastructure sectors is vital in order to fully appreciate the inherent risks. 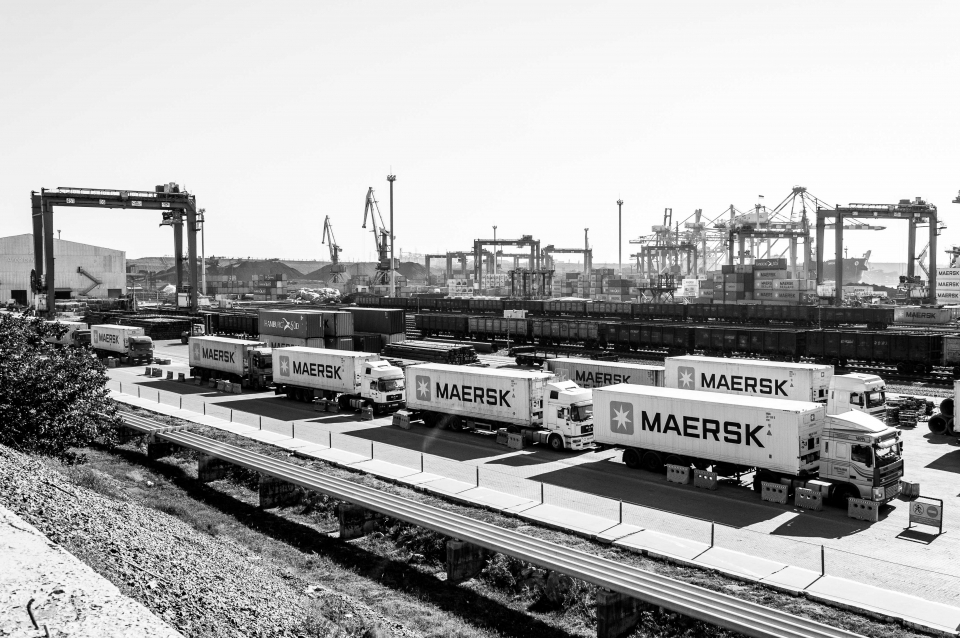 The headquarters of shipping company Maersk were brought to a standstill by the NotPetya malware in 2017, causing disruptions at ports around the world. (Photo: Ninelro / Shutterstock.com)

There are two basic varieties of threats to data flows: threats to availability affect whether the data can be accessed when it is needed; and threats to confidentiality and integrity concern data being disclosed or changed without the reliant party’s knowledge or approval.

The metrics and analysis presented here are drawn from earlier work, in which the survey and data collection methodology are documented (ibid.). In sum, more than 100 security and communications executives from all critical infrastructure sectors were asked detailed questions about the sensitivity of information they send and receive from all other critical infrastructure sectors, in order to quantify “inbound” versus “outbound” data dependency.

Inbound data dependency is about information and data being delivered to, and consumed by, a critical infrastructure organization. Information and data arrive in the form of voice calls, internet-based business systems and services, and even social media and other employee activities. Inbound dependency, therefore, involves the cyber security properties of information needed by critical infrastructure organizations to continue the production of goods or services. For instance, how long can a water treatment plant continue to operate safely without information from testing laboratories in the health sector? Inbound data dependency is related to the vulnerabilities of a sector that are caused by interdependency.

Sector-specific Dependency Analysis: Energy Sector
The energy sector is primarily concerned with electric power generation and transmission, as well as oil and gas production and storage. Energy is often considered a “super critical” infrastructure because most other critical infrastructure sectors cannot operate if energy is not functioning. The following tornado diagram (Figure 1) is used to illustrate the energy sector’s inbound and outbound data dependencies and the resulting cyber vulnerabilities and threats. The diagram is divided vertically by an axis that is valued at zero. The left side displays the median inbound data dependency values for the energy sector, in descending order from highest to lowest. The right side displays the outbound data dependency values for each of the sectors (that is, how do other critical infrastructure sectors depend on the data from the energy sector?). 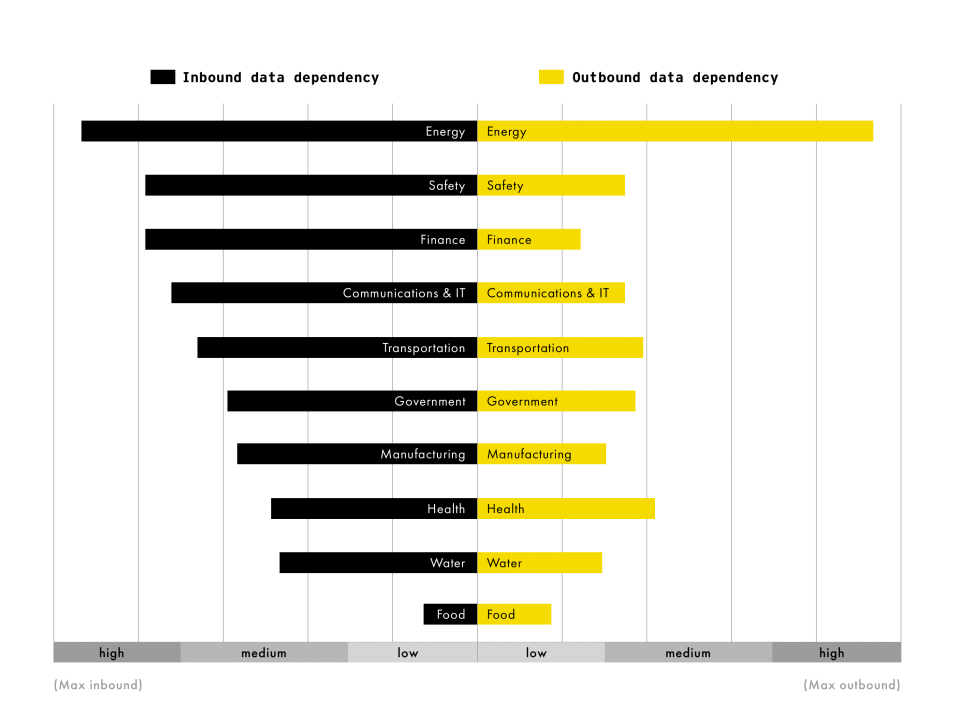 Intra-sector data dependencies are typically strongest among critical infrastructure sectors. Energy is the largest consumer of its own information and data as a result of the tight supply chain linkages between different organizations, for instance, in production versus distribution of both electricity and fossil energies.

As shown on the left side of the diagram, the energy sector is a large consumer of data from other sectors and expresses the highest overall inbound dependency and, therefore, cyber vulnerability to critical infrastructure interdependency. Energy’s inbound data and cyber requirements are heightened relative to other sectors by the high standards around energy supplies mandated by clients and government. Loss of data flows from within the energy sector itself is a serious vulnerability that might be exploited by a variety of different threats, such as unauthorized access to control systems, or an impact on energy generation when critical data flows required for plant operation are rendered unavailable.

Information and data from the safety sector (which includes law enforcement and first responders) is the second-highest inbound dependency for energy. The inability to receive security reports would significantly impair the energy sector’s ability to prepare and respond to incidents that might impact operations. This may also suggest that unauthenticated or spoofed data purporting to be from the safety sector could represent a potential pathway for cyber attacks.

Canadian and US energy grids are intertwined, such that a cyber attack that disables electricity supply in the United States could have second-order effects for Canadian critical infrastructure.

Governments have an urgent need to achieve a clearer understanding of the often-opaque interdependencies between critical infrastructure sectors, and to take steps to mitigate the chances of cascading chain reactions. Industry experts have suggested that government could have a role to play in coordinating stress test exercises and simulations between critical infrastructure sectors, which could illuminate present weaknesses and build resilience (Brenner 2017).

The Need for a National Digital Identity Infrastructure

Patching Our Digital Future Is Unsustainable and Dangerous

The Quantum Threat to Cyber Security

The Emerging Internet of Things

VIDEO: Governing Cyberspace during a Crisis in Trust

VIDEO: Crime and Policing in a Cyber-enabled World