A Day of Reckoning with Democracy for Investors 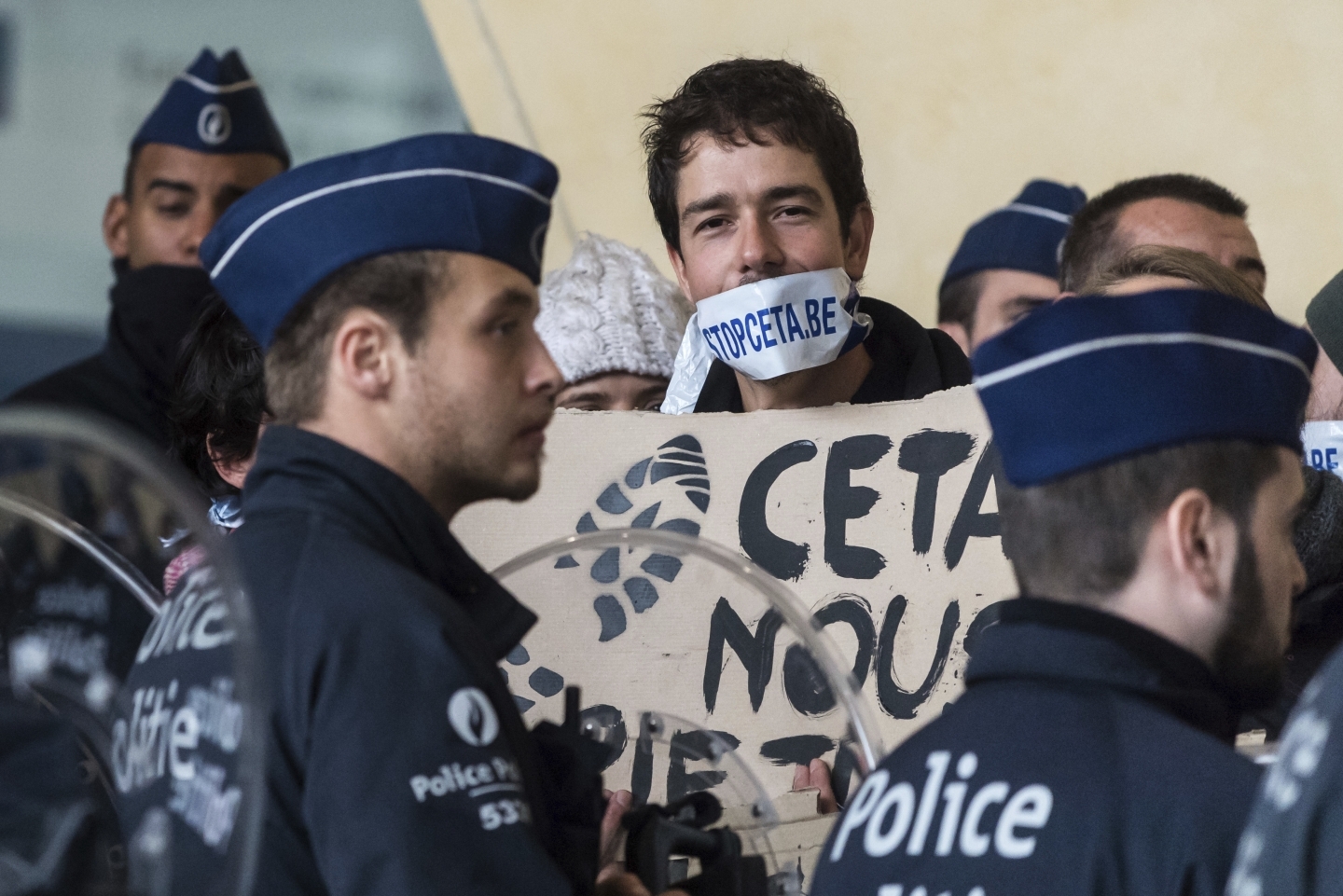 Protestors outside the EU headquarters in Brussels (The Associated Press)

The free trade agreement between Canada and the European Union (EU) is back on life support.

The Walloonian leadership has agreed to consent to have the Belgian government sign onto the Canada-EU Comprehensive Economic and Trade Agreement (CETA) subject to certain conditions. The Walloon Parliament has been withholding support, in significant part, because of the system of Investor-State Dispute Settlement available to foreign investors known by the acronym ISDS. This is a system that empowers a cadre of investment lawyers and arbitrators with authority to determine when a state has run afoul of vague rights available only to foreign investors.

According to the formal declaration released by the Belgian government, parts of CETA, once ratified by the EU Parliament, will be applied on a provisional basis. ISDS, however, will not have immediate effect. These and other provisions will await ratification by the 28 member states and 10 sub-national parliaments. In addition, the Walloons extracted a concession that the European Court of Justice be asked to determine the compatibility of ISDS with the European Union treaty. Moreover, the Declaration affirms that each of Belgium’s regional parliaments have not yet approved of ISDS in CETA, unless they determine otherwise.

There is little reason to believe that ultimate approval of ISDS will come easily in Belgium or in other national legislatures. In submissions to the German Constitutional Court, the German government indicated that it would not permit provisional application of ISDS. The Court was assuaged that this was a matter falling within member state jurisdiction. It helped persuade the Court to decline issuing an injunction preventing the German representative on the European Council from endorsing CETA.

There is good reason, then, for Canada to abandon ISDS entirely. Canada has been promoting investor protections and ISDS since 1994, the year NAFTA came into force. The decision to embark on this project was never part of a national debate. It was, instead, promoted by the executive branch in the exercise of the royal prerogative over foreign affairs. Because the Canada-US Free Trade Agreement had no ISDS, it cannot be said that the 1987 Canadian election provided an opportunity for Canadians to weigh in on the question. Canadians have not, to date, had that opportunity.

Europeans, by contrast, have recently been deeply engaged in this debate. As a consequence of objections being raised in numerous Parliaments, including Germany, European Union negotiations with the United States were suspended in 2014. An online consultation was quickly undertaken and over 150,000 respondents expressed worries about threats to democracy, policy chill, and lack of arbitral independence and impartiality. These are familiar concerns, ones that have been raised as a consequence of the numerous investment disputes to which Canada has been a party. The response of the EU Commission was to solider on and tinker only with the arbitral appointment process, rebranding it an ‘investment court.’ The Walloon Parliament, in April and again in October 2016, recognized that these changes largely were symbolic and deprived the Belgian government the requisite authority to approve CETA. With this last minute agreement, Belgium now is authorized to proceed with parts of CETA, but opposition to ISDS is likely to continue, if not intensify.

In contrast to European processes, the Canadian government prefers to keep things under wraps. The Trudeau Government, upon assuming power, quickly acceded to the EU Commission’s request to incorporate a version of its investment court model into CETA. The Prime Minister has touted it as the ‘gold standard.’ Without further explanation, there has been no debate in Parliament or opportunity for public input about Canada’s embrace of the European Commission strategy. At the quadrennial meeting of the United Nations Conference on Trade and Development (UNCTAD) in July 2016, the Canadian Government even co-hosted, with the European Union, a meeting of country delegates to promote the investment court model worldwide. Yet there has been no public debate about Canada signing onto and then marketing the European model.

If Canadian negotiators wish to salvage other parts of CETA, they should swiftly abandon ISDS. It holds few benefits for the citizens of signatory states. Despite claims to the contrary, there is no convincing empirical evidence that these commitments have the effect of attracting new foreign investment. A recent meta-analysis by economist Christian Bellak of the University of Vienna concludes that the effect of investment treaties on attracting new investment is ‘economically negligible.’ Little will be lost, in other words, if Canada were to abandon ISDS in CETA. Paul Magnette, the Walloonian President Minister, in response to questions posed by the French newspaper Libération, indicated that that the Canadian government agrees with his concerns. This suggests that, at bottom, it is the Europeans who are taking a hard line on ISDS. Other news reports indicate that this is an option still open to Canada if it is desirous of salvaging other parts of the agreement.

Whatever the fate of CETA, the lesson is clear: ISDS is having a reckoning with democracy. It is time for the Canadian government to come to grips with this fact. Canada should immediately undertake a review of our investment treaty program. It is time to evaluate whether ISDS game is worth the candle.