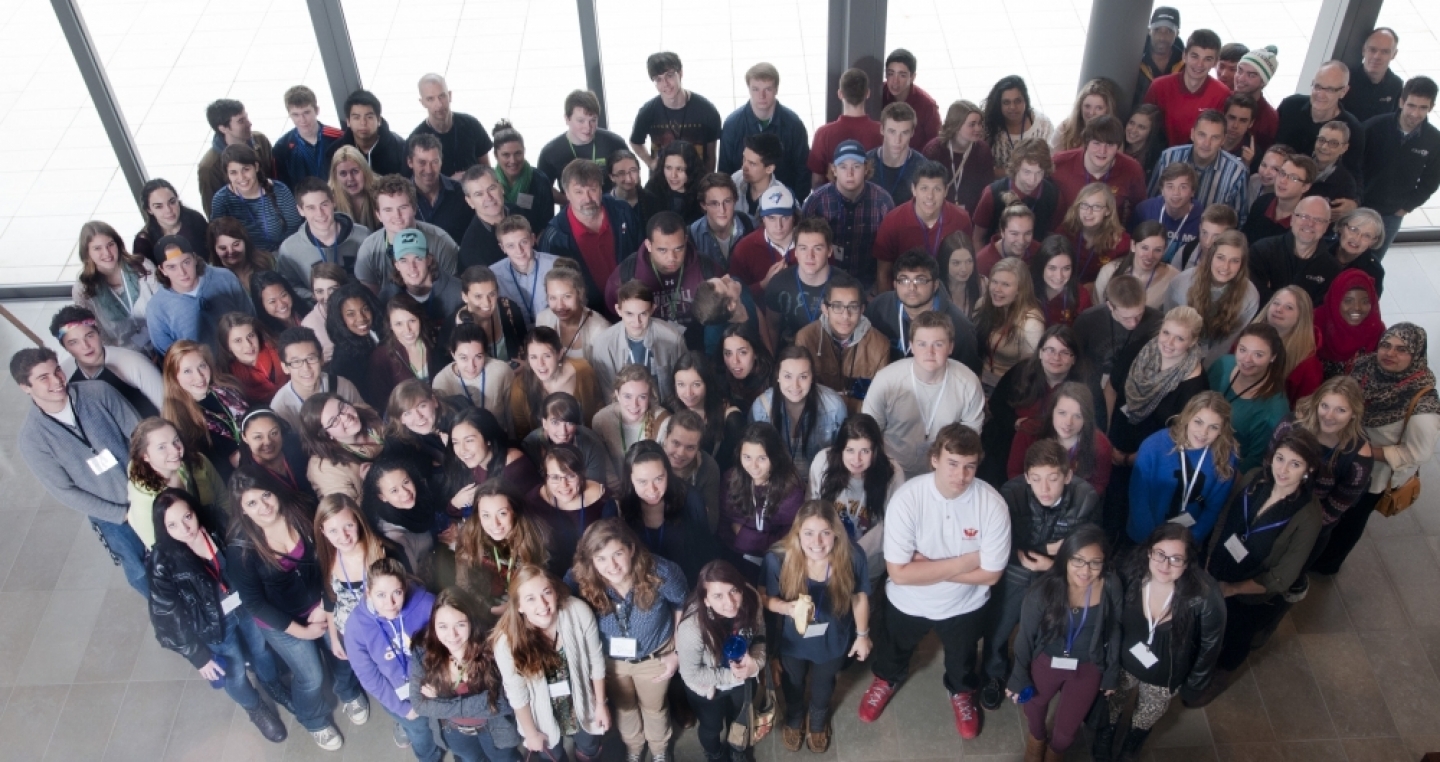 “If all my history lessons were taught by these two, I’d be quite the history buff #tellmemore #cigiGYF” (Student Participant Twitter Post). This tweet seemed to reflect the experience of many of the 150 Waterloo-region high school students who were teleported through time to learn about peace and security at this year’s CIGI Global Youth Forum. From engaging discussions, to no-holds-barred question and answer periods, students were captivated by the passion and interest of the Balsillie School of International Affairs’, Jim Blight and janet Lang and the simulations held by graduate students of the University of Waterloo.

The students’ day began in the year 1962 with a two-part multi-media presentation by Blight and Lang, who showed snippets of 1960s news commentary on the Cuban Missile Crisis, interspersed with black-and-white commercials for aftershave, hair dryers and other sixties luxury products. Spending the first half of their lecture introducing the students to the plight of media censorship and villainization of Cuban and Russian leadership, Blight and Lang set the scene for the latter half of their lecture, when they invited students to consider the mindsets of the leaders involved in the Cuban Missile Crisis.

Following a quick pizza lunch, the students split up into small groups to conduct a crisis simulation, armed with an understanding of the historical response of JFK and Fidel Castro to the 1962 Crisis. Led by graduate students from the University of Waterloo’s Faculty of Arts, the high school guests were challenged to find an optimal solution to an international terrorist crisis involving hostages at the Montreal airport in the year 2014. By taking on the role of a government official on a crisis response team, students learned to negotiate under the pressure of timelines and international attention. Students, who were invited to tweet their experience throughout the day, gave us a small window into their simulation experiences:

“I’m the chairman on the [U]nited [S]tates right now, we are peacekeepers in this terrorist simulation #cigiGYF”

“Avoiding war at all costs #cigiGYF”

Energized and excited about their experiences, the CIGI Campus foyer was filled with chatter following the simulation: the hostages, their success, their failures, their simulation leaders, “OTP” Jim and janet, and their favourite quotes of the day were all top of mind. Although there were a few simulated casualties in the workshops, the students seemed to have a much deeper appreciation of the careful decision making required by international leaders.

Seeing students engaged in learning through creative and interactive teaching was a rewarding experience for students, teachers, and CIGI staff alike. To all who were involved in bringing the event together, I echo the remarks of one of our high school Twitter participants in saying, “Thanks for making learning fun #cigigyf.”

“If all my history lessons were taught by these two, I’d be quite the history buff #tellmemore #cigiGYF” (Student Participant Twitter Post).
The opinions expressed in this article/multimedia are those of the author(s) and do not necessarily reflect the views of CIGI or its Board of Directors.