Europe and the Firewall

The Financial Times quotes French Finance Minister François Baroin as arguing for an increase in IMF resources since, having augmented the EU rescue fund by €200 billion, “Europe has done its part.”

When I was a child, my mother told me the story of the little Dutch boy and the dike. You probably know it: the boy saves his village by plugging a hole in the dike with his finger. He stays there alone and cold throughout the night until the adults of the village find him in the morning and repair the dike. The story illustrates the importance of individual initiative and perseverance; it also teaches the virtues of taking responsibility and doing what needs to be done to promote the public good.

But there is another, darker fable: it tells the story of a village that, rather than making lasting repairs, plugs a leak with a temporary patch, only to discover another leak, and then another, and so on until, eventually, the dike fails with catastrophic consequences to the village and outlying communities. The reason for the village’s errant ways is not explained. Perhaps the village was waiting for someone else to come and do the repairs for them.

In some respects, the European call for increased resources for the International Monetary Fund (IMF) reminds me of the second story; not the first. Make no mistake: I fully subscribe to the view that the euro zone crisis poses a risk to the entire global economy; history teaches us that monetary dysfunction on one continent can have profoundly negative effects on others. Everyone everywhere has an interest in the timely, effective resolution of the euro zone crisis. The longer that the crisis continues, the more uncertainty there is and the more the title of this blog rings true. Moreover, the IMF was created to promote international monetary cooperation in order to promote the public good of international financial stability. The case for an effective, legitimate and credible IMF is, in my view, unassailable.

As noted elsewhere, observing the monetary dysfunction of the inter-war period and the adoption of policies “destructive of national and international prosperity”, John Maynard Keynes concluded that international monetary cooperation was essential to get “the rules of the game” for the timely, sustainable resolution of balance-of-payments difficulties. That is why he worked to ensure that the IMF, as guardian of the Bretton Woods system, would help its members strike the right balance between financing and adjustment.

Today Europe is locked in a deflationary, debt-driven austerity spiral that is destroying employment, stalling investment and clouding global economic prospects. And, contrary to Minister Baroin’s assertion, I’m not convinced that Europe has “done its part.” After all, it has constructed a monetary union among countries that do not constitute an optimal currency area (OCA). And it has not created risk-sharing institutions that could support the union and reduce the risk of failure. But, you ask, what about the augmentation of the European firewall, the European Stability Mechanism (ESM); surely that counts for something?

The purpose of the firewall is to assure investors in euro zone sovereign bonds that the risk of default is negligible; being negligible, investors should be prepared to hold the bonds and thereby defuse the crisis. In this respect, it can help with a liquidity crisis; it is not so effective in dealing with a solvency problem. But a firewall is only effective in anchoring expectations on the good outcome if it is perceived to be effective. Building half a firewall is unlikely to be particularly useful.

Consider an example of an effective firewall. In the worst days of the financial crisis, the Fed massively expanded its balance sheet, taking responsibility for and doing what needed to be done to protect the economy (see chart below). While it raises its own set of concerns, that response doused the flames of panic and has promoted a recovery – albeit modest – that has brought unemployment down. (In contrast, Eurostat reports European unemployment at almost 11 per cent, with some countries facing Great Depression levels of unemployment and a prognosis that is not encouraging.) 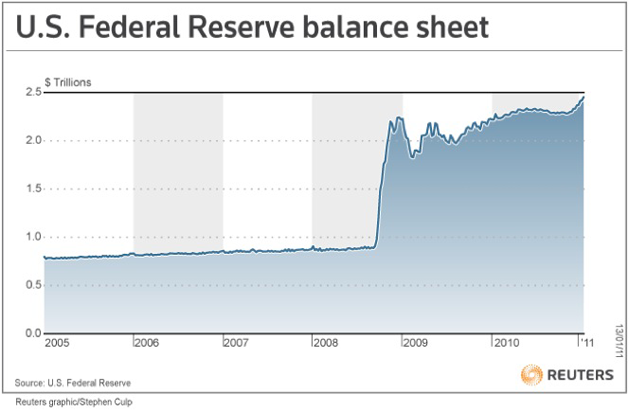 Compare that response to the European efforts to build a firewall. At each stage of the process, it has been clear that some members were reluctant to create, and then expand, a firewall, citing the potential for moral hazard (or the possibility of reducing the incentive for members to undertake the necessary, but painful adjustments that are necessary). These concerns are legitimate. But the clear division among members with respect to the firewall has undermined its effectiveness by introducing uncertainty as to its application and the question: who would have access; who wouldn’t?

Given the potential calls on the firewall from other euro zone countries (Portugal, Spain, and in the worst case, Italy) these doubt are warranted. Should the euro crisis spread, the resources of the enlarged firewall would quickly be exhausted. There would be another round of hastily-called summits and perhaps new commitments that might contain the crisis. Then again, they may not.

Moreover, the design of the ESM and the nature of members’ commitments to it raise additional concerns. Consider Germany’s perspective: its partners in the ESM are also the very countries that are vulnerable to crisis. Surely the concern is that, should the contagion spread, Germany would be the only credit-worthy member capable of backstopping the ESM. Given German aversion to bail-outs, together with long-standing German concerns about central bank financing of government deficits, private investors would be justified in discounting the potential role of the ESM. And as noted above, if the ESM is not viewed as credible, it will not be effective in supporting a “good” outcome.

The design of the ESM underscores the importance of the IMF as a universal institution: a negative terms of trade shock one member is a positive shock to another member. The application of the insurance principle suggests that the Fund should be highly effective as a sharing-risk mechanism. But the Fund can only support members that helping themselves by implementing sound policy frameworks – not subsidize the cost of poor policy choices or failing to build the institutions that are needed to support existing policy frameworks.

So, while I am a strong supporter of the IMF, like Wolfgang Münchau in the Financial Times, I think the euro zone has to “go back to the negotiating table.” The model should be the little Dutch boy that saved his village, not the errant village that failed to make the repairs that were needed.