James A. Haley calls for leadership reminiscent of Churchill's "bulldog-like determination and measured" stance in June of 1940. (AP Photo)

The situation in Europe continues to deteriorate. It may be far too pessimistic (or uncharitable) an assessment, but to channel Churchill (June 1940), it looks increasingly likely that: "the battle of Greece is over; the battle for Spain is about to begin." Historically minded readers will recall that between the fall of Poland and the invasion of France there was a "phony war" of relative inactivity that included half-baked and half-hearted (or disingenuous) attempts to find a peaceful solution to the European conflict.

Those readers know, however, that events moved very quickly indeed in the spring of 1940. In a matter of weeks, France capitulated and England stood alone – albeit with support from Australia, Canada, New Zealand and the rest of her Commonwealth. In those dark days, Churchill rallied the British people with his bulldog-like determination and measured, resolute call: “Let us, therefore, brace ourselves to our duty…” What was the secret of his leadership? Most important, he did not flinch in his assessment of the risks ahead and the travails that the British and their allies faced; by doing so, he mobilized public opinion and conferred political legitimacy to his premiership of a coalition government and his stubborn and pugnacious defiance of Hitler.

In some respects, the past six months or so is reminiscent of the phony war. Late last year, the situation looked very bleak for the euro zone. European financial markets were at risk of freezing up, similar to the Lehman moment in the days and weeks following the Lehman failure in September 2008. Time seemed to be running out. The situation was stabilized by the ECB’s decision to launch the Long-Term Refinancing Operation (LTRO), which provided banks a secure source of funding. By itself, however, this would have proven insufficient. The reason is that creditors were fleeing European banks, which were funded in part with U.S. dollar wholesale deposits. The banks needed U.S. dollars to redeem those funding sources. And, absent a source of dollar liquidity, European banks would have to sell U.S. dollar assets – largely commercial real estate in the U.S. That would have been a terrible “frost” to the green shoots emerging in the U.S.  The Fed provided large swap lines of U.S. dollar liquidity to the ECB to prevent this outcome.

The LTRO and Fed swap lines contributed to a false sense of security, just as the phony war provided time for vacillation and prevarication. That false sense of security appears about to end. The banking crisis in Spain looms large, and threatens to get much worse – the danger is that it quickly spreads to all European banks (the unsavory historical precedent here is the failure of Credit Anstalt in 1931). So, if the phony war is about to end, what is the likelihood that leadership comparable to Churchill’s will emerge to mobilize the political will needed to contain the threat?

Before addressing that question, think about the nature of the challenge facing European leaders in terms of a simple Venn diagram. First, consider the set of policy actions that would be effective in providing an effective backstop to the current instability (say, euro-wide bank support and deposit insurance with effective lender of last resort facilities) and risk-sharing mechanism (euro bonds, or some form of fiscal transfers). Next, think of the set of political feasible actions – measures that, within the euro zone’s institutional and governance arrangements, could be implemented quickly and effectively. Both sets are illustrated in Figure 1. My worry is that there is currently a null set of measures that are both effective and politically effective. The measures that would be effective in containing the crisis are not politically feasible; the measures that are politically feasible would not be effective. In this situation, the prognosis is worrying to say the least.

It is possible, of course, that the imminent threat of crisis mobilizes political will and allows for the “migration” of the set of politically feasible options so that there is a now a range of measures that are both effective and politically feasible. I suspect this is hope on which “risk on” financial market trades are based – “yes, the situation looks bleak, but surely they won’t let the euro fail.” There is something to be said for this view. I think that if the majority of those who stubbornly resist any proposals to “bail out” spendthrift members of the periphery were confronted with the consequences of a euro collapse (a steep appreciation of newly-reintroduced national currencies, unenforceable claims on former euro zone partners, etc.) they might see that their interests are not so insulated from their less fortunate partners. This scenario is depicted in Figure 2. 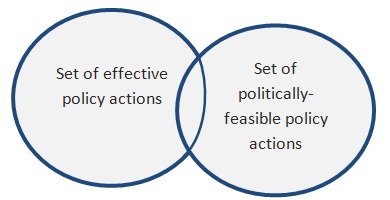 But this hopeful perspective doesn’t rule out the possibility that measures judged “effective” today could lose potency the longer the delay in implementation. In other words, while the set of politically-feasible actions might shift to the left in a crisis, the set of measures that would prove effective might also shift to the left. In some sense, this has been the history of past European efforts. The euro partners have done what has been necessary to create a temporary patina of stability; not grasped the nettle and implemented the measures needed to get ahead of the crisis and resolve the uncertainty that is fueling a destructive cycle of austerity, lower growth, higher unemployment and eroding confidence.

To break that cycle requires true leadership. President Obama, undoubtedly frustrated by the implications of continued volatility on his re-election campaign, has called on Europe to act decisively. It would be fair to guess that considerable pressure is being brought to bear on Berlin. In this regard, I am sympathetic to Chancellor Merkel. She has a dreadful choice to make: she can either allow Germany to take the blame for the failure of the European Monetary Union project, incurring the wrath of much of Europe; or she could agree to help finance the balance of payments problems that lies at the heart of euro zone’s current malaise, thereby incurring the wrath of many Germans and imperiling her future electoral prospects. It would take Churchill-like oratory and determination to mobilize public opinion to preserve the euro. It would not be easy; it would not be sure thing.

And, yet, this is the dilemma.

Even if Chancellor Merkel decides to “save the euro” the kind of institutional arrangements for the governance of the euro zone cannot be enacted overnight. It would be foolish to think otherwise. As noted in previous posts (here and here, for example), this is the underlying governance failure of the euro zone. Unfortunately, in these circumstances, the best that we can hope for is more stop-gap measures that prevent another Lehman-like moment and which buys the time necessary to erect the governance architecture needed to support a single European currency. But the one without the other is just a recipe for more of the instability that is holding back recovery and retarding global prospects in the New Age of Uncertainty.