The European Central Bank and the Liquidity Tsunami

The honeymoon — if there ever was one — for the European Central Bank’s (ECB) President Mario Draghi is clearly over. After receiving support from politicians for his role in twice reducing the ECB’s policy rate, there is a now a groundswell of criticism directed at the ECB’s so-called Long-Term Refinancing Operation (LTRO), in part because the term of such loans has been extended to three years from the original 3 month term they were designed for.

While bankers and financial markets breathed a sigh of relief, other central bankers are becoming worried that the ECB has used a back door operation to bail out the financial sector. More worryingly, the ECB is viewed as having found an end run around the restriction imposed by the Maastricht Treaty which explicitly prevents the ECB from acting as a lender of last resort.

But what is a central bank to do? The euro zone economy is flirting with another recession, and government austerity programs are beginning to take hold with Germany, in particular, insisting that this is the only way to restore the credibility of the single currency regime and economic health. Policy makers in the euro zone and elsewhere should be mindful that the need for monetary and fiscal policy to act in concert is especially important when the powerful forces of private sector deleveraging combine with a rise in public sector debt.

This is one of the lessons I drew from the recent report by McKinsey & Co. Debt and Deleveraging: Uneven Progress on the Path to Growth. For monetary policy this implies that the ECB has no choice but to engage in a version of quantitative easing, now universally referred to as QE. As the chart below illustrates, broad money growth, measured on the vertical axes, collapsed beginning in 2008 and remains well below growth rates attained prior to the global financial crisis. Just as excessive growth in liquidity (an even broader measure of ‘money’) contributed to the boom that led to the subsequent bust (again see the rapid growth in broad money in the chart below from the mid-2000s until the eve of the financial crisis) so is a collapse in money growth slowing any incipient recovery in the euro zone. 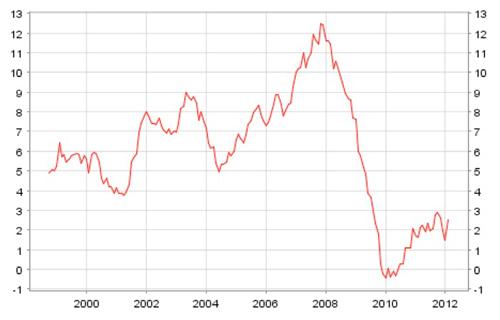 Nevertheless, all is not well with the ECB’s intervention. It is no wonder that banks are relieved at their ability to borrow cheaply (i.e., at 1%) and then reinvest the proceeds into relatively higher yielding financial assets. Typically, banks will want to hold government bonds as these are considered to be far less risky than commercial loans, and are among the most liquid of assets. Moreover, by holding sovereign bonds, banks are assured of having high quality assets on their balance sheets which serve them well if they wish to raise additional funds in the financial market place or demonstrate their soundness to regulators.

Is this a bad thing? First, and perhaps foremost, there is the uneasy feeling that monetary policy is being asked to do too much as well as overstepping the bounds of its authority. As Hervé Hannoun, Deputy General Manager of the BIS, pointed out in a recent speech: “There is a need to forge a new consensus that fully recognizes the inherent limits of monetary policy. The “new frontier” of monetary policy is, in some sense, an old one. It is to delineate the boundary of monetary policy and to clarify what its limits are.”

Directly or indirectly, the ECB is doing the dirty work that politicians are unwilling or unable to do. As the chart below vividly illustrates the accumulated impact of various bail-out and other programs meant to shore up the weaker euro zone members, as well as the counter-cyclical response of fiscal policy, has led the debt to GDP ratio (measured on the vertical axis) to soar since 2008 (note, however, that the chart exaggerates somewhat the rise in debt since the vertical axis starts at around 65%). 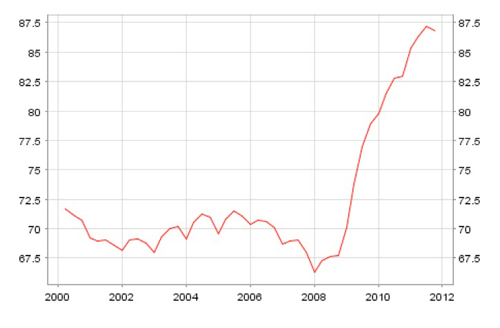 This puts pressure on the ECB to ensure that monetary policy is as loose as it can be in an attempt to help the single currency bloc escape the worst of a recession which many analysts, including the ECB, expect to affect the euro area in 2012. Even if the ECB is ultimately successful, the timing and manner of its exit from unconventional policies may be a determining factor in the survival of the euro zone.

Nevertheless, the ECB’s subterfuge, not terribly well concealed, risks turning Europe’s banks into zombies: addicted to the cheap loans and the relatively safe returns of sovereign bonds which combine to produce a steady stream of profits. Since some of the sovereigns are themselves suspect (in terms of default risk), the central bank’s actions do little to cure the weak balance sheet position of many banks in Europe and risks turning them into the financing arm of governments. It would be far better, as my colleague Paul De Grauwe noted in a recent commentary for the euro zone, to cease pretending that the ECB cannot be like any other central bank and hold member states’ sovereign debt directly on their balance sheets.

Recent events are hardly encouraging for those who hope that policy makers in Europe have come to grips with the realities of the current financial situation. Perhaps just as importantly, steps taken in recent months reveal the weakness of policy makers’ approach to the multitude of economic problems afflicting the euro zone.

The single-minded focus on implementing a flawed set of fiscal rules[1], known as the ‘fiscal compact’, while ignoring the need to promote growth and use the opportunity to implement a series of structural reforms (e.g., in labour markets), is placing the ECB in an increasingly uncomfortable position. At least President Draghi should take comfort from the fact that the wagons are circling around other central bankers too, notably Ben Bernanke, Chair of the US Federal Reserves’ FOMC, and Mervyn King, Governor of the Bank of England, both of whom are increasingly subject to criticism for their respective central banks’ actions.

[1] One element of the fiscal compact requires euro zone members to continue to aim for a 60% debt to GDP ratio. The chart above makes one wonder whether this is a feasible goal or, rather, how long this will take.