On European Tour, Trudeau Steps Out of Trump's Shadow

Obvious bond with Merkel contrasts with workmanlike visit to Washington

Canadian Prime Minister Justin Trudeau’s weakness for grandiloquence can get the better of him.

“Make no mistake, at the end of the day, Canada and the US will always remain each other’s most essential partner,” Trudeau said during his day trip to Washington on February 13 to meet the new president and congressional leaders.

You would struggle to find anyone in Washington who would describe the Canada-US relationship in such a way. The United States categorizes the rest of the world as friends and allies, rivals and enemies — but rarely as partners, never mind essential ones. That would imply equivalency, and there is room for only one beacon on the hill. By grasping, Trudeau weakened what was otherwise a good showing in his first face-to-face encounter with the enemies of his world view.

But at other times, Canada’s poetic leader nails it.

On February 16, he became the first Canadian prime minister to address the European Parliament. A day earlier, the body passed the Comprehensive Economic and Trade Agreement (CETA) between Canada and the European Union. The sight of hundreds of European politicians embracing free trade in the aftermath of Brexit and Donald Trump’s ascent to the White House, and ahead of elections in France, Germany and the Netherlands, deserved the sort of rhetorical flourish that Trudeau adores. He didn’t disappoint.

“It’s harder to work to build than it is to tear things down,” Trudeau told the assembly in Strasbourg, France. “With CETA, together we have built something, something important, especially at this moment on your continent and mine.” He continued: “Now we need to make it work for your people and mine. If we are successful, CETA will become the blueprint for all ambitious future trade deals. If we are not, this could well be one of the last.”

Joe Biden surely would be pleased. The former US vice president visited Ottawa near the end of Barack Obama’s presidency and urged Trudeau to defend the “liberal economic order” from the protectionist fever taking hold in so many of the world’s main economies. It was unclear for a time whether Trudeau wanted the job. The focus of his government since November 9 has been almost entirely on Washington.

There has been talk of cutting a deal with the Trump White House on trade and leaving Mexico to fend for itself when the new president makes good on his promise to overhaul the North American Free Trade Agreement (NAFTA). It looked at times like a “Little Canada” mentality was taking hold, equating the national interest with placating a vainglorious and unpredictable US president.

Canada may yet look out for number one when it comes to NAFTA. The Globe and Mail reported that Trudeau and Trump intend to engage in bilateral trade negotiations. But Trudeau’s decision to lend his star power to the European Parliament’s passage of CETA suggests Canada’s prime minister may see a larger role for himself in global affairs. He left for Europe only days after his first meeting with Trump, inviting renewed discussion of his “sunny ways” as a foil for the anger-fuelled populism that triumphed in the United Kingdom and the United States in 2016.

Indeed, one German newspaper heralded the arrival of the “anti-Trump.” Trudeau followed his speech at the European Parliament with meetings in Berlin with German Chancellor Angela Merkel, the other world leader that Biden said could help save globalism from the nationalist uprising. A softly lit dinner inspired a predictable gushing on social media about Trudeau. More sober observers will contrast the intimacy of Trudeau’s interaction with Merkel with his workmanlike visit to Washington. It is clear where the Canadian leader’s heart is, and globalists should be encouraged that he is unafraid to show it.

Richard Haass, president of the Council on Foreign Relations, said in an interview on Canadian radio that the Trump presidency may force Canada to step out of the shadow of its American cousin when it comes to global affairs. Trudeau did that this week.

In Strasbourg, France, Trudeau continued to separate himself from the White House, declaring that the “whole world benefits from a strong EU,” a contrast to the Trump administration’s disdainful view of Europe. Standing with Merkel at a press conference a few days later in Berlin, Trudeau also rejected the US demand that Canada spend more money on defence to satisfy its commitments to NATO. “There are many ways of evaluating one’s contribution to NATO,” Trudeau said.

The comment on NATO won’t be as universally praised as his defence of international trade at the European Parliament. Merkel said Germany intends to boost military spending to meet its NATO obligation, suggesting the two champions of globalism won’t always agree. Still, Trudeau showed this week that when he said after his election victory in 2015 that “Canada is back” as an international player, he meant it. He will have to back his high-minded speeches with actual policy, something he has done fairly effectively to date.

Biden might have been right: the globalists may have their champion.

Making the Most of CETA: A Complete and Effective Implementation Is Key to Realizing the Agreement’s Full Potential 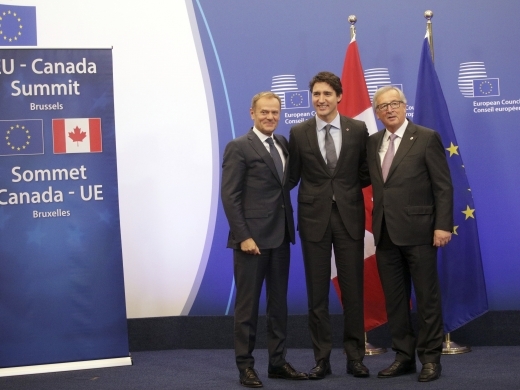 Trade
A Transatlantic Perspective on CETA 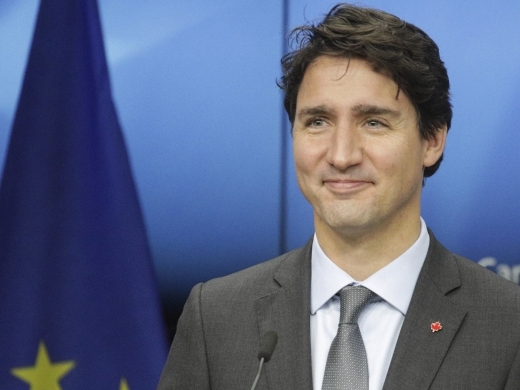 Trade
We Need a Trade Pact for All North Atlantic Countries