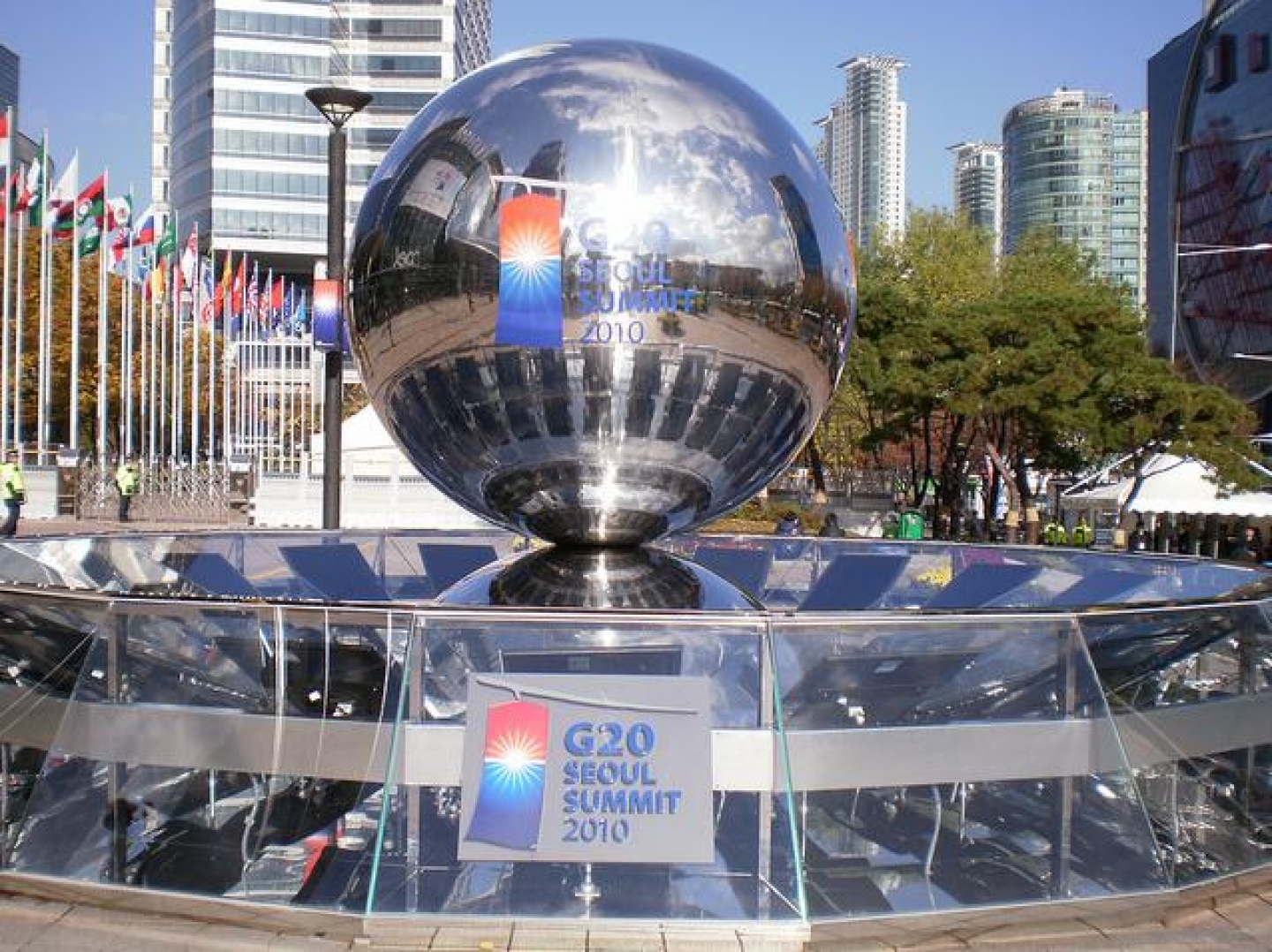 The week before the Seoul G20 Summit was a historically unprecedented week of policy debate on international economic issues. Whether it was push back from China on Tim Geithner’s idea of numerical targets for external deficits and surpluses or criticism of the Federal Reserve’s new stimulus of quantitative easing (known as QE 2) or Robert Zoellick throwing the idea of a return to the gold standard on the table or Alan Greenspan accusing the US of “pursuing a policy of currency weakening” followed by Geithner’s response that the US would “never” do such a thing, this was the “week that was.”  The conflicts, divides and frictions in policy perspectives that characterize the new global economy of the twenty-first century were exposed for the entire world to see.

Is that what is really happening?  Or is the new force field of a structurally different global order yielding new dynamics of summitry and international economic policy making?

The professional journalists are, rightly, holding the summiteers’ feet to the fire to ensure that what officials say they are doing matches what they are doing or what is actually going on. For journalists, G20 summits should create breakthroughs in policy deadlocks and achieve results in the real economy and cooperative outcomes.

The “think tankers,” on the other hand, are more focused on the process over time, rather than on specific peak moments at given points in time, such as summits. For experts and researchers, the gradual evolution of the global economy and its structural change over time, as ministers of finance, central bank presidents, G20 deputies, Sherpas and others meet in various venues with considerable frequency during the year, are at least as important as the summits themselves. Policy results remain important, but are seen as being generated by continuous, sequential efforts, rather than breakthrough moments alone.

What happened in Seoul seems to prove that, although both of these groups have a grasp on some aspect of the truth, neither group fully comprehends the new reality of the G20.

The Seoul summit leaders’ declaration does not contain  major, new breakthroughs, especially on the much-debated issues of macroeconomic policy management in surplus and deficit countries, on exchange rates or on policy coordination.  The journalists would, therefore, seem to be right.

On the other hand, the Seoul declaration does contain firm language that reflects the intense debate of the last few weeks and clearly provides coded language suggesting that the G20 process will continue to work on these issues, make progress on them, scrutinize deficit and surplus country behaviour, urge specific policy adjustments, assure the policy divergence does not lead to economic disruption, hold each others’ feet to the fire and move gradually toward “strong, sustainable and balanced growth.”  So, a careful reading would seem to say that the think tankers are right.

Both camps are partially right, but both are looking too narrowly at what is going on. The policy debate prior to the Seoul G20 Summit was historic for the breadth of issues, the intensity of the debate and the degree to which it involved other actors, leaders, relevant publics and society at large.  The linkage between international economic policies and domestic interests and politics was laid bare.

Jobs are the key: China does not want to appreciate its exchange rate because it will dampen job growth in crucial export industries; the US needs to pressure other countries to continue growing in order that trade patterns can rebalance and diversify away from the US–China deficit-surplus imbalances; Germany, always focused on price stability and competitiveness, has historically resisted pressures to engage in expansionary growth policies that could spill over into inflation and trade deficits; and the UK has come up against a wall on its budget deficit and national debt.

What used to be the arcane world of economic jargon and technicalities has now become the public discourse on economic restructuring in the global age. The steerage of the new global economy has ceased to be the exclusive work of central bankers, finance ministers and economists behind closed doors, but has become the public’s business in which the public’s interests are paramount. That was certainly the lesson of the recent American election.

Policy has become politicized, just as politics have become polarized. Behind the international economic policy debate lie public anxieties about jobs, incomes, pensions and mortgages. The limits of economic cooperation for its own sake are the combination of the evident pain of economic hurt and the hopes and aspirations of people everywhere. There is now an inextricable link between domestic political concerns and international economic policies, which in earlier eras could have been treated as technical issues.

The run-up in the weeks before G20 Summits  turn out to reveal the crucial role of the political dimensions of summits, because it is then that the policy debates connect with the public interest in policy outcomes. No longer excluded from summits, publics are now the pivots of summit policy debates.  After an intense policy debate in the public arena, there is no doubt where governments stand and why they take the positions they do, and why they resist changing their policies.

These policy differences based on different public interests are what policy makers need to know when they work together to align policies in relation to the global economy. These are the constraints they need to be aware of when they work to prevent spillover effects, policy shocks, discontinuities and adverse impacts deriving from a lack of consistency and complementary  economic policies among major economies.

The policy debates before G20 summits connect the public interest to the policy process.  That is a good thing, but it makes things messier.

An observer of policy looking for fresh decisions on economic policy coordination at G20 summits will be disappointed as the run-up to the summits is precisely when policy and political differences reveal themselves most starkly, rather than when the possibilities for reconciliation and resolution manifest themselves. That happens later, when the public focus marshalled by the glare of publicity dissipates and G20 deputies, Sherpas and others get back to work trying to push forward a common and concerted, consistent and complementary set of policies and institutional innovations that the global economy requires. They are better able to accomplish this because both the constraints of domestic interests and the imperatives of global forces are clearer as a result of the intense public policy debate that has just taken place.

The mechanism generating these new dynamics of summitry is the larger, more diverse and more inclusive G20 summit process that embraces and reflects the reality of the new global economy, the various national perspectives, the immediacy of the policy debates for addressing public anxieties and the imperatives for G20 governments to take responsibility for global outcomes which affect publics everywhere. The new mechanism in the international arena is a mirror of the essential realities of the new global order, requiring us to use wider lenses and new prisms to fully understand the complex dynamics it is generating.

At future summits, leaders must get better at narrowing the range and lowering the intensity of the policy debates before them, increasing the feasibility of orchestrating significant summit agreements. Preserving a tolerance for differences and conflicting policy ideas seems to be a vital, new dynamic of G20 summitry, enabling leaders to connect with and reflect the immediate concerns of their publics.