Global Banking, Collateral and Risks to the Financial Plumbing, Part I

A month or more ago, I attended a fascinating seminar at the Brookings Institution on the role of collateral in the global financial system. The highlight was a presentation by Manmohan Singh, who, in a series of IMF working papers, and a recently-published book, has mapped out the "plumbing" of the modern financial system; that is to say, the financial flows in the age of shadow banks and highly integrated global financial markets.

Anyone living through the past decade knows that the modern financial system is incredibly efficient. (For the avoidance of doubt, by "efficient" I refer simply to the fact that before the global financial crisis a dollar of capital was used to support a much, much larger volume of credit; not to the purpose to which those loans were put.) The downside, of course, is that the system was also rather fragile. The closure of a couple of investment funds heavily invested in sub-prime mortgage-backed securities in the summer of 2007 very nearly brought the system down, with repercussions that radiated throughout the global financial system with enormous financial, economic and social costs. The global economy is still recovering from the effects of the crisis.

In early 2008, the metaphor that I used to describe the system was an inverted pyramid. Visualize a small triangle at the base on which a much larger trapezoid rests. The small triangle is the capital base of a large international bank; the trapezoid is the assets generated by the banks. Now, capital is held to insulate the bank (and ultimately depositors and creditors) against unexpected changes in the value of those assets. And, in the halcyon days of banking, with a sufficiently well-diversified asset portfolio, not all assets would be expected to decline in value simultaneously. As a result, the triangle base of the inverted pyramid was much smaller than the volume of the trapezoid. 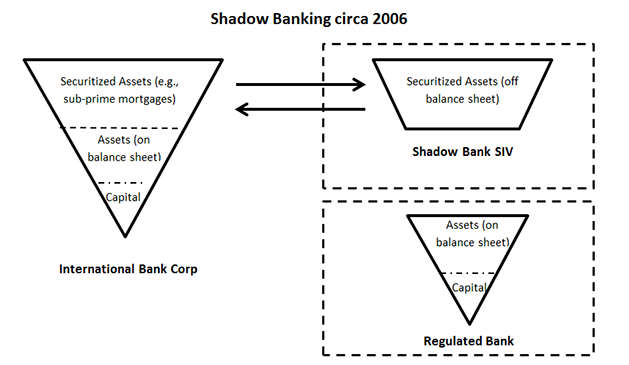 The ratio of assets to capital is a measure of leverage; in the pre-crisis period, the leverage ratios of some large international banks were very high indeed. The analogy to an inverted triangle, precariously balancing on its tip, was apt. In the brave new world of globalization finance circa, say, 2006, the size of the trapezoid grew and the relative size of the capital triangle shrank. The inverted pyramid of the modern "efficient" banking system became increasingly unstable. But the true extent of the fragility of the system was masked by the use of shadow banks — structured investment vehicles (SIVs) established, frequently under offshore jurisdictions. This process was facilitated by securitization —the packaging of a large number of individual loans (the ubiquitous 'sub-prime’ mortgage) into a portfolio, the income from which was used to support bond issues, the upper tranches of which credit agencies rated favourably based on assumed independent default rates on the individual mortgages in the portfolio and the capital buffers supporting the upper credit tranches.

Shadow banks facilitated regulatory arbitrage, as the larger trapezoid on the top of the inverted pyramid was transferred off the books of the large international commercial bank leaving the ratio of capital to assets on the balance sheet of the regulated bank at a more modest and reasonable level. The effect of securitization and moving assets into SIVs is illustrated in the right-hand side of the diagram above, where the operations of “International Bank Corp” are divided between the regulated bank subject to home country regulations and the offshore shadow bank SIV.

This process of regulatory arbitrage allowed the banks to meet their home country regulatory requirements while using their capital to generate a much larger pool of assets. Capital was conserved, while the banks originating the assets earned fees when the assets were securitized and the bankers behind the deals benefited from those big bonuses that later drew the ire of Wall Street protesters. When those relatively inconsequential investment funds closed in the summer of 2007, however, banks were suddenly faced with a simultaneous cascade of declining asset values that threatened their survival. In this environment, banks suddenly found that they couldn't transact with each other — each feared that the other might fail, leaving them without a seat in the frantic game of musical chairs. The banking system seized up and with it, so too the global economy.

All was well and good until the summer of 2007 when those relatively small funds closed. Then the larger trapezoid that had been off balance sheet moved back on, as banks realized that they faced reputation risks if the bonds which they created through their SIVs went into default. This is what I referred to at the time as the "trapezoid of doom." This process is shown by the larger trapezoid that moves off the bank's balance sheet in the diagram above, only to return. Suddenly, the ratio between capital and assets on the left-hand side of the diagram above didn't look quite so reasonable, and because the opacity of the underlying assets made them difficult to evaluate, banks were loath to take on exposure to other banks. The problem was that the potential write downs from these assets exceeded the capital base. Moreover, as banks scrambled to save themselves, they hoarded safe assets (US Treasuries) and avoided exposure to other banks. This was the moment when global bankers peered into the abyss.

This highly stylized story (which hopefully isn't too inaccurate) explains what happened. It does not address the "how" question. Specifically, how was it that banks were able to generate so many assets —the trapezoid of doom? That is where collateral comes in. The next installment discusses that question and three related issues that came up in the Brookings seminar regarding the extraordinary increase in excess reserves in the global banking system, the impact of collateral hoarding and the effect of monetary tightening, and, finally, what are the likely effects of global regulations on the hypothecation of collateral.