Three years ago, I launched this blog with a post, Why the New Age of Uncertainty, which outlined the challenges confronting the global economy:

We live in “interesting” times. The global economy confronts a range of challenges — from high public debt burdens in many advanced economies struggling with the legacy of financial excesses, failed banking systems and diminished expectations for long-term growth, to fears of a possible return of high inflation, and a threatened collapse of the US dollar that would result in fundamental changes to the international monetary system. At the same time, confidence in the usefulness of economic theory to guide policy and sustain the steady increase in prosperity enjoyed by successive generations has collapsed.

Our interesting times are, therefore, also a new age of uncertainty.

The underlying philosophy of this blog is simple: while the global economy does indeed face enormous obstacles to growth, these challenges need not lead inevitably to the nightmarish scenarios foretold by some. Better policies, informed by a vigorous debate and built on strong empirical foundations, can transform the new age of uncertainty into a new golden age of global growth that will serve as the wellspring of prosperity for countless millions around the globe.

Three years on, IMF Managing Director Christine Lagarde describes the outlook for global growth as the “new mediocre.” Larry Summers, meanwhile, warns of secular stagnation. And, while scholars debate the validity of the secular stagnation hypothesis, it is pretty hard to deny that the current recovery is the worst on record in the post-war period. 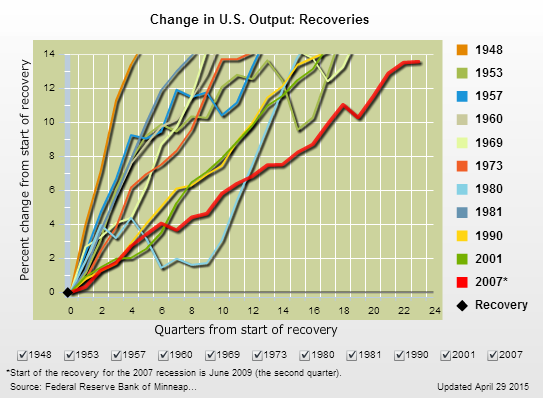 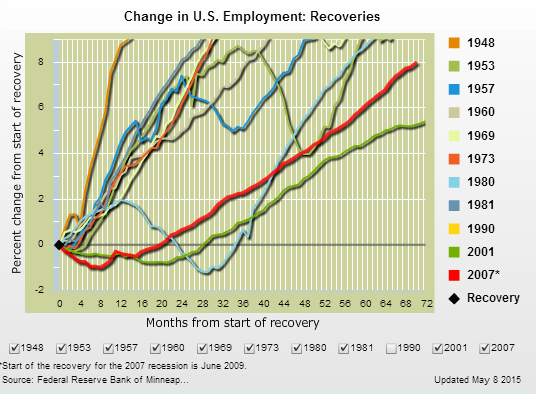 Moreover, despite encouraging labour market outcomes, recent indicators suggest a pull-back of US growth. Similarly, while the Eurozone sees the green shoots of recovery, it grapples with the uncertainty of Grexit and what that might entail.

Observers of the global economy can be excused, therefore, if they suffer from a “waiting for Godot” syndrome.

It wasn't supposed to be this way. Didn't we learn from the mistakes of the 1930s? And didn't we do extraordinary things to avoid a repetition of the 1930s?

Well, yes and no.

As argued here three years ago, the extraordinary policy responses to the global financial crisis could be viewed as a refutation of Hegel, who famously asserted: “we learn from history that we do not learn from history.” In the midst of the crisis, governments did not repeat the mistakes of the Great Depression. Fiscal policy did not turn pro-cyclical. Monetary authorities around the globe cut policy interest rates to near zero and injected liquidity through a variety of new instruments, introducing a myriad of new acronyms to the lexicon of central banking. And governments largely refrained from protectionist trade measures in an effort to beggar-thy-neighbour. As a result of these extraordinary actions, the second Great Depression that many feared in late 2008 did not materialize.

But we are still waiting for Godot. The question is, why? The blogosphere is filled with possible explanations. It might be, for example, that fiscal policy responses were too timid — rather than overly expansive — or prematurely curtailed by concerns of sustainability or political considerations. Monetary policy, meanwhile, ran up against the zero lower bound and the liquidity trap pathology, which prior to the Japanese experience with deflation had been regarded as a theoretical curiosum confined to textbooks.

Part of the problem may be that, with inflation very low and pervasive uncertainty about the future, even very low nominal rates may be too high to stimulate investment. Firms exercising the option value of waiting hold off investing until depreciation of their existing capital stock leave them with no alternate. And, make no mistake — investment in the advanced economies has been pretty weak. The chart below for the United States is probably the most dramatic, but the pattern is similar for most other advanced economies (Canada being an outlier, likely because formerly high oil prices led to a rebound in investment spending after the crisis). Investment as a share of GDP collapsed from roughly 20 percent to about 12½ percent and after seven years has struggled to return to its long-run average of about 17 percent. Remember, this is gross investment; a large share is presumably simply offsetting the effects of depreciation on existing capital rather than augmenting the capital stock. Firms are sitting on cash or repurchasing equity, raising earnings per share. To get a measure of the extent of this phenomenon, type in “corporate share repurchase” into Google and you will get about 43,500 hits in half a second. 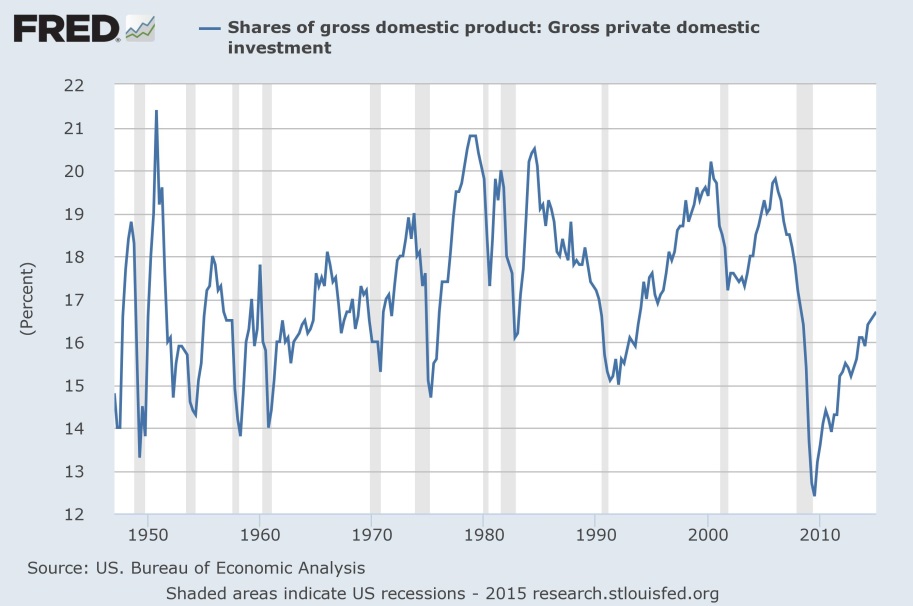 In any event, with monetary policy struggling to raise inflation to central bank inflation targets, and fiscal policy stimulus insufficient to offset the effect of lower investment, output gaps — or the difference between the economy’s potential output and actual output — remain open. In this environment, inflation is not a problem; indeed, the concern is continued disinflation and, with the collapse of oil prices, the threat of deflation.

With firms holding cash or repurchasing shares rather than invest, and inflation quiescent, “cash is king.” But cash is bulky, so the substitute is government debt. And as global investors wait for Godot they have piled into US Treasuries, Swiss Government bonds and German Bunds: 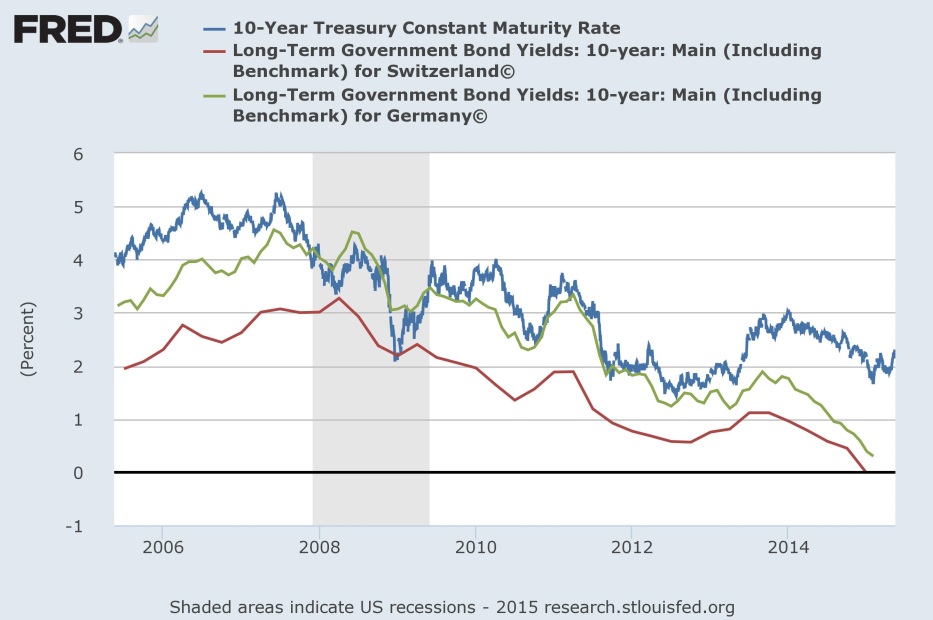 The issue that is being debated in the blogosphere is whether these historically low interest rates reflect too much savings or too little investment. This is an important and interesting debate that will eventually be resolved. In the meantime, those low interest rates are a sign of post-crisis pathologies that are creating the waiting for Godot global economy in the New Age of Uncertainty.