The eurozone continues to struggle with the financial crisis on several fronts. A good indicator of the rise and fall of citizens’ confidence in the attempts by the authorities to prevent the single currency from collapsing comes from asking where they place their deposits.

The Bank of International Settlements (BIS) makes available useful banking statistics. It is interesting to examine the evolution of deposits in the financial system in Germany, Greece, Spain, Italy, and Portugal since the crisis erupted in the second quarter of 2010. The data are in millions of dollars (converting it to euro would not change the picture since all the countries use the same currency). 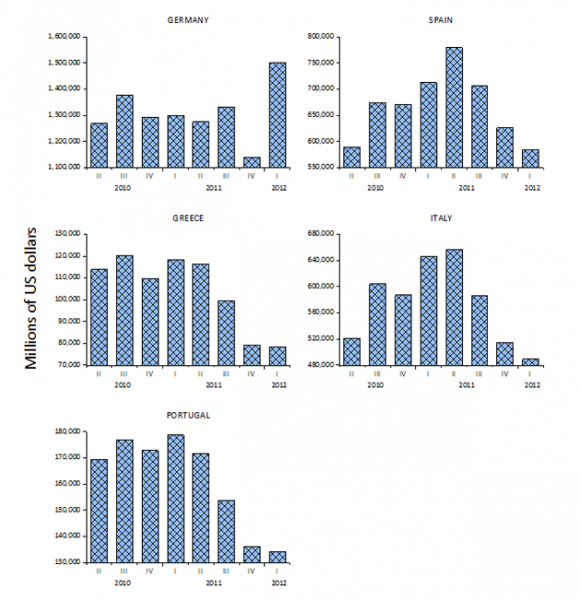 We see the rather precipitous drop in deposits in all the countries shown at the expense, we presume, of Germany. The rapid decline—while somewhat exaggerated because of the (linear) scaling employed—is, nevertheless, unmistakable.

Even if we ‘normalize’ the data—by subtracting the average level of deposits in each country and dividing by the variation over time (i.e., the standard deviation)—the picture of the ‘great sucking sound’ of funds flowing from the Southern periphery to Germany (and, possibly, elsewhere) is clear.  As shown below, there is an acceleration, of sorts, in finds flowing out of the periphery and presumably into German banks (particularly noticeable in 2012 Q1). It will be interesting to see what the data reveal in Q2 and, depending on the measures taken by the ECB this Fall, in Q3 and Q4. 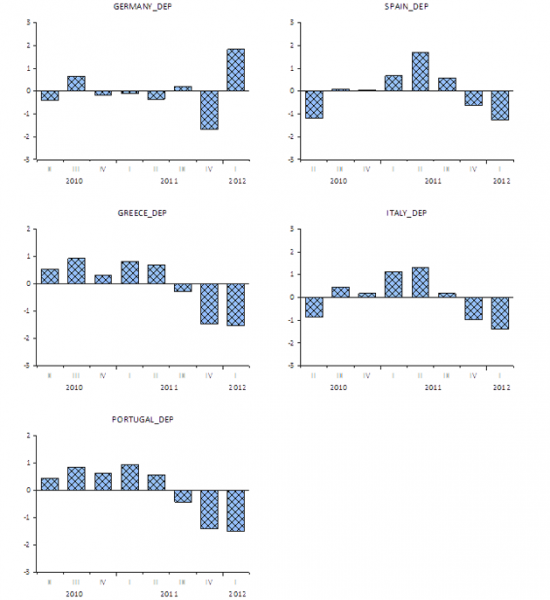