A House of Cards

An earlier post, here, discussed the current situation in the Eurozone and the 1930s-like economic malaise that is contributing to a polarization of politics. Across the Atlantic, meanwhile, at the core of the global economy, the economic outlook is improving but there is no denying that fiscal tightening (through sequestration) led to a much slower pace of growth in 2013 than would otherwise have been the case. Here, too, there are troubling similarities to the 1930s, when premature fiscal tightening in 1937 pushed unemployment back to 20 per cent.

What accounts for this fiscal fiasco?

One possibility is a status quo bias.[1] The authorities may recognize the need for a change of policies, but because the (political and economic) costs of adopting the necessary measures are known, while the beneficiaries are less certain, they stick with the status quo however sub-optimal it may be. Perhaps, one way of thinking about this effect is in terms of the perceived over-arching need to preserve credibility; policymakers may know that the status quo isn't good, but they are reluctant to take on the accepted wisdom. As Paul Krugman might say, they are stuck in a timidity trap.

Another explanation is destructive political gaming, in which political factions maneuver to promote their parties for electoral success. An opposition party could, for example, block the adoption of appropriate policy responses, hoping to saddle the governing party with the blame for the stagnating economy and increasing the electoral returns at the next election.

Such cynical gaming is more likely in highly polarized societies. Unfortunately, that seems to describe the evolution of U.S. politics over the last several years. (And viewers of "House of Cards" would find it all too easy to contemplate.) Consider the fiscal brinkmanship over the debt ceiling 18 months ago and again just eight months ago. While some might argue that these episodes were principled attempts to block policies "bankrupting" the nation, to say the least, that claim is difficult to sustain.

But what has made such gaming possible?

One explanation is an increasingly fragmented political system that responds to the views of the fringes, rather than the broad middle ground. In this regard, it has been argued, here, that a marked increase in the degree of irregularity of Congressional Districts over the past several decades reflects the progressive effects of gerrymandering. This view is supported in the charts below, which show an increase in the degree of gerrymandering in most states. However, where there are independent, non-partisan commissions to review Congressional districting, such as New York, the degree of gerrymandering has actually fallen. 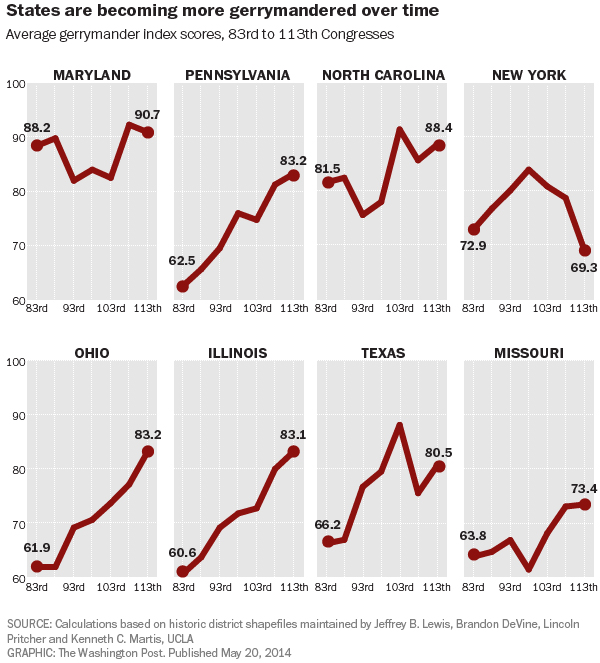 “Ok,” you ask, “what about the effect on polarization, or gridlock?”

The chart below taken from the recent Brookings Institution study Polarized We Govern? (PDF) shows a steady increase in the frequency of legislative gridlock over the period roughly corresponding to the 83rd to 113th Congresses. (Please refer to the full study for the definition of salient issues subject to gridlock, which some might argued is biased.) 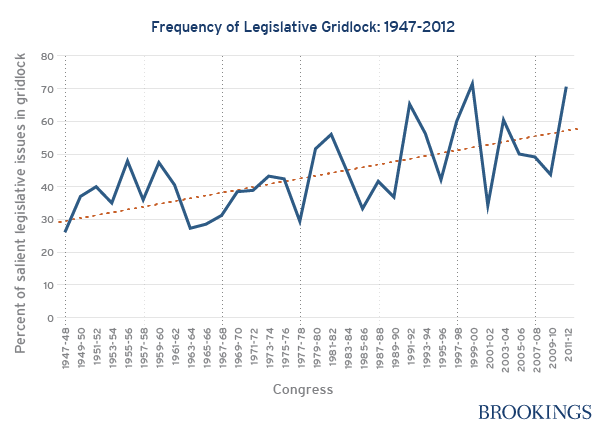 Although the chart depicts a trend line of steadily increasing gridlock over the entire period, it is useful to break this down into two sub-periods. The first, from 1947–48 to 1977–78, includes the halcyon era of post-war global growth as well as the period of economic turbulence and collapse of the Bretton Woods system in the early in 1970s. It also includes Administrations of both parties. If just that sample is considered, it would be difficult to discern a trend; indeed, the two endpoints are roughly the same. The average percentage of salient legislation in gridlock over that period is (by unscientific "eyeballing") about 35%. Now consider the second sub-sample, from 1979–1980 to the present. Casual empiricism suggests that this period displays a clear upward trend of legislative roadblocks, with an average percentage of salient legislation in gridlock of about 50%. (Although it would be interesting to test for a structural “break” in the time series between these two sub-periods, the limited number of observations would likely limit the significance of the test.)

The start of this latter period coincided with the election of Ronald Reagan, who moved into the White House with a clear agenda to roll back the post-war consensus on the role of government. Despite a “Great Communicator” as leader, however, control of the Congress rested with the other party, constraining the legislative ambitions of the reformers.

Did this set in motion the polarization of American politics? Frankly, I don’t know. It clearly does not account for the steady increase in the degree of gerrymandering, which predates the election of Reagan. But it is possible that frustration in the 1980s led to the polarization of politics in the 1990s, when control of Congress was shifting between parties and a “liberal” President occupied the White House. It is interesting to note that the degree of gridlock declined during the Bush presidency in the 2000s and rose again after the 2010 mid-term elections that eliminated Democratic control of Congress, leaving the legislative agenda of another “liberal” President subject to political gridlock.

So, what does this have to do with international financial architecture?

As argued in numerous previous posts, there are huge adjustment challenges in the global economy. Some of these are short term in nature; some longer-term challenges, such as climate change. Regardless, there is a need for an effective international financial architecture to assist the international community to address the challenges ahead. And U.S. leadership is required to get needed reforms to the architecture.

This shouldn’t be a partisan issue. A growing global economy that creates opportunities in a positive-sum game is in the long-term interests of all. In this respect, the costs of global leadership would be higher in the absence of a strengthened architecture. Seventy years ago, the U.S. demonstrated the leadership needed to create the system of international institutions that have promoted international financial stability, development, trade liberalization and collective security. The foundations of that system need to be reinforced. If they are not, the architecture will become a house of cards.