How Trudeau Should Handle Trump

The secret to putting the relationship on the right footing

Justin Trudeau’s first encounter with the US president represents his most consequential meeting to date — quite possibly, the most important meeting of his government’s mandate.

Given Donald Trump's erratic nature, however, the relationship is also fraught with risks for the Canadian prime minister, as both The New York Times and London’s Financial Times have recently noted.

It shouldn't be thus. After all, Canada and the United States enjoy an excellent relationship. Both countries share a common British heritage and many Canadians have roots in the refugees who fled the upheaval of the American Revolution — the conservative-minded “United Empire Loyalists” who preferred to reform the British institutions under which they lived rather than create new republican institutions. Today, many families straddle the border, with members in both countries. In these respects, Canadians and Americans truly are “cousins.” And both countries have enriched the other’s culture — albeit not as equal partners.

These shared historical and cultural ties have been honed by the challenges the two countries have confronted. They fought two world wars together and have participated in UN-sanctioned security interventions in Korea and Afghanistan. Canada was a founding member and supporter of NATO, which, in the words of Lord Ismay, its first Secretary General, was designed to “keep the Russians out [of Europe], the Americans in and the Germans down.” At the same time, Canada shares with the United States responsibility for protecting North America through the joint North American Aerospace Defense Command (NORAD). On September 11, 2001, NORAD swung into action and Canadians came to the aid of Americans potentially “stranded” in flight over the mid-Atlantic and mid-Pacific.

But, beyond the predictable “longest undefended border” and “importance of bilateral trade” talking points that are dutifully repeated at every meeting of the US president and Canadian prime minister, the relationship has not always been smooth. Prime Minister John Diefenbaker clashed with President John F. Kennedy over the deployment of Bomarc nuclear missiles on Canadian soil. Prime Minister Lester Pearson publicly criticized American escalation in Vietnam and, while visiting President Lyndon B. Johnson at Camp David, received a dressing down from his host, who admonished Pearson for having “pissed on his rug.” Moreover, Prime Minister Trudeau’s own father, Pierre Elliott Trudeau, clashed with President Richard Nixon over US tariffs and with President Ronald Reagan over nuclear disarmament.

Notwithstanding occasional bilateral disagreements, given the intersection of their economic and financial interests, Canada and the United States have worked closely together in international fora for the past 70 years. The two partners have not always agreed on every specific issue in multilateral affairs. Yet, in such cases, frictions were communicated as “friends speaking frankly to friends.” In each case, disagreement did not reflect fundamental differences of principle. Both countries shared the same values; both shared the same global perspective.

This perspective reflects the trauma of the Great Depression and global war. The collapse of the global economy in the 1930s led many to view the world as a zero-sum game: country after country raised tariffs and adopted other measures in an attempt to “export” unemployment. But, in the absence of measures to raise domestic demand, these beggar-thy-neighbour policies led to the spread of economic stagnation around the globe and undermined efforts to contain the fascist aggression that resulted in World War II.

The architects of the post-war multilateral architecture, which the United States largely conceived, built and financed, recognized the nexus between international financial and economic stability and collective security. In this respect, the signal achievement of American international economic and foreign policy leadership was to change the way in which people around the world view the global economy and geopolitics: from a zero-sum game, in which one’s gains come at the expense of another, to a positive-sum game that generates benefits for all participants who play by the “rules of the game.”

From time to time, other nations, including Canada, have complained that the rules seem to favour the United States. And it is undeniable that the US dollar enjoys an “exorbitant privilege” to this day — a vestige of the post-war Bretton Woods exchange rate arrangements, which made the dollar the anchor currency for the global economy.

But Canadians understand the benefits that have accrued to them as a result of American leadership. There is no nation more committed to multilateralism. This is why the uncertainty that Mr. Trump has introduced through his initial contacts with world leaders poses a risk to Mr. Trudeau. The radicalism of the White House seemingly threatens the shared perspective on multilateral institutions.

So, how can the prime minister forge a constructive relationship with the president?

First, be helpful. The Trump administration has made infrastructure investment a priority. However, some commentators, such as Paul Krugman, have questioned whether a plan based on tax cuts for private developers will fund projects on the basis of social efficiency, rather than private return. In this regard, the Trudeau government, which has also made infrastructure a priority, is focused on ensuring that its infrastructure spending will generate lasting economic benefits. The prime minister can provide a useful perspective on this issue and offer the assistance of his officials to the administration.

Second, rely on self-interest. Mr. Trump’s political mantra is “standing up for American workers.” The problem is that his talk of tariffs ignores both economics and business realities. Economists agree that tariffs would likely lead to dollar appreciation. The manufacturing jobs “created” by tariffs could be lost as a result of appreciation. At the same time, trade flows today reflect a global production chain; a good may be assembled in a particular country, but from components made around the globe. Restricting imports of inputs could raise costs and cause American exports to fall. Once again, what is gained on the one hand, is lost on the other. It is possible to ignore these effects, of course, but that would put US firms at a disadvantage relative to foreign firms with access the global production chain. Over time, US firms would need the protection of progressively higher tariff barriers. In that case, the question would be: "who lost America's entrepreneurial and innovative advantage?"

Third, defend Canadian interests. Prime Minister Trudeau should not hesitate to point out that, while Canada is a staunch ally and close friend of the United States, it has its own interests to defend. And, as the smaller partner in the Canada-US relationship, Canada suffers from a disadvantage in negotiations. That differential in bargaining power is why multilateral institutions and clear “rules of the international game” are so important to Ottawa. As a negotiator, Mr. Trump can understand and respect that perspective. Beyond that, however, multilateral institutions can also benefit the biggest players by preserving the security and stability from which they, too, benefit.

Mr. Trudeau’s father once described the Canada-US bilateral relationship in terms of sleeping with an elephant: no matter how good-natured the beast, every twitch was potentially life-threatening. If the prime minister were to convince the president that international arrangements are worth preserving, he could mitigate the risks to his government and to international cooperation. He would also calm the beast.

Mr. Trudeau’s father once described the Canada-US bilateral relationship in terms of sleeping with an elephant: no matter how good-natured the beast, every twitch was potentially life-threatening.
The opinions expressed in this article/multimedia are those of the author(s) and do not necessarily reflect the views of CIGI or its Board of Directors. 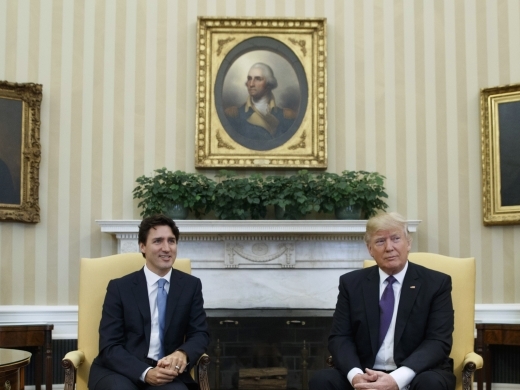