International banking and the decline of trust

The Sea of Faith
Was once, too, at the full, and round earth's shore
Lay like the folds of a bright girdle furled.
But now I only hear
Its melancholy, long, withdrawing roar,
Retreating, to the breath
Of the night-wind, down the vast edges drear
And naked shingles of the world.

Matthew Arnold is my favourite Victorian poet. And Dover Beach, while somewhat melancholic, is my favourite Arnold poem. The stanza above came to mind reading a recent edition of an ever-thoughtful friend's proprietary newsletter (hat tip: JA), which points to Bank for International Settlements (BIS) data on inter-bank activity following the onset of financial “troubles” in March 2008. The charts (at bottom) map the steep decline in inter-bank activity (note that these graphs are cumulative changes and the scale is trillions of US dollars). I find it remarkable that, five years after the onset of the crisis, inter-bank activity is down $5 trillion from its pre-crisis level. Is it any wonder that economic recovery in Europe (refer to the third graph on the right) has proven so elusive? As my friend might say, if the financial “plumbing” backs up, malodorous events happen.

Arnold’s poem is a reflection on the loss of religious certainties in an increasingly scientific age. It is a useful counterpoint for a discussion of international banking because inter-bank lending is all about faith — the trust that one bank has in the other banks with which it deals. And when that faith is lost, as it most assuredly was in the panicked days following the Lehman failure, inter-bank transactions collapse. But because banking is, fundamentally, about trust, banking relationships will not be restored overnight — it takes time to restore trust in one’s counterparties. It will not be restored by attempts to minimize the extent of problems.

Go back several years, to those dark days following the Lehman failure and the near-total paralysis that gripped the U.S. financial system. In just a matter of days banks suddenly realized that they might not be insulated from the opaque assets they were holding, the value of which they could not assess. And because they could not price the value of assets on their own balance sheets, they realized that they could not be sure of what other banks were holding. In this environment, bank officers with fiduciary obligations to shareholders and depositors were loath to take on risks they could not assess by lending to other banks, even for the very shortest maturity. But, with interbank lending frozen, the rest of the financial system seized up as well and credit to businesses contracted.

In this environment, resuscitating inter-bank lending was a priority. U.S. Treasury Secretary Tim Geithner sought to restore trust by forcing banks to subject themselves to a rigorous system of stress tests. This regimen would not have the desired impact, however, if the result of the exercise was a growing wave of bank failures. Stress tests were supported, therefore, by resources to recapitalize banks that were found to be insufficiently capitalized. It is important to note that this was not a voluntary operation—banks were not given the option of opting out. If a healthy bank were permitted to avoid the process, less sound institutions might likewise beg exclusion for competitive reasons and hope that their fortunes improve in a gamble for redemption.

It is difficult to overstate the importance of this process. Given the nature of the troubled — or “toxic” — assets in bank balance sheets, particularly the difficulties associated with valuing assets, banks viewed other banks with suspicion. This is an example of a so-called “pooling” equilibrium in which, owing to information asymmetries, goods (or assets, as the case may be) of varying quality are considered inferior regardless of their intrinsic value. The quintessential example of this phenomenon is the case of used cars.[1] Because some cars are “lemons,” unless you are an expert mechanic, buying a used car entails a risk; wary buyers have an incentive, therefore, to treat all used cars as suspect and to offer a commensurate price. But if all used cars are priced as “lemons,” the owners of good used cars will not put them on the market — finding family and friends who trust their assurances of quality. As a result, the average quality of cars on the market falls as the market becomes dominated by “lemons,” validating the low prices offered by prospective buyers.

What the stress testing did was to provide credible assurances that banks that passed the tests were adequately capitalized, reducing the risk of taking on exposure to them. That is, the stress tests moved the market from a “pooled” equilibrium, in which all banks are assumed to be at risk of failure, to a “separating” equilibrium that differentiates between good banks and bad banks. (And banks that failed stress tests were forcibly recapitalized, resulting in a dilution of existing shareholders.) This created conditions conducive to the gradual recovery of lending. The critical point here is that the stress tests were widely considered credible — if they were not, the process would not have been effective in changing perceptions.

Not all attempts to resuscitate inter-bank lending were so conceived, however. Europe attempted to emulate the U.S. experience, but sadly, as the BIS data suggests, it was less successful. The problem, arguably, was that the tests were widely viewed as flawed — I think it is fair to say that, rather than designed to enforce a separating equilibrium that would identify candidates for recapitalization, many observers viewed the process as one intended to convince markets that all banks were healthy. Whether this was by design or the unfortunate outcome of inadequate preparation is open to debate. I am inclined to believe the latter. The dilemma was what to do in the absence of a credible backstop, or recapitalization fund, should a bank be found to be lacking capital. In such circumstances, and in an environment in which European bank exposure to so-called toxic assets was undoubtedly significant, those administering stress tests were put in an unenviable position — the more robust (and hence credible) the stress tests, the greater the likelihood that banks would be found wanting capital. But if these banks couldn't be recapitalized, they would fail, possibility triggering another crisis. The decision might have been taken, therefore, to make the test less rigorous. Yet, in the context of the suspicion that prevailed at the time, this undermined the effectiveness of the entire operation.

This issue is timely and important. Europe is once again engaged in stress test of its banks.

Will it be credible?

The answer, I think, is very likely. This time the ECB has a critical role in the process and Mario Draghi will not want to undermine his credibility as ECB President by presiding over a flawed or weak review of bank solvency. Moreover, he has a clear incentive to ensure that the process is effective. As the charts below illustrate, five years after the onset of the crisis, European banking is still suffering from the melancholy, long, withdrawing roar of trust. The result of this dysfunction is a risk of deflation that looms menacingly over prospects for European recovery even as a Russian geopolitical gambit introduces greater uncertainty.

Restoring trust to European banking is central to getting the euro zone bank on track. 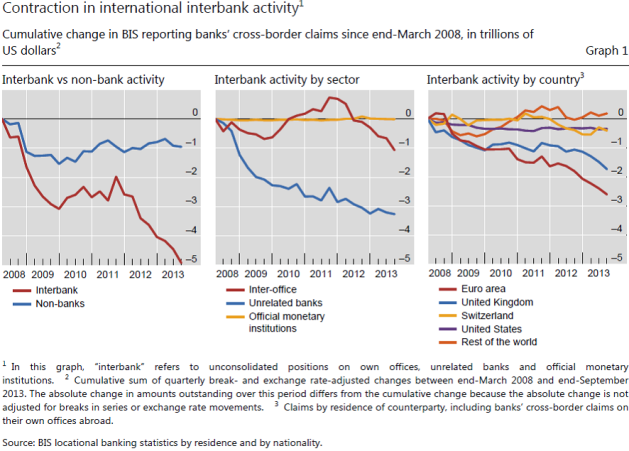