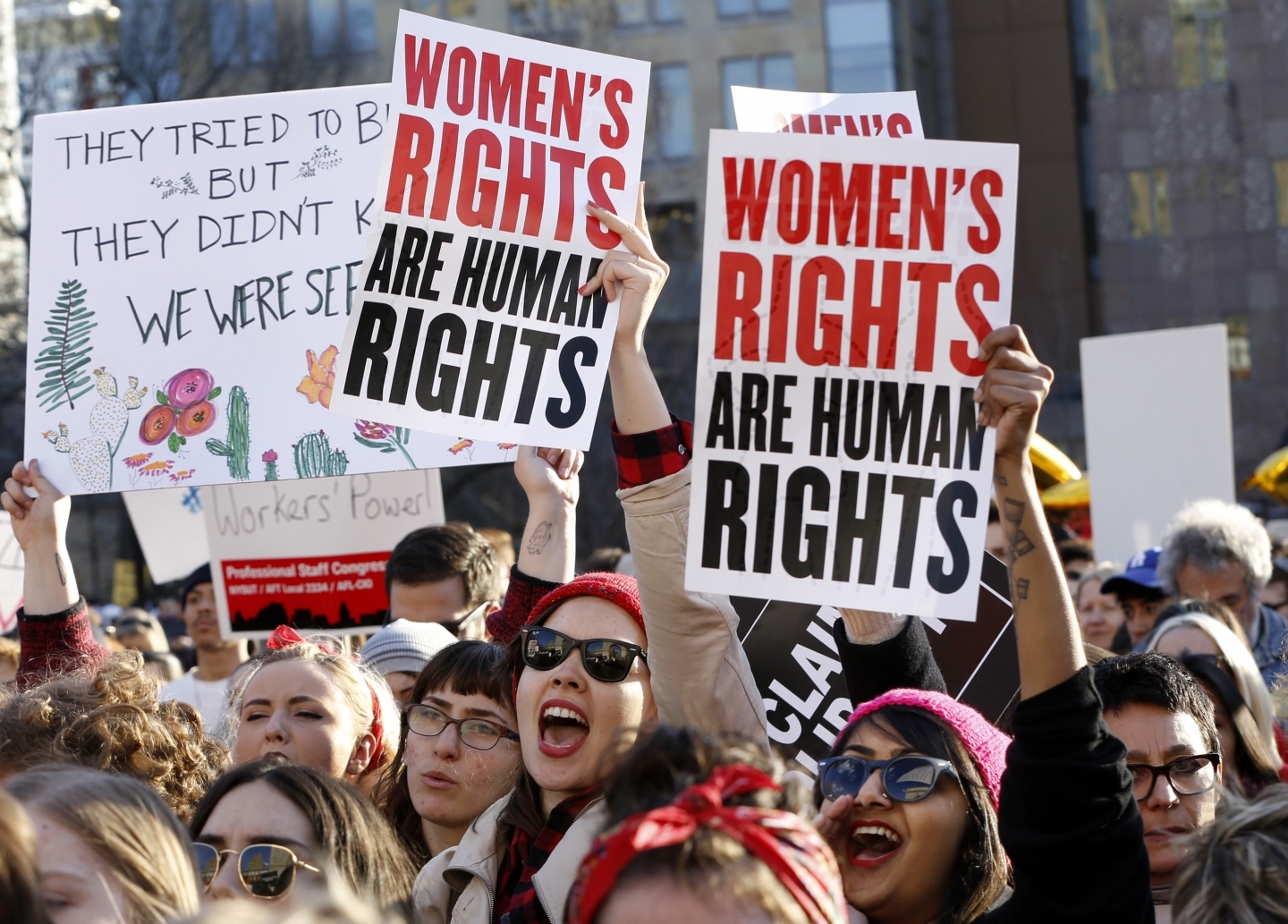 Women from labour organizations and other grassroots groups chant during a rally as part of International Women's Strike NYC. (AP Photo/Kathy Willens)

Indeed, inequalities between and within countries are on the rise. According to Oxfam, 82 percent of the wealth generated last year went to the richest one percent of the global population, while the 3.7 billion people who make up the poorest half of the world saw no increase in their wealth. Trade — once seen as a key solution to poverty and underdevelopment — is now singled out as one of the main causes. The spread of anti-globalization and anti-trade movements reflects changing sentiments toward trade.

Among those that globalization and international trade have “left behind” are many women. While open markets and global value chains have provided new employment opportunities for women ­— in most cases, job quality, wages, prospects for skill development and advancement have remained limited.

Women continue to be a cheap source of labour that firms can use to cut production costs and tackle global competition. In manufacturing, women work in a limited number of sectors, mainly in light manufacturing, and within these sectors, they perform functions linked to production rather than to supervision or management. In agriculture, women are often found in subsistence agriculture as producers or as members of family enterprises and are often unpaid. In services, they tend to be clustered in the low-skill segments of the sector, such as street vendors or informal cross-border traders. Their ability to switch from one sector to another is hampered by their skill level, limited access to productive resources, time poverty and social norms that dictate which jobs are suitable for women.

These limitations imply that women are less able than men to react to shocks in the market. If the sectors in which women work decline because of import competition, or if the products they produce or the services they provide are outperformed in price and quality by imports, their ability to relocate is limited.

Among the benefits of international trade — providing domestic producers with much larger markets, increasing the efficiency of domestic production and allowing it to attain economies of scale, and being a complement and a condition of the development of countries’ productive capacities — is technology transfer. Such a positive phenomenon that allows countries to move up the technological ladder has often had negative repercussion on women. Indeed, in several countries, especially in Asia, technological upgrading has resulted in large layoffs of female workers, since women lack the necessary skills to be involved in the production of more sophisticated goods.

In agriculture, women face two main risks. First, they may be unable to compete with imported products; second, they may be crowded out by export- and commercially-oriented operations. Moreover, when a crop becomes appealing for export, it usually passes under men’s control.

Women’s dismissals and marginalization are often among the “collateral damages” of trade reforms pursued because of their potential benefit to a country. Arguably, trade measures and trade agreements can play a role in prioritizing women’s well-being. What follows are two possible ways to do so.

First, include specific reference to gender equality and women’s economic empowerment in trade agreements. Second, assess the potential impact of trade reform not only on a country, but within specific segments of the population, including women.

Let us start with the first path. Some recent free trade agreements (FTAs) include trade and gender chapters. While the examples so far are those of the Chile-Uruguay and Chile-Canada FTAs, other countries and regional blocks, including the European Union, have announced their intention to follow suit.

This definitely provides more visibility for gender issues by moving them from the “aspirations” of the preamble of the agreements or the technicalities of the technical cooperation sections to the core text. Nevertheless, the trade and gender chapters remain a “soft” component of the agreements: they do not establish gender-related rules that the parties should comply with or thresholds to be reached. They do not imply harmonization of gender-related legislation between the parties, they are excluded from the dispute-settlement mechanism and they do not refer to the possible impact of the agreement on women.

The second path to making trade policy gender responsive is to assess its gendered impact before implementation. Such an assessment would help determine how women would be affected by a proposed trade reform. If negative impacts are expected, the negotiation of the agreement may be put on hold, its terms changed or complementary measures put in place. The United Nations Conference on Trade and Development has developed a methodology — known as the Trade and Gender Toolbox — to carry out ex ante gender assessments of trade reforms. In its sustainable impact assessments of trade agreements, the European Union looks at the three pillars of sustainable development: economic, social and environmental. An in-depth gender assessment is, however, missing, despite gender equality being a pillar of EU policy.

Women’s rights are human rights, therefore, no gender discrimination can be tolerated. Further, equal opportunities for women to become full-fledged economic actors would be “smart economics” that would enhance a country’s performance and competitiveness.

The steps taken so far to address gender in trade policy do not seem particularly bold, and there is a discrepancy between “strong” commitments and rather “light” implementation. The Declaration on Trade and Women’s Economic Empowerment is another example of a mild approach to mainstreaming gender in trade.

The shortcomings in the way countries are executing gender analysis and using trade policy as an instrument for women’s economic empowerment should not obscure the fact that a real shift is taking place. The inclusion of trade and gender chapters in FTAs and support from more than two-thirds of the WTO membership for the Declaration on Trade and Women’s Economic Empowerment reflect a new interest of the trade community in gender equality and the recognition that trade can be instrumental in achieving it.