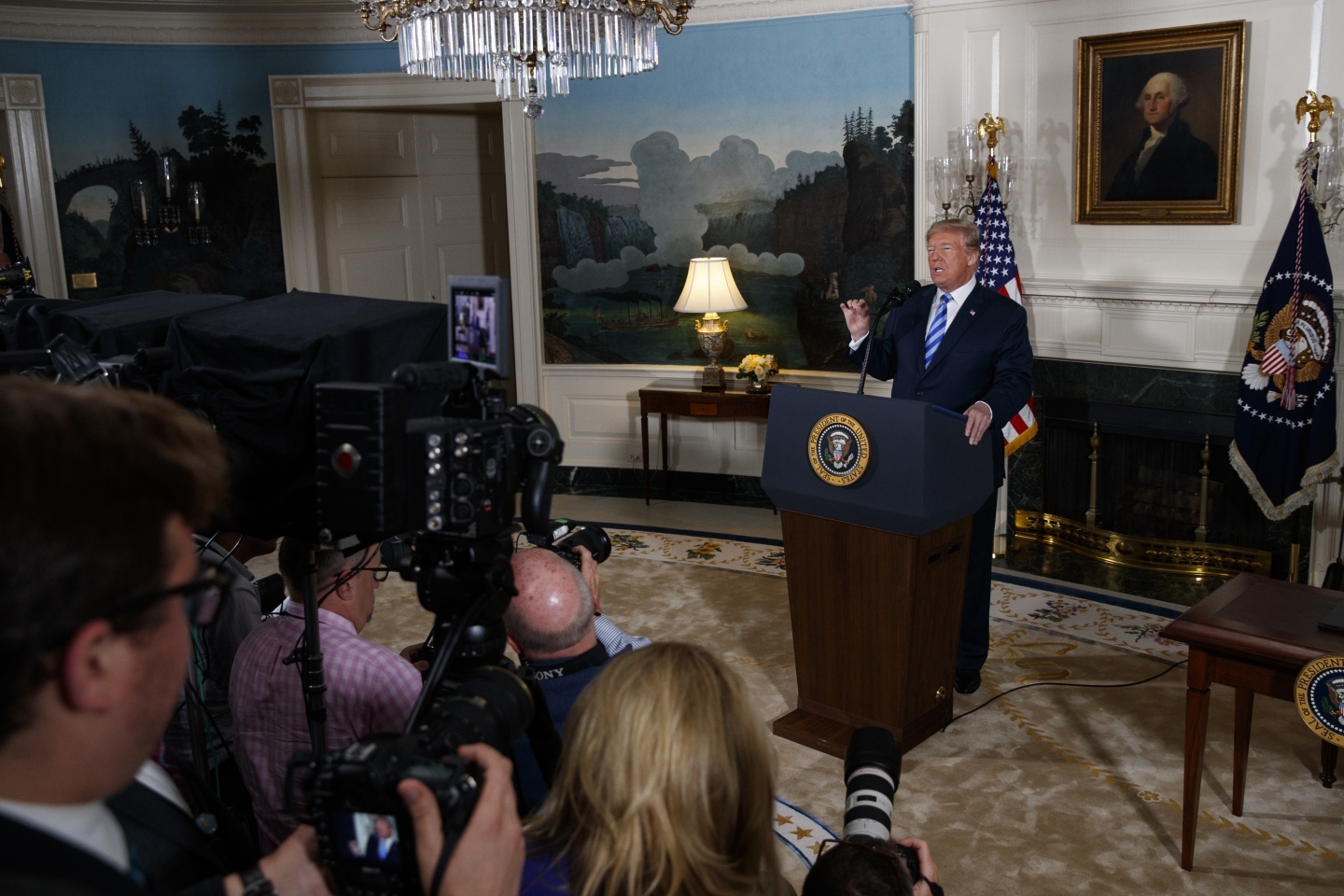 President Donald Trump delivers a statement on the Iran nuclear deal from the Diplomatic Reception Room of the White House on May 8, 2018 in Washington. (AP Photo/Evan Vucci)

As expected, United States President Donald Trump took a significant step on Tuesday toward dismantling the Joint Comprehensive Plan of Action (JCPOA), the 2015 deal that Barack Obama’s administration made to curtail Iran’s most sensitive nuclear activities for a 15-year period.

While the JCPOA is not dead yet, it is in serious trouble. Whether the agreement lives or dies, Tuesday’s decision will have consequences not just for Iran and the Middle East, but will affect the strategic relationship between the United States and the European Union as well.

It could also have an unwelcome effect on Washington’s efforts to negotiate a cap or end to North Korea’s nuclear weapons program.

This is because Iran has not violated the JCPOA in any substantive manner. Yes, there have been a couple of lapses where Tehran accumulated more heavy water than the pact allowed for, but those were minor violations that were quickly remedied. When it comes to the heart of the matter – Iran’s uranium-enrichment program and its research reactor in Arak, both of which could be used to make the fissile material for a nuclear bomb – for once, Iran has stuck to its word.

The United States is exiting the JCPOA not because of its shortcomings as an arms-control agreement, but because of its political shortcomings. The JCPOA was not negotiated by the current administration, and since it is not a treaty, the President faces few constraints on his ability to withdraw from it. The opportunity to deliver on a campaign promise and dismantle one of his predecessor’s signature accomplishments has some serious domestic political value. But more pointed is the fact that the U.S. is withdrawing because the JCPOA does not constrain Iran’s broader foreign policy — its goals in Syria, Iraq, Yemen and beyond — and it fails to permanently and irreversibly prevent Iran from ever acquiring a nuclear weapon. These were never goals of the JCPOA, but because the agreement did not address every irritant in the Iranian-American relationship, its opponents (for either well-intentioned or cynical reasons) could attack the deal on its inevitable imperfections.

Trump’s decision therefore raises the question: Is there anything Iran could have done – short of reinventing its foreign policy to appease Washington — that would have prevented this week’s events? If abiding by the JCPOA is not enough to preserve the agreement, what is?

This is a question that will loom in the mind of Pyongyang’s negotiators if and when they meet their American counterparts later this year.

Getting North Korea to agree to even modest constraints on its nuclear program will likely involve some American concessions on sanctions. But the nuclear-weapons program is not the only issue at play between North Korea and the United States. There is North Korea’s horrible human-rights record, its history of terrorist-like operations, its abduction of Japanese and South Korean citizens, its weapons trade with regimes such as Iran and possible history of nuclear co-operation with Syria. If the White House takes the same approach to North Korea that it’s taken to the JCPOA, then these are just a few of the issues that could intrude in nuclear talks, all to Pyongyang’s detriment.

So, will the North Koreans believe American promises? That’s the question. If they receive incremental sanctions relief from the United States in return for taking steps to limit their nuclear activities, will they assume that their good behaviour will keep the process going? Or will they conclude that they should be prepared to obfuscate the truth and cheat on any arrangement, since the U.S. will retroactively change the terms of engagement on a moment’s notice?

While Trump says he is confident that killing the JCPOA will send North Korea the “right message” — namely that any cheating will be resolutely punished – and that the world will understand him as a man of his word, Kim Jong-un’s government could come to the opposite conclusion: develop plans to deceive the United States today, and don’t bother bargaining in good faith, since you’re negotiating with an unreliable partner.