Iterating to a Solution or a Break-up? The Euro Crisis Continues

Once again markets have been buoyed by the outcome of yet another all night summit of EU leaders late last week (June 28-29). The weekend will provide some respite as markets begin to digest yet another iteration in the long-running saga of EU politicians struggling to contain a crisis that will simply not go away.

It is instructive then to consider the report prepared by the President of the European Council, Mr. Herman van Rompuy, which is intended to lay out the future shape of the European Monetary Union (EMU). The Report, entitled “Towards a Genuine Economic and Monetary Union” is a brief document that explicitly recognizes the substantial weaknesses of the current euro area regime.

What is remarkable is that the report makes no attempt to explain why past political leaders agreed to introduce a common currency when the flaws, known to all (see my earlier post http://www.cigionline.org/blogs/money-mischief/back-future), were not addressed, nor were there proper mechanisms put in place to ensure that the original foundations of EMU would survive the shocks experienced throughout the world economy over the past 5 years. Not surprisingly perhaps, the current leadership does not want to remind the public of half-backed ideas dreamed up decades ago.

Did the politicians who created EMU and those who followed simply believe that the built-in asymmetries in the economic relationship between the euro zone member states would solve themselves? In particular, was there a belief that the competitiveness problems that are at the root of the current crisis would automatically disappear? After all, the view that there exists an endogenous element in monetary unions is one that has some merit—that is, if the ‘optimal’ currency area conditions are not in place at the start, perhaps economies will transform themselves over time to give the appearance that they are akin to an optimum currency.

As I pointed out in a recent panel on the euro crisis, held at the recent Canadian Economics Association meetings in Calgary (http://www.cigionline.org/articles/2012/06/cea-panel-policy-options-economic-challenges-euro-area), competitiveness may actually have been adversely affected by the creation of EMU, as the chart below, which plots the real exchange rate for select euro zone member countries, reveals. Note especially the growing gap between Spain, Italy and Germany. Spain and Italy became substantially less competitive over time while Germany’s competitiveness was relatively more stable. Greece is clearly not the worst performer in the group shown, at least if Germany is the benchmark. 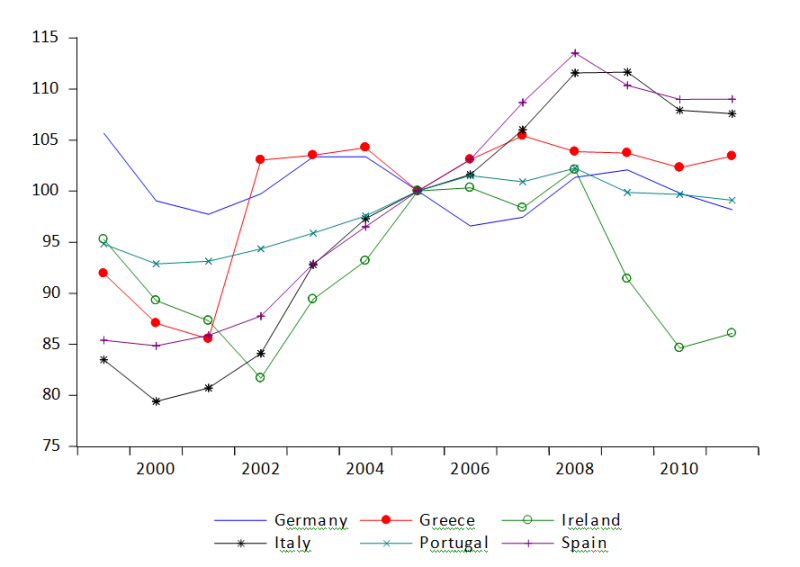 If, instead, we examine unit labour costs, the picture below suggests that lack of competitiveness in labour costs is a problem not only in the crisis states. For example, the Netherlands, which likely preceded the rest of the euro zone into a second recession, grew markedly less competitive, vis-à-vis Germany, over time. 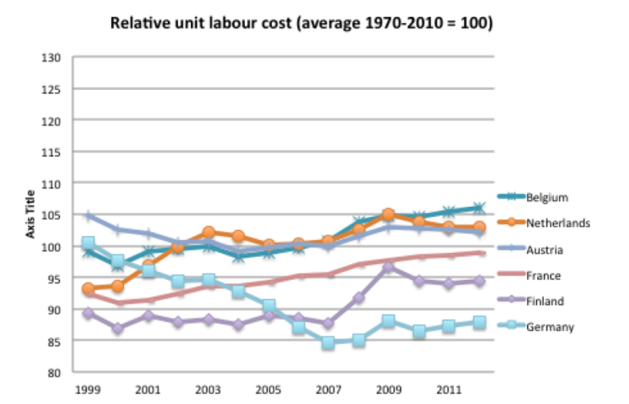 Given the current state of affairs one wonders what Mr. Rompuy, and his collaborators, namely the Presidents of the European Commission, the Eurogroup, and the European Central Bank, have in mind when the report states that “[M]aintaining an appropriate level of competitiveness, coordination and convergence…is essential.” These conditions were rarely present in the past and there is little reason to believe that the sought after ‘balance’ will be restored in future.

At least the report acknowledges, but is still unable to provide anything resembling a road map, that the survival of the euro will require more fiscal integration, greater financial integration, and greater economic policy coordination among the euro zone member states. We already knew that.

Nevertheless, what is interesting is that, while the financial press especially has obsessed, for understandable reasons, on the economic dimensions of the crisis, the real stumbling block and greatest threat to the euro may well come from the political dimension. Indeed, over the medium-term, perhaps the most difficult problem facing the current crop of euro zone political leaders is achieving the objective which the Report highlights, namely that “EMU integration will require a stronger democratic basis and broad support from citizens.” The existing level of support, at least according to recent polls, has dropped rather precipitously (see http://www.bloomberg.com/news/2012-06-24/germans-show-lowest-support-for-keeping-euro-in-four-nation-poll.html). The ‘citizens’ van Rompuy’s Report refers to did not quite buy into the euro as it currently operates and it is equally clear if the political leaders of the 1980s and 1990s did not spell out the inherent risks of a common currency. Instead, the public was sold only on the political ideals behind the single currency area. My worry is that the current leadership in the EU and the euro zone is not up to the task to bring the public on their side. Iterating to a better functioning EMU may well lead to a break-up not the stated desire for a more ‘genuine’ monetary union.