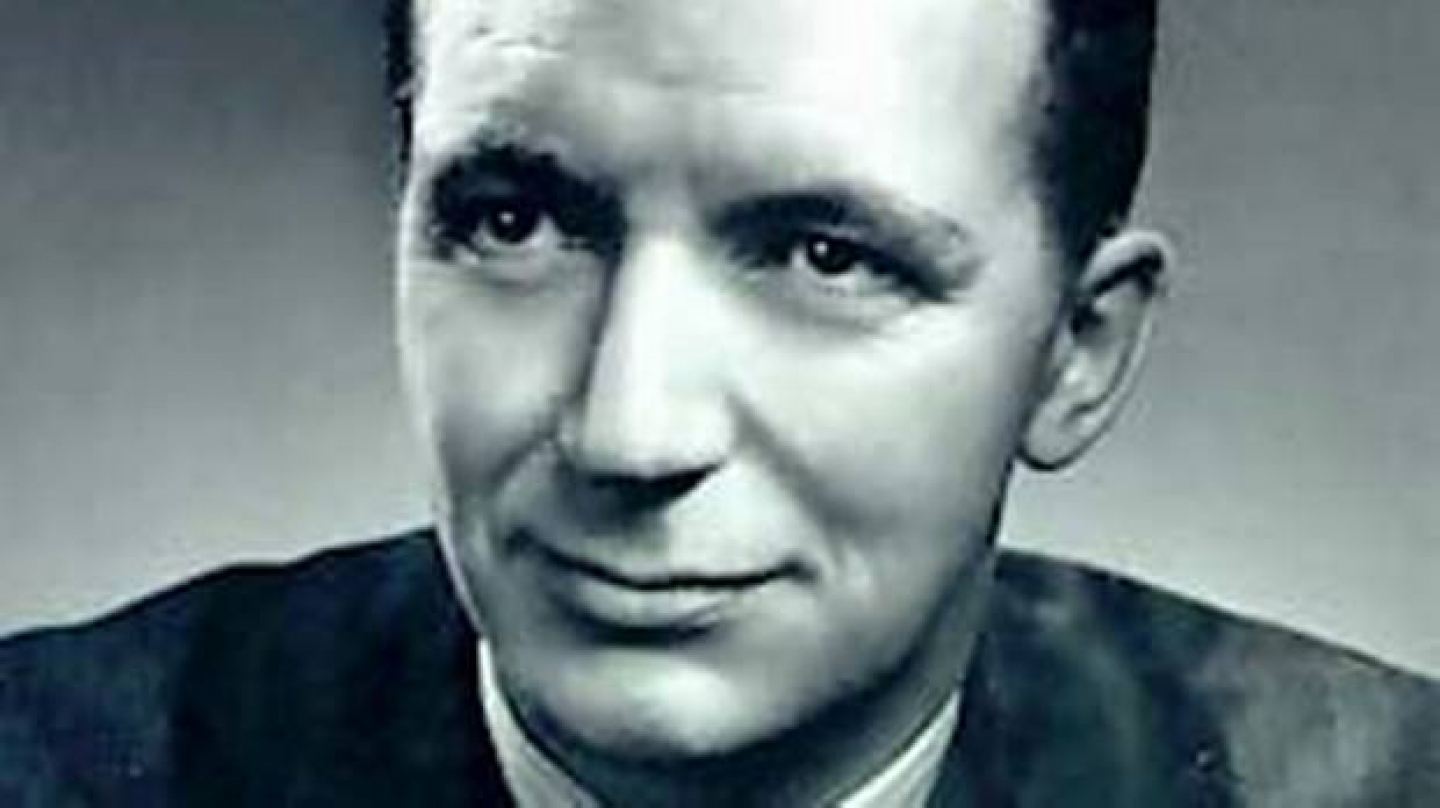 James Coyne was Governor of the Bank of Canada from 1955 until 1961 and passed away a few days ago at the age of 102. In spite of the fact that the "Affair" that carries his name is over 50 years old, his passing still merits an extensive piece in Canada’s major newspapers (see the Globe and Mail’s article as well as the National Post’s article about his passing). Although the title of this blog is Money Mischief, after the title of Milton Friedman’s book about the missteps and occasionally disastrous monetary policies of the past, there was always a special place in my monetary historian heart for the period when James Coyne was Governor of the Bank of Canada. I have written about that period in monetary history a number of times, notably in my book on the evolution of Central Banking during the second half of the 20th Century (The Changing Face of Central Banking, Cambridge University Press, 2002). Two subsequent journal articles, in the European Review of Economic History and the Canadian Journal of Economics, published in 2009 and 2010, examine the exchange rate and monetary policies of the Coyne era, respectively. Jim Powell’s excellent history of Coyne’s career at the Bank is also a source that interested readers should look at.

At the age of 50, James Coyne resigned as Governor of the Bank of Canada after he was vindicated by a vote in the Senate. The battle Coyne fought with the then conservative Prime Minister, John Diefenbaker, over his generous pension once he left the Bank, was a side show. The real battle was about monetary policy and who should ultimately be responsible for its management. Indeed, that battle was fought not only with academics at the time but also with the then Conservative Finance Minister, Donald Fleming. Not only did the conflict that eventually erupted into what became known as the "Coyne affair" spillover into the popular press (publicity about the central bank and monetary policy that was almost unheard of then) but it led to a fundamental reshaping of the Bank of Canada’s place in our system of governance. The fallout from the affair would take place under his successor, Louis Rasminsky, whose tenure ushered in a new Bank of Canada Act with, at least from my point of view, the most important reform in the Bank’s history, namely the so-called "directive;" more about this later.

Today, as some observers fret about central banks losing their independence, we forget that tension between a central bank and the government that appoints central bankers is an age old one. There was plenty of academic and public discussion about how much independence a central bank ought to have even during the 1950s. Coyne was a strong proponent of the view that the goals of monetary policy ought to be set by democratically accountable politicians, preferably after consulting with the "experts," while the day-to-day decisions of the central bank, and the setting of the stance of monetary policy, ought to be left entirely in the hands of the monetary authority.

What if there is a conflict over monetary policy? Although the directive in the Bank of Canada Act is often associated with Louis Rasminsky—for good reason since the proposed legal change was in effect a requirement he insisted be embedded into future legislation governing the Bank of Canada at the time of his appointment—Coyne actually advocated such a rule even before the conflict between the Bank and the Conservative government began to surface in the late 1950s. One can perhaps understand some of the origins of the conflict from the chart below, taken from by CJE article referred to above, which plots unemployment rates in Canada and the US in the 1950s. 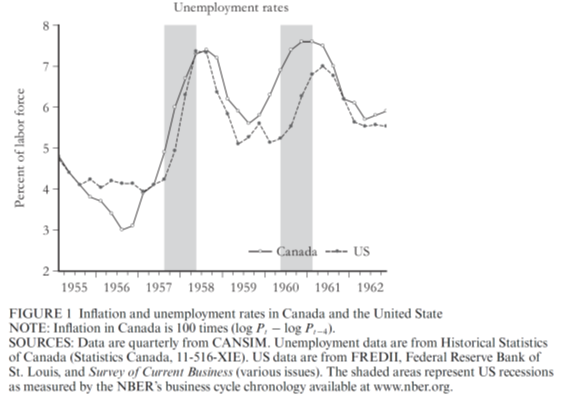 Unemployment was rising in both countries but the looming recession of the late 1950s proved to be more severe in Canada than in the U.S.

Today, we are used to thinking about what central banks do by following their views and decisions about interest rates. In spite of the era of quantitative and credit easing, public discussions around monetary policy still focus on when central banks will raise policy rates which sit at, or are nearing, the so-called zero lower bound. However, it is now long forgotten that the Bank of Canada, under Coyne’s leadership, was perhaps the first central bank to use short-term interest rates as an instrument of monetary policy in an era when monetary aggregates were more likely to primarily guide the setting of the stance of monetary policy. To be sure, interest rates were not, or could not, be as easily influenced by central bank actions then as they are today. This is not only because markets for short-term government debt were still immature after World War II, but also because Bank officials at the time were experimenting and not certain what to make of the effectiveness of the interest rate as an instrument of monetary policy. In any event, the impact was clear: as shown below (again from my CJE article) as unemployment was rising, short-term interest rates were rising sharply in the late 1950s. 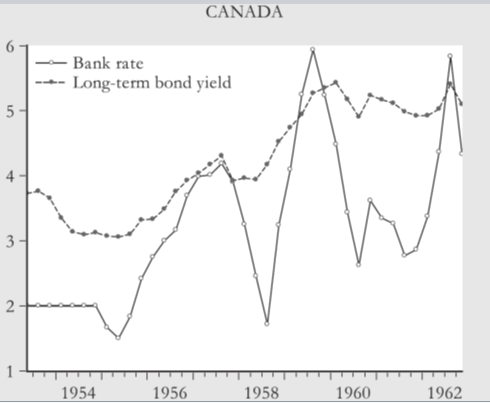 For some, notably Scott Gordon of Carleton University and several other academic economists at the time, this was madness. The cure for a slowing economy was not higher but lower interest rates. The vitriol was palpable in several lengthy pieces published in national newspapers at the time. However, for Coyne, who also distinguished himself by giving several speeches—also relatively unheard of from central bankers during this era—the principal concern was the maintenance of some form of price stability. As seen from the figure below (again from my CJE article) rising inflation was seen as a clear and present danger at the Bank, fueled by a fiscal policy which appeared to be out of step with the ongoing monetary policy. It comes as no surprise that the disagreement between the Bank and the government became public. 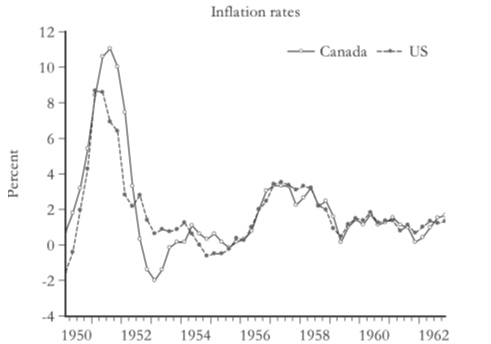 Was Coyne making matters worse? Fifty plus years later we are once again, perhaps not in Canada but certainly elsewhere, seeing fiscal and monetary policies seemingly working at cross purposes. Real interest rates rose substantially an indication of a sharp tightening of monetary policy but only briefly. The graph below shows the rise in the real cost of borrowing (i.e. the difference between the nominal interest rate and a proxy for expected inflation) during the height of the crisis. 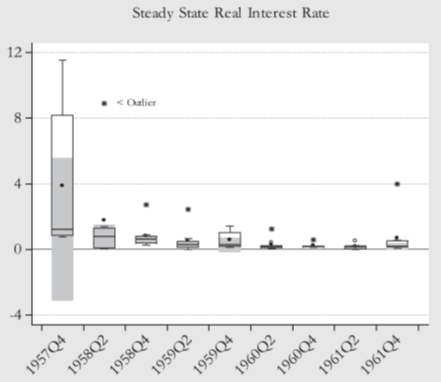 Source: Siklos (2010).
NOTE: The box plots give the mean estimates (point inside the box) for the two parameters described above, while the boxed area represents the third (top) and first (bottom) quartiles, respectively. The shaded area is a 95% confidence interval for the median (centre of the shaded area). Values outside the "whiskers" of the box plot are considered to be "outliners."

However, the Bank made its point, inflation fell quickly and, in the end, Coyne and the Bank may well have been vindicated. In other words, one way of viewing what happened at the time is to think of the central bank as doing what the fiscal authorities would not do. Sound familiar? In some parts of the world this scenario is being repeated. As for the sharp tightening of monetary policy and its consequences, Coyne did what a certain Paul Volcker would effectively repeat in the US in the late 1980s when fiscal policy was threatening the US economy with high and rising inflation. Volcker put a stop to it the only way a central banker knew how, by sharply tightening monetary policy. Volcker is still viewed today as having delivered the U.S. from a more disastrous economic outcome.

What we are not seeing today (yet) is a serious attempt to remove the autonomy central banks around the world have gained over the past two or three decades. While relatively few—too few in my opinion (think of the European Central Bank)—central bank laws contain a directive of the kind written into the Bank of Canada Act, there is now seemingly an unwritten rule that politicians restrict central bank independence at their peril. The reason is simple: it then becomes their responsibility to explain in public why the central bank is wrong and what they would do instead. The central bank does not escape unscathed either as autonomy provides the incentive to explain why the central bank acts the way it does. In other words, with autonomy there is an expectation of accountability and transparency. Before Coyne became Governor of the Bank of Canada the central bank was only required to submit an Annual Report that amounted to little more than a balance sheet. Coyne began the practice of explaining the conduct of monetary policy in Canada, a practice already common for the US Federal Reserve, but rarely seen elsewhere.

Coyne’s performance during the second half of his Governorship is somewhat more mixed (in my CJE article I concluded that the case against him was not proven). Regardless about one’s views on the appropriateness of the Bank’s actions in the late 1950s, the impact of the Coyne affair lives on. The directive effectively clarified the responsibilities of the Bank vis-à-vis the government. The directive, reproduced below, suggests that in the event of a disagreement with the Bank over the current course of monetary policy it is the responsibility of the politicians to explain to Parliament and, by implication, to citizens why it disagrees with the central bank’s position and, only then, to direct the central bank to change course. No directive has ever been issued. This is one of the most important and remarkable legacies of Coyne’s tenure as Governor of the Bank of Canada and it worth remembering.

(2) If, notwithstanding the consultations provided for in subsection (1), there should emerge a difference of opinion between the Minister and the Bank concerning the monetary policy to be followed, the Minister may, after consultation with the Governor and with the approval of the Governor in Council, give to the Governor a written directive concerning monetary policy, in specific terms and applicable for a specified period, and the Bank shall comply with the directive.