People make their way in front of the parliament in Athens, Monday, Feb. 23, 2015. Greece will present a list of proposed reforms to debt inspectors on Monday to get final approval for an extension to its rescue loans. (AP Photo/Yorgos Karahalis)

Last week ended with positive news from Europe. The Greek government and the EU agreed to a four-month extension of the troika "bailout," providing a temporary respite from the elevated levels of uncertainty attached to the possible expiration of the program.

A key condition (and likely test of goodwill) is that difficult decisions on policies will be delegated to the IMF. In effect, the IMF will judge whether the policy commitments — notably the size of the primary surplus — of the new government are sufficiently robust to merit support of the troika. This is eminently sensible. IMF programs are subject to re-negotiation if the underlying assumptions on which they are based prove not to be defensible (or unforeseen shocks derail the program). Given the excess burden of sticking to the original commitments, as calculated by Paul Krugman, here, it is likely that the IMF would cut the Greek government some slack.

In effect, the IMF will be asked to assess what constitutes a judicious balance of financing and adjustment. As long-time readers of the blog know (see the discussion, here), assisting countries strike this felicitous balance was precisely why the IMF was created.

The analogy is not exact, but the Fund is acting akin to a bankruptcy court providing a distressed firm bankruptcy protection and debtor-in-possession financing. Providing some degree of relief from its creditors to allow it time to put in place policies to grow the pie and preserve asset values. By doing so, it encourages the country to preserve with needed reforms and eschew beggar-thy-neighbour policies, in Keynes’ evocative language, “injurious to national and international prosperity.” What would those policies be in the case of Greece? Well, think of unilateral suspension of debt payments and ‘Grexit.’

The agreement is a compromise; and, like all compromises, it is a face-saving operation: it allows the Greek government to claim that the austerity agreed to by the previous government was “cancelled,” albeit with tough times ahead; and it allows the core countries of the euro zone to contend, credibly, that they will not accept unilateral attempts to re-write agreements. The latter is important to the creditor countries: while they may be talking to Syriza today, they may be dealing with Podemos at some point in the future. Grexit might be manageable for the euro zone to swallow. An untimely Spanish departure would be far harder to digest.

The one sour note to the whole affair was the comment of German Finance Minister Schäuble that “The Greeks certainly will have a difficult time to explain the deal to their voters,” as reported by The Financial Times. It is possible that he was playing to the crowd, hoping to convince German voters, or that he didn’t give ground. Or his comment may be an indication that he fully expects the IMF to uphold the original primary surplus targets; in which case, we might be in for more turbulence ahead.

If it is the latter, fear the economic consequences of Herr Schäuble.

As noted in a previous post, with the policy parameters for the euro zone largely determined in Berlin, adjustment in Greece can only come through “internal devaluation” or disinflation/deflation greater than that in the core countries. To a reader of history, particularly the history of The Dark Valley of the 1920s, this sounds an awful lot like Winston Churchill’s ill-fated decision to put the Pound back on the dysfunctional gold standard in 1925.[1] As Chancellor of the Exchequer, Churchill grappled with the issue; he solicited the views of proponents and opponents. In the end, however, he listened to expert advice (the very serious people of his day?) and returned the Pound to its pre-war parity. Sadly, this resulted in a severe over-valuation of the currency, which condemned the U.K. a severe contraction as the needed medicine to drive wages down to facilitate real exchange rate depreciation through lower wages and prices. This sounds a lot like “internal devaluation.” The difference is that Churchill forced deflation on his own country as a key element of the prevailing economic orthodoxy; he didn't foist it on to others.

If the German finance minister is unwilling to ease up the surplus targets, he is asking, in effect, a democratically elected government to knowingly impose hardship on its people in order to satisfy foreign creditors.

I wonder whether that has happened before and what might have come of it? 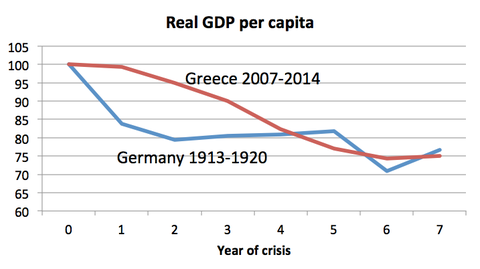 [1]Piers Brendon, The Dark Valley: A Panorama of the 1930s, Vintage Press (2002); J.M. Keynes, The Economic Consequences of Mr. Churchill a polemic subsequently re, published in Essays in Persuasion, 1930.