While most people are oblivious to it, there is a war raging in the blogosphere over the role of macroeconomic stabilization policy in the current global conjuncture. The battle pits the illuminati of the economics profession (and sadly — pathetically — a well-known Harvard history professor) against each other in internecine debates over basic economic models and “what Keynes really meant” when he reflected on the human condition.

The reflection in question is Keynes’ remark that “In the long run we are all dead.”  Taken out of context, this has been mistakenly interpreted, or intentionally misrepresented, as an irresponsible, frivolous, attitude to economic policy and the welfare of future generations: that policy makers need not be concerned with deficits, since those who benefit from government largesse today will not be around tomorrow to repay the bondholders who finance current consumption. As Paul Krugman has noted, however, Keynes was actually making a simple analytical point.[1] In effect, he argued that economists should not be content with their models if these models only explain what happens when the economy is in equilibrium at full employment. Such partial theories may be helpful in normal times, but if they do not help deal with sustained economic stagnation and protracted high unemployment, as the global economy suffered in the 1930s and is today replicated in some euro zone countries, they must be supplemented with a general theory; one that can be applied in times of slumps as well as booms.

In his General Theory of Employment, Interest and Prices, published in 1936, Keynes argued that there conditions under which market forces are insufficiently strong to move the economy to and keep the economy at full employment. In this respect, his support for fiscal stimulus was not based on some crass political calculus or moral decadence, but, rather, reflected a philosophical concern for the welfare of the current as well as future generations. If the economy is trapped in a slump, Keynes reasoned, and fiscal policy could make those living today better off without reducing the welfare of those yet unborn (who would benefit from the higher incomes and increased capital stock they would inherit), it would be irrational not to engage in stimulus in deference to some Victorian principle regarding the moral superiority of saving.[2] After all, making one person (generation) better off, without reducing the welfare of the other person (generation) is a Pareto improvement; economics and economists are all about Pareto improvements.

To make his case, Keynes first had to debunk Say’s Law — the notion that supply creates its own demand. In a world of barter exchange, Say’s Law holds pretty much by assumption. If, for whatever reason, there is too much of one good produced, the price of that good will fall, encouraging higher demand until demand equals supply. Moreover, full employment is assured. This is because the falling “price” (or, more precisely, the rate of exchange between goods) of the good in excess supply raises the real wages of workers, increasing their demand for other goods, so that as soon as workers are released from the industry with excess supply they are absorbed by other firms expanding output.

This might have been a reasonably good approximation of an agrarian, pre-industrial society without financial assets. But once money is introduced into the picture, it becomes more difficult to sustain Say’s Law. The reason is that if people hoard cash (forgo consumption of goods for holding assets) they destroy the potential demand that would otherwise restore full employment in the event of some shock to the economy. (Savings deposits that are lent out to fund investment projects do not entail this potential failure.) It is the demand for liquidity — for cash that sits idle — that vitiates the automatic self-righting property of market forces. And it is this hoarding of cash that creates a liquidity trap in which interest rates fall to the zero lower bound and conventional monetary policy is rendered ineffective. Think of the liquidity trap as a situation in which people hold cash anticipating deflation — falling prices — that increases the real purchasing power of those cash balances. Because they are hoarding cash and not spending, output continues to fall, unemployment remains too high, and deflation continues unabated. Equilibrium can only be restored if “the” interest rate that balances savings and investment is negative; yet nominal rates can’t break the zero lower bound (while real, or inflation-adjusted, interest rates are positive given continuing deflation).

Of course, for generations of economists brought up on the faith of a self-righting economy, in which market forces could be relied upon keep the economy at full employment, such notions were blasphemy. Keynes’ sometimes difficult prose didn’t help. However, his words were transposed into shorthand equations by J.R. Hicks, who developed the IS-LM model — IS representing combinations of output and interest rate levels at which I (investment) = S (savings); LM combinations of output and interest rate levels where L (liquidity preference or money demand) = M (money stock).

Many of the debates that currently rage in macroeconomics could be adjudicated with the simple Hicks IS-LM framework from 1937. While I consider myself fortunate to have been instructed in the lessons of the Great Depression and the IS-LM framework, lo these many years ago, such crude Keynesianism fell from grace 30 years ago and is largely terra incognita for anyone who received their economics training since. With this in mind, perhaps it is useful to illustrate the debate using graphs that all economists should master — supply and demand. 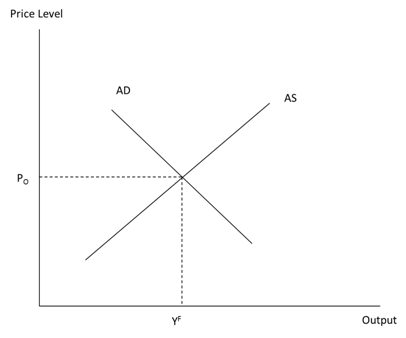 Now consider what happens when the economy is in a liquidity trap with output below the full employment level, as illustrated in figure 2. In a liquidity trap, the aggregate demand curve need not be negatively sloped: Because the interest rate is unaffected at the margin by the supply or demand for money at the zero lower bound, the aggregate demand curve could conceivably be upward sloping! For the sake of clarity, assume it is vertical as in figure 2. At the same time, if wages, which constitute the largest share of production costs, are “sticky” downward below the level of output consistent with full employment — perhaps for the reasons of relative wage concerns that Keynes identified—the price level might also be sticky. For simplicity, consider the short-run aggregate supply curve drawn below with a horizontal portion at the price level P0 and a “kink” at the full employment level of output, with a normal upward (positively) sloped portion. 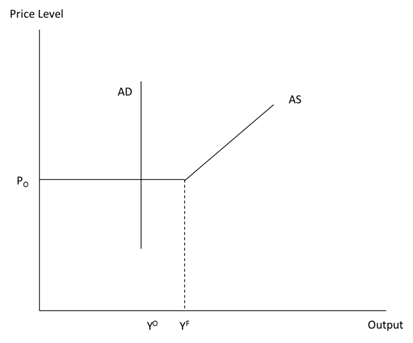 Figure 2. Aggregate Demand (AD) and Short-Run Aggregate Supply (AS) in a Liquidity Trap

What does this model tell us? First, that conventional monetary policy — a one-time expansion of the money supply — that does not shift the aggregate demand curve will not free the economy from the liquidity trap.[3]Second, fiscal stimulus, which shifts the aggregate demand curve to the right, will be effective in expanding output and returning the economy to full employment. Although this model does not represents some unassailable economic “truth,” and is subject to refutation, it does offer a way of understanding the extraordinary circumstances in which some economies languish and provides guidance to policy.

[1] The full quotation is: “But this long run is a misleading guide to current affairs. In the long run we are all dead. Economists set themselves too easy, too useless a task if in tempestuous seasons they can only tell us that when the storm is long past the ocean is flat again.”

[2] The suggestion that Keynes was oblivious to the welfare of future generations ignores the fact that he and a graduate student, Frank Ramsey, developed the Keynes-Ramsey rule on the optimal path of savings to maximize inter-temporal utility. Of course, some might argue that strong Ricardian equivalence effects, whereby higher debt issued today raises future expected taxes, weaken the case for stimulus. The problem for advocates of Ricardian equivalence is that, among the manifold caveats that limit its application, if it applies, it would likely only be at full employment. Yet, the entire rationale for stimulus is to help move the economy from a situation of prolonged stagnation (i.e., underemployment) to full employment.

[3] Additions to the money supply simply get added to the cash balances hoarded by households. This is not to say that unconventional monetary policy would be similarly ineffective: Unconventional monetary policy that raises expected inflation and succeeds in lowering the real interest rate could break the bonds of the liquidity trap, changing the slope and position of the aggregate demand curve to a point on the upward sloping portion of the aggregate supply curve in figure 2. The Bank of Japan has, arguably, recently embarked on such a path after two decades of deflation.