Of course, there is more to assessing the stance of monetary policy than simply looking at interest rates. In a small open economy, the exchange rate also matters. Yet, media reporting of the Bank’s actions tend to focus on certain elements of the press release that keep being repeated and one occasionally gets the impression that exchange rate behaviour has a separate role in assessing the state of Canada’s monetary policy. The next plot shows the record of the Canada-US dollar exchange rate since late 2008 until the middle of 2012 (left hand scale). As of this writing, the Canadian dollar remains above par with the U.S. dollar. 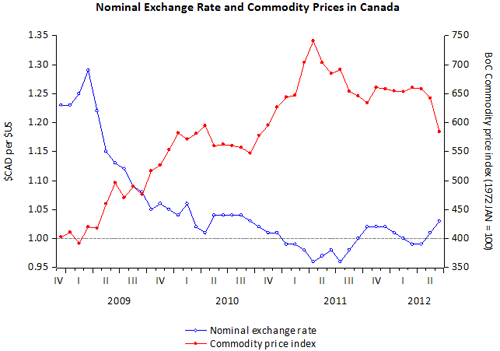 Broadly speaking, until late 2011, rising commodity prices (plotted on the right hand scale) appear to have contributed to the appreciation of the Canadian dollar. However, while commodity prices have declined, at least until the middle of 2012, the Canadian dollar continues to hover around par. More recently, not shown in the figure, commodity prices have taken a large jump (the Bank’s index rose from 613.59 to 643.76 in August 2012) and the dollar has resumed its appreciation to reach a premium of around 2 to 3 cents over the U.S. dollar at its peak. In addition, the view that Canada is a "safe haven" for funds from abroad is also likely to have had some impact on the Canadian dollar. Indeed, and in spite of, a ratings downgrade last year and the looming "fiscal cliff," the US also remains a "safe haven" for capital from abroad.

Although the Bank of Canada no longer publishes a monetary conditions index, probably for good reason (see my 2000 article in International Finance), the combination of an appreciating currency and an unchanged policy rate does suggest some modest tightening of monetary policy is taking place. When the reduction in long-term rates (see previous post) is added, it is then understandable that the Bank deems conditions to be loose although it is not obvious whether the monetary stimulus is as “considerable” as the Bank contends.

Over the medium-term an oft forgotten aggregate that may indicate whether monetary policy might eventually be tightened is the growth rate of the money supply. While there is no universally agreed upon indicator, the plot below shows money growth for a broad aggregate (so-called M2++ which includes currency, a variety of deposits, and Canada Savings Bonds). After a sharp downturn associated with the financial crisis in 2008–9, growth rates have rebounded although they remain below levels last seen in 2002 when the US was emerging from a short but mild recession after the bursting of the tech bubble. 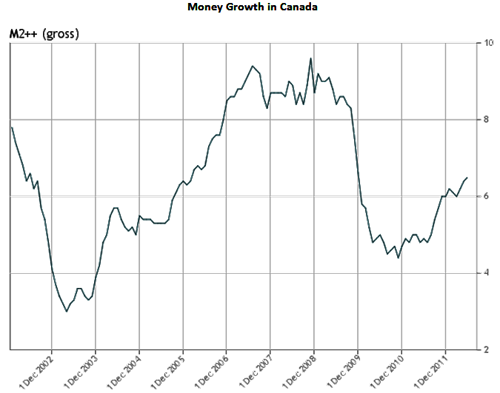 The foregoing largely summarizes some of the indicators the Bank of Canada considers "key" to understanding monetary policy.