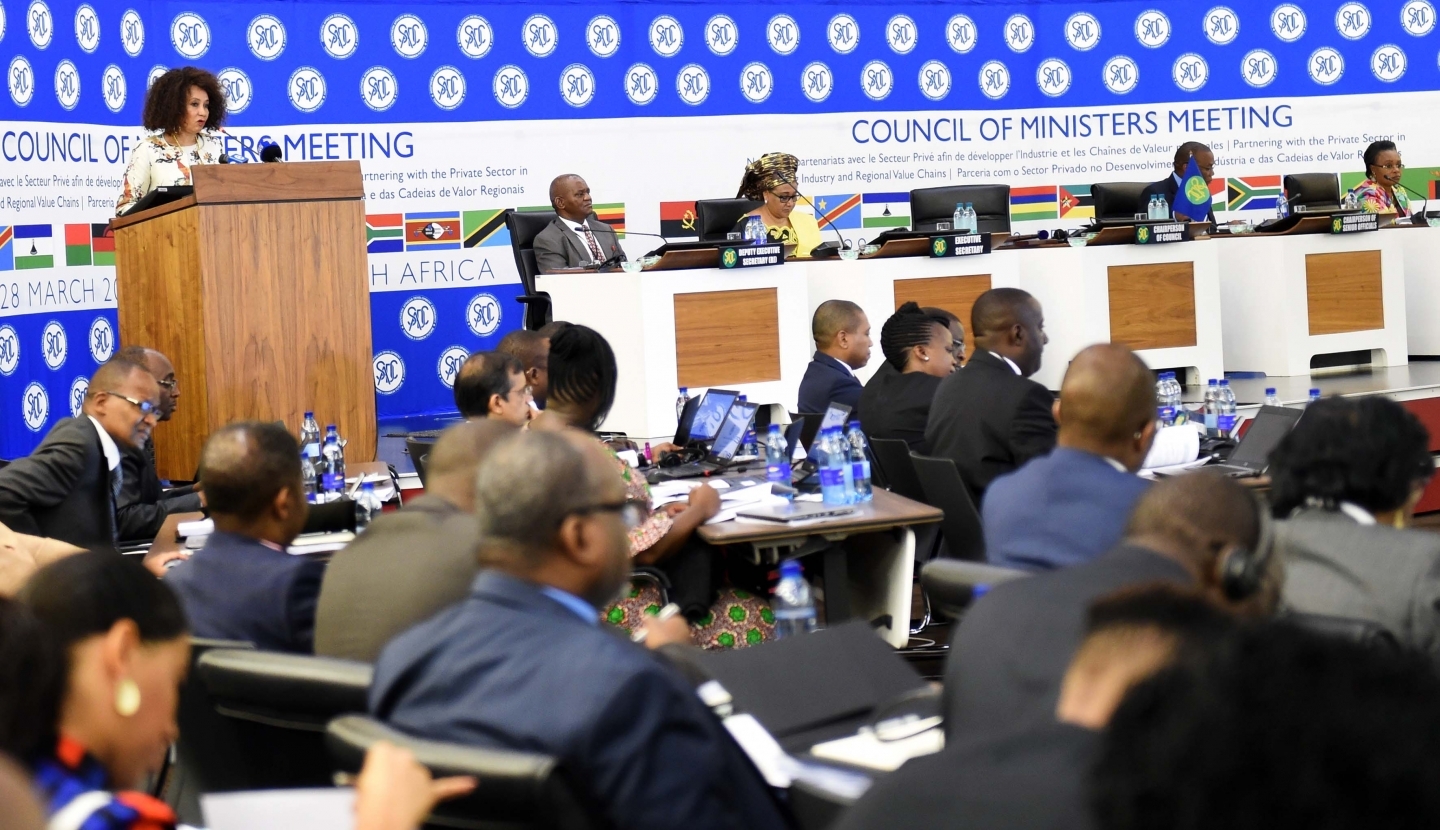 The Southern African Development Community (SADC) was established in 1992 to promote political and economic integration among its member countries. It signalled a new Africa, finally freed from apartheid and colonialism. As of 2018, the SADC is composed of 16 countries, characterized by vastly different levels of economic development and economic structure: Angola, Botswana, Comoro Islands, Democratic Republic of Congo, Lesotho, Madagascar, Malawi, Mauritius, Mozambique, Namibia, Seychelles, South Africa, Swaziland, United Republic of Tanzania, Zambia and Zimbabwe. With a combined population of more than 320 million people, the SADC is one of the most populous regions in Africa.

In 2008, the SADC met the requirements for intra-regional trade liberalization, leading to the formation of a free trade area (FTA). Other integration milestones — a customs union, common market, economic union and single currency — are behind schedule and remain to be achieved. One of the economic objectives behind the formation of the SADC was the desire to use institutional cooperation to help diversify economies and build an industrial base. Most SADC countries, however, still depend on the export of primary commodities and have been experiencing an economic decline following the latest global economic crisis. Poverty and inequality remain urgent socio-economic issues in the region and constitute key constraints for progress in human development.

With regard to inequality, gender disparities remain pervasive in the region. In the SADC, on average, women are overrepresented in informal cross-border trade (ICBT), tend to hold vulnerable and low-paying jobs, have less access to education than men, and perform the lion’s share of unpaid labour, including housework and caregiving.

To address the multiple dimensions of gender inequality, since the early stages of the integration process, the SADC has shown a strong commitment toward mainstreaming gender in the process of community building, which is, in fact, enshrined in the 1992 SADC Treaty. In 2008, the SADC countries signed the SADC Protocol on Gender and Development, which was updated in 2015. Based on the protocol, gender equality is a human right, and any form of discrimination needs to be overcome with gender-responsive legal and policy measures. Since 2009, the SADC Gender Protocol Barometer has been tracking annually the progress made by member countries in achieving the targets of the protocol. The SADC member states have either gender ministries or gender departments located within other ministries; gender focal points have been established in most national ministries to ensure the effective adoption and implementation of gender mainstreaming. In addition, all SADC countries have national gender machineries to supervise and coordinate government measures in response to commitments on gender equality and women’s empowerment.

Despite these important achievements, there are major flaws in the actual implementation of gender mainstreaming in the SADC. Gender analysis knowledge and skills remain limited, and the collection and use of gender-disaggregated statistics are not yet sufficient. With regard to trade, the SADC’s gender policy mandates the inclusion of gender targets in trade policies, but the SADC’s trade policy remains only marginally gender-mainstreamed.

In the economy, the agricultural sector continues to be the primary source of employment for women; over the process of economic integration, however, an increasing number of women have been employed in services. The proportion of women in industry has been on a slightly declining path, consistent with the declining contribution of the sector to SADC economies and the notion of premature “deindustrialization” for the SADC, as for many other African countries. In agriculture, a “gender agricultural gap” continues to be observed due to gender biases rooted in customary law and cultural norms, which limit women’s access to land, credit, training and markets. Because of limited access to formal markets, ICBT often becomes one of the only options for women to generate income and food security.

According to UN Women, women constitute about 70 percent of the informal cross-border traders in the SADC region. In manufacturing and services, women tend to hold low- and medium-skilled positions, with little opportunity for promotion. In addition, even when women work in the same occupation as men, they have fewer responsibilities and receive lower compensation.

Based on an analysis by the United Nations Conference on Trade and Development (forthcoming), trade liberalization has led to an increase in wage employment opportunities for women. Typically, however, these continue to be low-paying positions; women, in fact, continue to be a cheap source of labour for firms competing on global markets. As a result, gender-based job segregation and the gender wage gap continue to be observed.

To alleviate the economic constraints and traditional discriminatory norms that women face, the SADC countries need to adopt complementary policies that effectively promote gender equality and women’s empowerment. To further this objective, the institutions in charge of gender equality should be provided with greater financial resources and be more actively involved in decision making.

The SADC also needs to invest more in capacity building in gender analysis, budgeting and planning to ensure policy makers have the necessary skills to enforce gender mainstreaming. Given the dominance of women in ICBT, trade mechanisms that support informal traders (for example, tariff bands and simplified customs and immigration procedures), as well as proper dissemination of information about customs procedures, are key to supporting women’s economic empowerment.

Well-designed vocational training, enforcement of protection against gender-based discrimination and support for non-commercial financing (for example, solidarity finance) would help women become more competitive. With regard to trade, the SADC countries need to effectively engender their trade programs, as required by the SADC protocol. The protocol, in fact, asks member states to “adopt policies and enact laws which ensure equal access, benefit and opportunities for women and men in trade and entrepreneurship,” and to “review their national trade and entrepreneurship policies, to make them gender responsive.”

In addition to government-based measures, education and awareness programs are critical to help reduce violence against women and support women’s bargaining power within the household and, more broadly, in society.

As of now, a discrepancy remains in the SADC region between strong gender commitments and their rather weak implementation.