Only Trudeau can make a deal with Trump, whose motives other than "make America great again" remain unclear 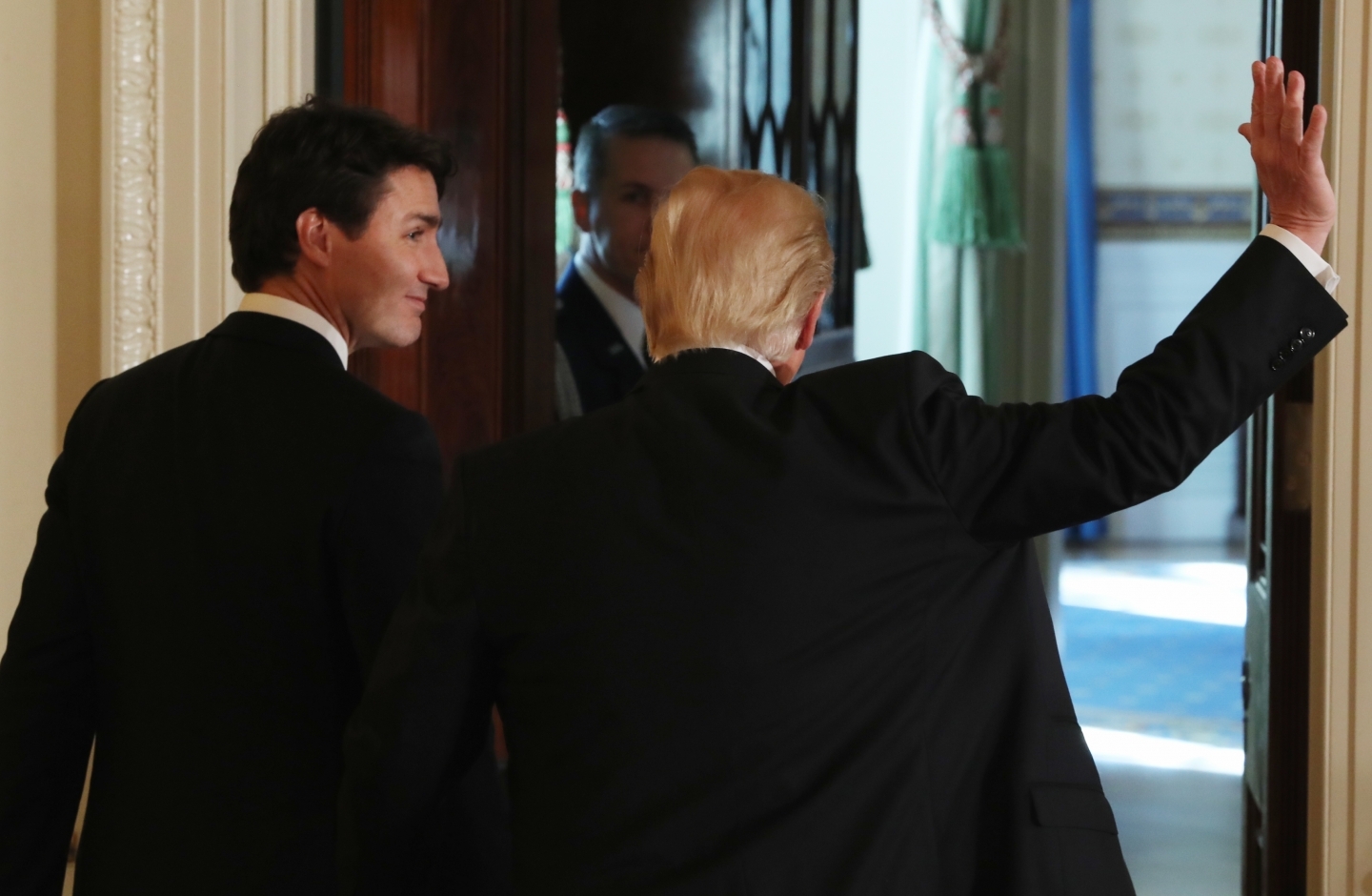 Trump waves as he and Trudeau leave the East Room of the White House, Monday, Feb. 13, 2017. (AP Photo/Andrew Harnik)

Prime Minister Justin Trudeau's two-day trip to Washington comes none too soon. Canada is being whipsawed by Donald Trump's administration on many fronts. Relations are in a deep dive as Canada gets hit by punitive measures on softwood lumber (initiated by the Obama administration) and, more recently, by the outlandishly harsh tactics by the Trump administration against Bombardier, Canada's aerospace giant, amid allegations of unfair subsidies.

A thickening fog is now enveloping the North American free-trade agreement, a cornerstone of Canadian prosperity, as talks bog down over extreme US demands on procurement, content rules for autos and dispute arbitration. The next round of NAFTA talks begins in Washington on Wednesday, so the prime minister's visit is timely and necessary.

In fact, despite all the American yammering about trade "deficits," and the initially tough rhetoric directed at China, Japan and Germany, each of which have much larger trade deficits than Canada (where the United States is actually running a modest surplus) or Mexico, the only country really being hit with punitive trade measures is Canada.

Direct contact between the two leaders is the only way to clarify objectives and identify the critical ingredients for political and economic success.

Trudeau is Canada's most powerful card. Only he can make a deal with the biggest wild card, Trump himself, whose motives other than "make America great again" remain unclear.

The prime minister has assiduously courted the American president from his first day in office and from all reports has a good personal rapport with Trump. With all the turbulence in Washington, he and his officials have chosen their words carefully, displaying discipline, tact and self-restraint.

But the prime minister is going to have to use more than his charm when he meets with the US president. He may need his boxing gloves, too.

His first challenge is to find out what Trump's view is of the political and economic ingredients of a successful negotiation. Trump's repeated insinuation that NAFTA is "the worst trade deal ever" raises suspicion about his real intent. The prime minister will have to probe his true motives — concluding a mutually satisfactory deal in revising NAFTA or abrogation.

If the president wants a deal, the prime minister must nail down a common understanding with Trump about what constitutes "success." That includes being clear to the president about Canadian objectives and what a "win" means for us, for example, better, more certain market access.

But Trudeau should also be firm with Trump about what demands will be show-stoppers. He should make it clear that we do not naively believe that any agreement is better than none. Trudeau should resist any pressure to make unilateral concessions while signalling that he reserves the right to say, "No thanks." Given the propensity for protectionist, US trade "remedy" measures, the dispute-settlement mechanism is more vital than ever and should be a "show stopper."

The prime minister has a strong hand. There is a presidential election in Mexico next year and Trump's failure to secure a new deal will have a negative impact on Republicans in the 2018 congressional elections. If Trump decides unilaterally to abrogate NAFTA, unscrambling the NAFTA omelette will require congressional approval as well as time-consuming legislative change, which will be much harder if the Democrats win either or both houses.

As demonstrated more than two decades ago in both the negotiation of the Canada-US free-trade agreement (FTA) and NAFTA, success depends upon deep political engagement and linkage at the top leadership level. On the FTA, for example, when negotiations were deadlocked, it took direct intervention by former Prime Minister Brian Mulroney with former president Ronald Reagan to break the impasse. Mulroney did the same with former President George H.W. Bush in 1990 when the Americans tried to shut Canada out of NAFTA negotiations with Mexico. North America's leaders then had a common pro-trade vision. That is not the case today and represents the biggest obstacle to success.

Trudeau's message when he goes to the White House should be friendly, but also prudently calculated to impress upon Trump that it takes two to tango and, in this case, three to make a deal.

This article was originally published by the The Globe and Mail.

Mr. Trudeau is Canada's most powerful card. Only he can make a deal with the biggest wild card, President Trump himself, whose motives other than "make America great again" remain unclear.
View Full Article
The opinions expressed in this article/multimedia are those of the author(s) and do not necessarily reflect the views of CIGI or its Board of Directors.