A New Axis of Political Confrontation Has Emerged in US 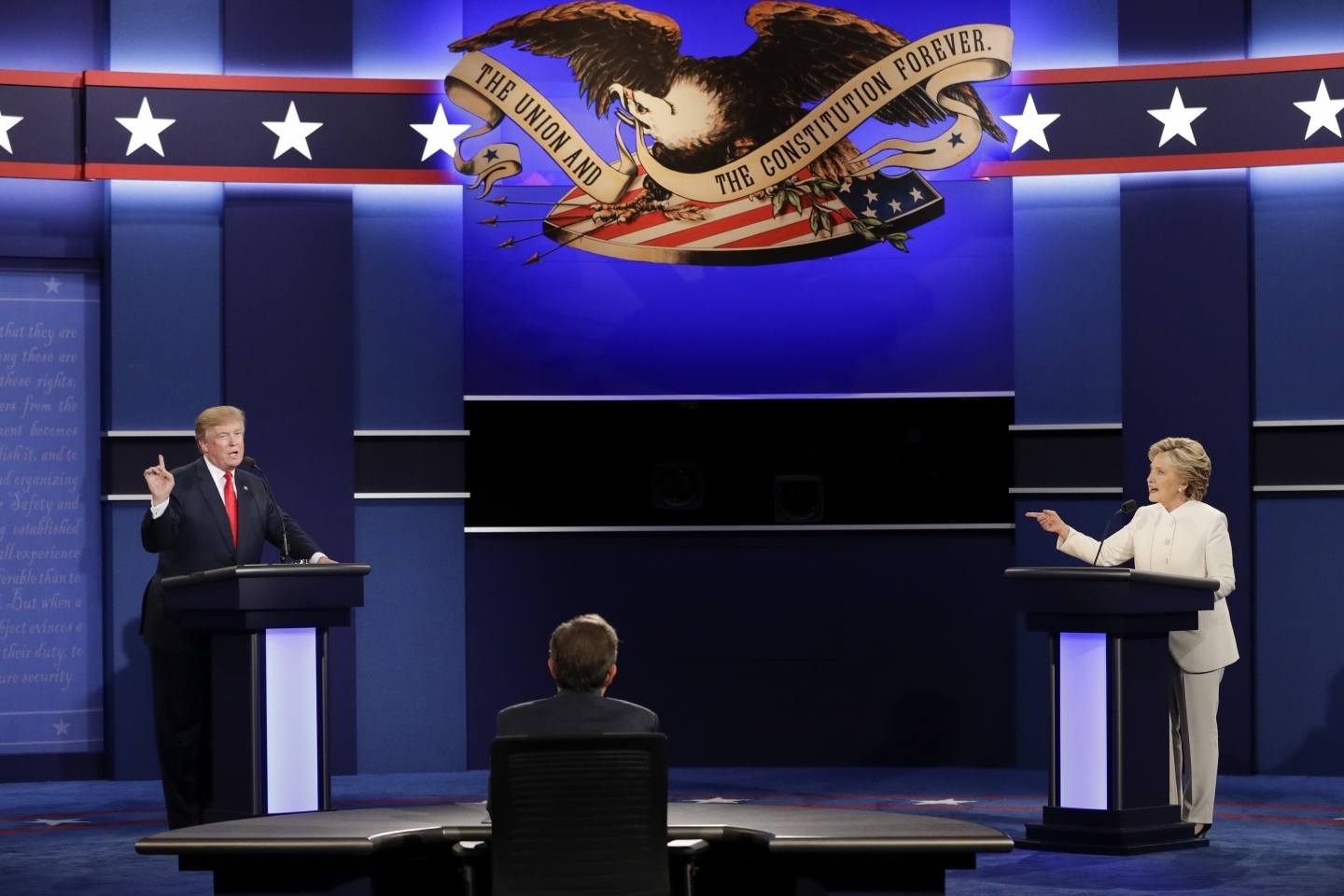 The final 2016 US Presidential Debate in Las Vegas, Nevada (The Associated Press)

Amana Fontanella-Khan is the Guardian's US Opinion Editor

Fearing a defeat in November, Donald Trump doubled down during the final US presidential debate in Las Vegas on claims that the deck is stacked against him. “Its rigged,” he said, adding that his opponent should be disqualified. The candidate refused to commit to accepting the outcome of the election, saying: “I will keep you in suspense.”

Richard Haass, president of the Council on Foreign Relations, noted that a “defining feature of American democracy is legitimacy of vote & peaceful transfer of power”, and added that the “world will note that this is no longer a given”.

This is not a new line for Trump. He has consistently depicted the American political system – and its political elites – as irredeemably corrupt.

This is all straight from the populist playbook, in which charismatic politicians promise to protect “the people” from a “corrupt elite”. In his influential book on populism, which came out this August, the Princeton academic Jan-Werner Müller notes that: “Populists don’t just criticize the elites, they also claim that they, and only they, represent the true people”. That is why it is so difficult for populists to stomach electoral defeat. “The problem is never the populist’s imperfect capacity to represent the people’s will; rather, it’s always the institutions that somehow produce the wrong outcomes”, says Müller.

Compared to the Trump campaign, the Clinton camp has largely sought to position their candidate as a sensible, reasonable centrist. She flaunts her expertise and experience – positioned as preferable to the unpredictable, and unorthodox traits attributed to her opponent.

Americans have been presented with a choice between a “bore v boor”, Charlotte Alter and Philip Elliott wrote in their recent Time piece about how “Clinton plans to win through boredom”, which gives an account of how the Hillary campaign came to the conclusion that Americans liked “the nerdy technocrat” version of their candidate that was visible on stage for much of the debate. Many observers have put a positive spin on Clinton’s dry, technical demeanor – Politico dubbed her “Wonk Warrior”.

But it remains the case that the Clinton campaign’s strong technocratic appearance has left large swaths of the closely-divided American electorate alienated. The Trump campaign may well have established for future candidates from both parties that there is a substantial base to build on of anti-establishment sentiment that crosses party lines.

“Populism and technocracy increasingly appear as the two organizing poles of politics in contemporary Western democracies” according to Christopher Bickerton and Carlo Invernizzi-Accetti. They cite the success of populists – and the rise of unelected regulatory bodies – as “developments [that] challenge the pertinence of the ‘left/right’ distinction as the principal axis of political confrontation.”

This trend was on display in the US election as early as the primaries. Trump’s Republican opponents tried to discredit him by saying “But he’s not a true Republican” or “this man isn’t a Conservative”. The Conservative publication The National Review devoted an entire issue to proving Donald Trump wasn’t a true Conservative. These tactics proved woefully ineffective. Voters simply didn’t care. If anything, they liked that Trump wasn’t a card-carrying party man. They didn’t flock to Trump because he was a Republican or a Conservative. They flocked to him because he was a populist pitting himself against the establishment.

Trump, for his part, never hid his unease with the party machine. When the Republican leadership seemed to abandon Trump en masse following a damaging video leak, which appeared to show him bragging about groping women without their consent, his reaction was telling. “It is so nice that the shackles have been taken off me and I can now fight for America the way I want to," Trump wrote in a tweet. He called Paul Ryan a “very weak and ineffective leader.” Swinging at other critics within the party, he tweeted “Disloyal R’s” – Republicans – “are far more difficult than Crooked Hillary”.

This kind of internecine war has been one of the more remarkable features of this election. It led one commentator to ask: Who is Donald Trump fighting? Hillary Clinton or the Republican Party? But populists are never obedient to political parties. “Populists always want to cut out the middleman, so to speak, and rely as little as possible on complex party organizations or intermediaries between citizens and politicians”, writes Muller.

Her avowed centrism, and penchant for wonkiness - which was on display during the final debate - allows her to play the technocratic foil to Trump’s populism.

The emergence of a new axis of political confrontation in the United States – one between populists and technocrats – is in line with a trend observed in other parts of the world. In Europe, the opposition between populists and technocrats is particularly striking. There the European Union, seen largely as a technocratic, bureaucratic structure, finds itself pitted against rowdy populists seeking sovereignty in almost every member state. This has resulted in populist revolts in Britain, with the Brexit referendum, and populists coming to power in countries like Greece. The populist tide is also evident in other major European countries, like Italy, France, Spain and others.

In the US, trade deals like the Trans-Pacific Partnership and NAFTA, which featured heavily in the last debate, represent the kind of technocratic projects that populists of all political stripes are defining themselves in opposition to. Even central bankers are finding themselves in populist crosshairs. Consider Trump’s earlier lambasting of Janet Yellen, the Federal Reserve Chairwoman. He said she should be “ashamed of herself” for keeping interest rates low – a decision he views as political.

But if the Brexit referendum has taught us any lessons, it is that striving to adopt a “reasonable” stance is not always an effective way to disarm a populist opponent. Technical knowledge and expertise are now treated with suspicion by many voters. The pro-Brexit British politician Michael Gove infamously declared “people in this country have had enough of experts.” Trump echoes that sentiment. Like his fellow populists across the pond, Trump has said: “The experts are terrible. They say, ‘Donald Trump needs a foreign policy adviser.’ Supposing I didn’t have one … Would it be worse than what we’re doing now?" This kind of antipathy is likely to persist.

Of course, the populist rejection of expertise and reason is dangerous. And pointing this out has been a major line of attack for the Clinton campaign. In one of her campaign ads, a nuclear missile launch officer attacks Trump’s temperament, by saying: “The thought of Donald Trump with nuclear weapons scares me to death. It should scare everyone.” The narrator adds that “Self-control may be all that keeps these missiles from firing."

Yet, just as “Project Fear” did not work in the Brexit referendum, it is not a sure fire response to populism. Going into the final debate, polling analysts were pointing out that Trump’s falling polling numbers appeared to have found a floor of sorts in swing states, forestalling predictions of a down-ballot wipeout of Republicans, and suggesting the coalition of dissent may remain an appealing base for future populist campaigns from across the political spectrum.

This new axis of political confrontation could well endure.

For the sake of effective governance, ruling elites will want to shore up their legitimacy using more than simply competence – even if it is indeed a critical governing trait. When a presidential candidate from a major party is able to suggest that elections are rigged, this signals a profound disillusionment with the political system. An effective response to populism, then, must address the underlying causes of this crisis of legitimacy – and not simply rely on waving away one’s opponents as wildcards who can’t be trusted with the nuclear codes.