One Year After Khashoggi’s Killing, the Attack on Free Expression Rages On 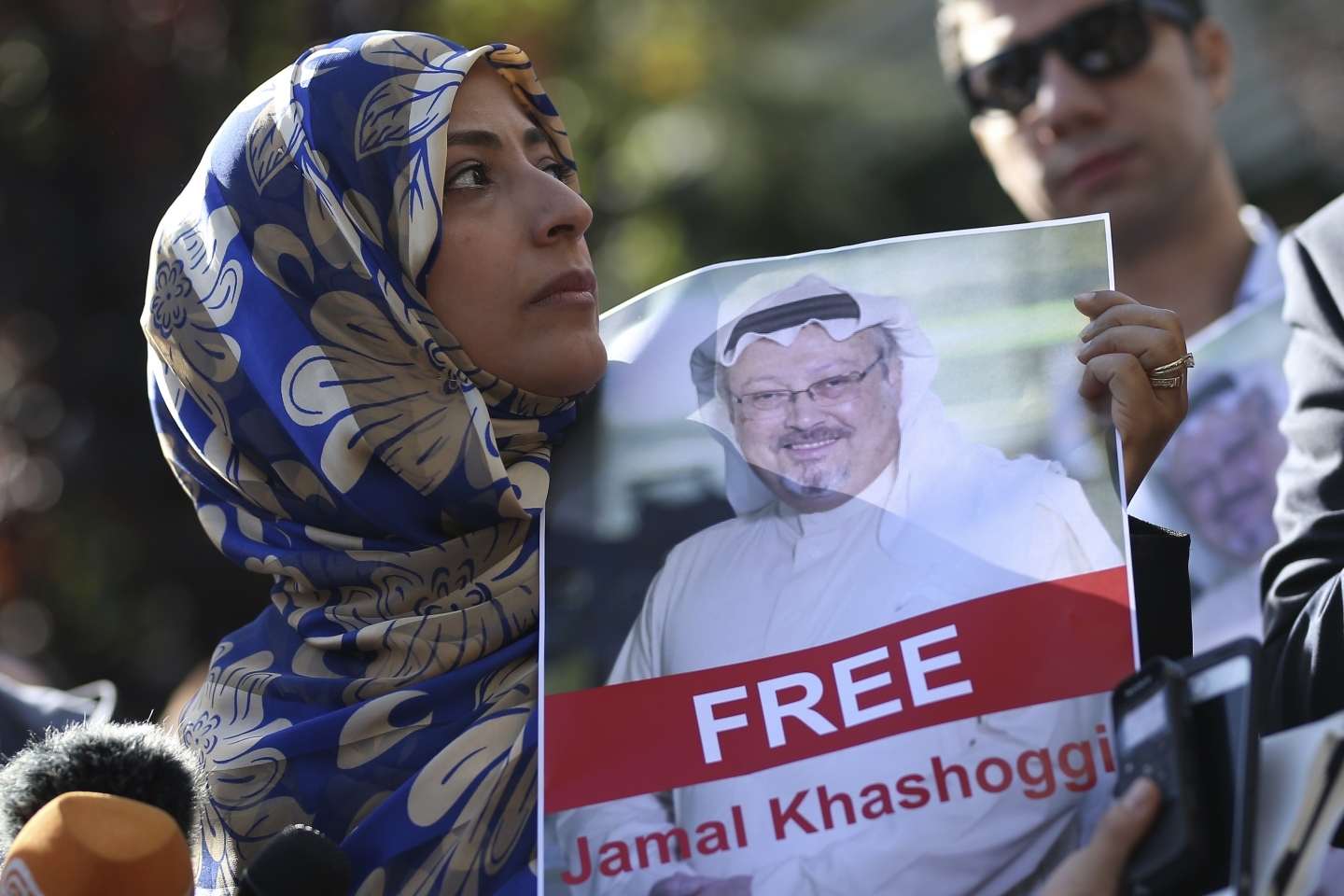 Tawakkol Karman, the Nobel Peace Prize laureate for 2011, holds a picture of Saudi writer Jamal Khashoggi as she speaks to journalists near the Saudi Arabia consulate, in Istanbul, Turkey. (AP Photo/Emrah Gurel, File)

The rise of the internet was supposed to bring us a golden age of freedom of expression. Online platforms were supposed to be a “marketplace of ideas” where everyone, from journalists and intellectuals to marginalized populations, could participate in public debate and work toward a more liberal and democratic world.

But the anniversary of Washington Post journalist Jamal Khashoggi’s killing is a reminder that many of the world’s populist leaders are not just turning back the clock on liberal democratic values, they are also getting away with repression and murder.

Under the de-facto rule of Crown Prince Mohammed Bin Salman, Saudi Arabia has made it harder for its citizens to express their ideas. Saudis were among the first adopters of online platforms to share and exchange their diverse views and they have one of the highest rates of social-media use per capita. However, slowly but surely, Saudis are being intimidated into acquiescence in support of the Crown Prince.

If the imprisonment of thousands of free-thinking individuals is not enough to silence people, knowing how Mr. Khashoggi’s brutal killing was orchestrated at the highest echelons of power with near global impunity have made Saudis think twice about expressing their views, online or anywhere else.

Mr. Khashoggi’s murder is not an aberration, but emblematic of how out-of-control populist leaders believe they have a licence to deal with domestic opposition as they please. Often calling the opposition terrorists or enemies of the state for their defiance to conform to their government’s doctrine, populists go to extremes to control the narrative.

In Kashmir, Mr. Modi has prevented independent journalists from entering the once-autonomous region and has shut off the internet and phone lines to its more than 12 million inhabitants. He has pulled television channels off the air. In a hyper-connected world, a complete communication blackout controls the reporting on the actions of the Indian military in Kashmir, while the world remains silent.

When thousands of people went to the streets on Sept. 20 this year to protest President Abdel Fattah el-Sisi’s purported corruption in Egypt, his forces rounded up nearly 2,000 journalists, activists, professors and lawyers for nothing more than having once criticized the leader’s policies. They were added to the already 60,000 political prisoners. Egypt’s media landscape, like that of any populist-led country, demands an all-out drool fest in celebration of its leader.

In Turkey, where Mr. Khashoggi was killed by Saudi state agents, President Recep Tayyip Erdogan says he is seeking justice for Mr. Khashoggi’s death, but yet he continues to jail more journalists than any other country in the world. Journalists have been harassed, attacked and killed in Turkey for expressing their views against Mr. Erdogan and in favour of liberal values, and his government has slowly shut down or taken over the entire Turkish media landscape.

In Vladimir Putin’s Russia, journalists that criticize the President or expose the corruption of his inner circle tend to go missing or die under mysterious circumstances. In Chechnya and the annexed region of Crimea, Mr. Putin’s Russia has implemented a near news blackout to prevent residents from speaking their minds.

China has never been a beacon for freedom of expression, but the situation is now far worse under President Xi Jinping. Mr. Xi has not only entwined his views into the official Communist Party platform, but his government imposes this dogma on religious minorities, state media and universities. Monitoring speech in China is peak Orwellian: Online activity is heavily monitored, peoples’ movement is surveilled and government agencies track citizens’ behaviour to determine their “social credit,” a euphemism for obedience. For nearly two million Uyghur Muslims put in internment camps to “re-educate” them about communism, it is cultural genocide at a mass scale. Protesters in Hong Kong know the fate of those who dare to express themselves under Mr. Xi and are protesting with all their might to stem a mainland takeover of their liberal city.

When the world was first introduced to online platforms, we neglected to consider how populist dictators would use the full force of state repression to control the narrative. From the Saudi playbook, worldwide authoritarians have learned that Mr. Khashoggi’s killers will not be held accountable, the world will eventually look away and repression of their citizens in the name of state security can stymie the thorniest calls for freedom of expression.

The article originally appeared in The Globe and Mail.