One casualty of any major economic crisis is that observers, if not policy makers, begin to fault the monetary regime in place. So it is with inflation targeting (IT). One of the latest examples of this phenomenon is the recent article by Martin Wolf whose title claims that the regime that aims to maintain price stability has “failed.” He then goes on to argue that his change of mind is due to the failure of IT to be equated with economic stability.

It is true that ‘standard’ macroeconomic analysis, still taught in most schools, associates price stability with economic stability. However, IT was never meant to prevent structural breaks of the kind we are going through. I cannot recall any central banker or policy maker arguing that price stability is associated with the end of business cycles or that major shifts in the economy, whether induced by technical change or some other major economic shift, could be prevented by the mere adoption of an inflation objective.

A more serious objection to the existing policy regime is that it ignored the possibility that price stability was enough to ensure financial system stability. Interestingly, Wolf ignores the contribution that turmoil in the financial system, especially the consequences of poor regulation and supervision, had in precipitating poor economic performance in most advanced economies.

Even if the IT regime is under threat what seems to be missing is a serious discussion of any sensible alternative. Nominal GDP targeting (NGDP) was briefly in fashion and, while it is still under discussion, its most important drawback is an almost complete absence of transparency. Transparency is precisely what has made IT so popular (and successful) around the world. We may disagree about the precise inflation rate, complain about the degree to which price indices have their flaws, but we all understand that the loss of purchasing power threatens our living standards. In the case of NGDP targeting there is considerable room to manoeuvre in how acceptable inflation versus real GDP growth rates might look, This also dilutes any accountability for poor performance.

Pundits often refer to IT as if the regime operates in the same fashion in every country where it has been adopted or is so blunt a goal that any deviation from the agreed upon inflation objective requires an immediate response in the form of an interest rate response (pre-crisis) or by invoking some macro-prudential instrument (post-crisis). Nothing can be further from the truth. In a 2010 article I point out in some detail not only that IT differs in the manner in which it is applied in advanced economies, there is even greater diversity in the meaning of IT in emerging markets. Nevertheless, this has not prevented some prominent economists, such as Nobel laureate Joseph Stiglitz, from complaining that IT is a failure. Of course, Stiglitz and others who blame IT for many of our ills are usually careful to refer to ‘strict’ forms of IT whereby deviations from a numerical objective are never tolerated. Unfortunately, I know of no such form of IT that has ever been put into place. Strict IT is a straw man. There are more speeches by central bankers than I can count that are careful to stress that IT is flexible. A mere look at Canada’s inflation record (see graph below) puts down any notion that the Bank of Canada has been anything resembling a ‘strict’ IT. 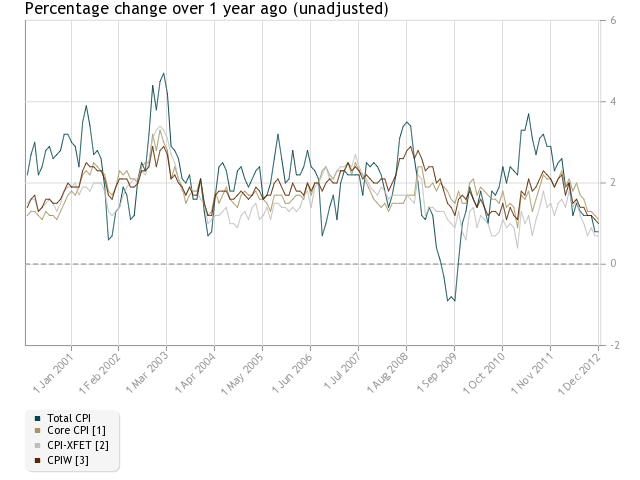 Source: http://www.bankofcanada.ca/rates/price-indexes/cpi/. Follow the link for explanations of the series plotted in the figure. Essentially, they are different measures of inflation with “Total CPI” the inflation rate the Bank targets. The IT in Canada is 2%.

Pundits and other observers also appear to forget that, in the not too distant past, we had the worst of both worlds, namely a sluggish economy and high inflation. The combination was known as ‘stagflation.’ Are they suggesting that those were better days? I certainly hope not and I, for one, would prefer not to see my financial wealth melt away due to politicians; adopting a policy of taxation without representation.

The graph below shows world inflation and real GDP growth. There is no obvious connection between higher inflation and better overall economic performance. Indeed, the simple correlation is small (and statistically insignificant) but negative. The loss of purchasing power suffered through the high inflation years of the 1980s and the early 1990s are, however, permanent. 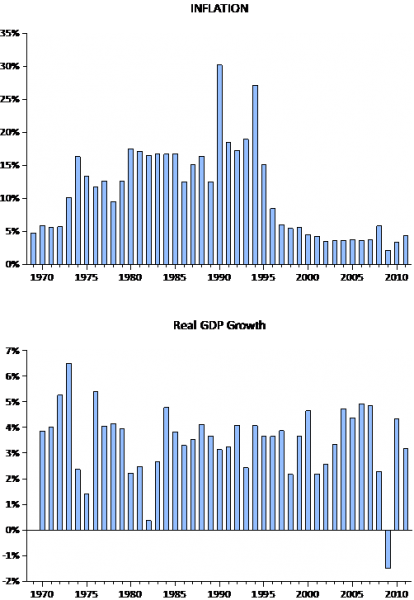 What events in the UK suggest — and this is the primary concern of Wolf’s article — is that the problem is not IT per se but the manner in which it is implemented. The Bank of England has, for years, offered inflation forecasts that always promised that the inflation goal would be met in approximately two year’s time, supported by the ‘threat’ that interest rates would be changed to ensure that the Bank’s objective would be met. To make matters worse, the Governor of the Bank of England had to write a letter to the Chancellor of the Exchequer each time the observed inflation rate missed the target. As this occurs on a monthly basis and, since the crisis erupted, these letters, and the implied promise that inflation would return to target, have been published on a regular basis. Not only was there an inconsistency between the notion that an IT is a medium-term objective, and not one that can be achieved on a monthly basis, but the Bank of England failed to explain to the public that, in crisis times, the inflation objective may have to take a back seat to other concerns (e.g., economic and financial stability). The problem then is not the regime but how it is practiced.

To be sure there are important questions regarding how regimes such as IT need to adapt to crisis times or to a state of affairs that produces historically low interest rates. Improving any existing policy regime should always be on the agenda. But to jump to the conclusion that IT is a failure represents a giant leap, especially when there are no credible alternatives. Those who advocate IT’s abandonment are being intellectually dishonest. If they truly want a replacement then they had better explain how some alternative would produce more desirable economic outcomes.