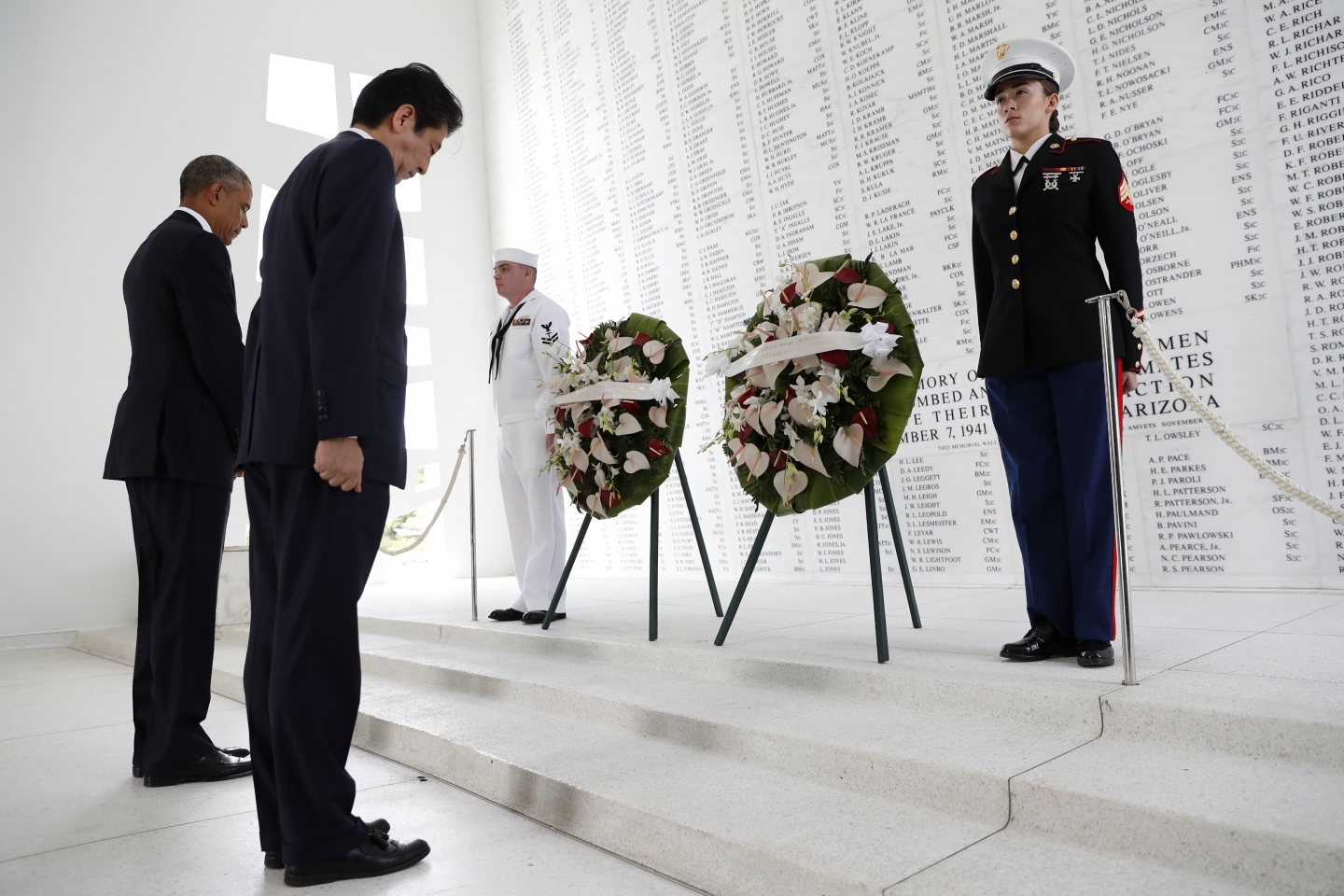 This past week, Japanese Prime Minister Shinzo Abe met with U.S. President Barack Obama in Pearl Harbor, where he offered words of condolence and remorse for his country’s sneak attack on U.S. military forces there on December 7, 1941—“a day that will live in infamy,” as President Franklyn D. Roosevelt said at the time—and reaffirmed his country’s commitment to a peaceful world order.

Commentators worldwide have remarked on Abe’s visit as a milestone on the road to reconciliation between former enemies who fought some of the deadliest and most brutal battles in history.

This interpretation is incorrect. The United States and Japan reconciled many years ago. Exactly when is a matter of interpretation, but the last time anyone seriously mooted the possibility that the two countries might again become enemies was in 1991, when George Friedman published his widely-panned book, The Coming War with Japan. At that time, Japan was at the height of its economic boom: Japanese companies were world leaders in automobiles, electronics, and much else; Japanese corporations and investors flush with cash were snapping up symbolic U.S. assets such as Rockefeller Center and MCA/Universal; and the real estate value of the Imperial Palace grounds in Tokyo alone theoretically equalled that of the entire state of California. A few who knew nothing about Japan or about U.S.-Japanese relations could not resist the temptation to sound a false alarm.

Friedman convinced no one precisely because one does well when friends with whom one’s own economy is tightly coupled also do well. And by the 1990s the United States and Japan had indeed become friends. Since then, the bonds of friendship have grown even stronger.

Today, Japan and the United States are members of what political scientists call a “security community,” a group of states in whose relations the threat of force plays absolutely no role whatsoever because it has become genuinely unthinkable. Members of security communities still have disputes—think of the endless disputes between the United States and Canada over softwood lumber, for example—but they need not and do not fear that these disputes will be resolved at gunpoint.

What makes security communities so robust is trust, a special kind of confidence grounded in the knowledge that another wishes you well and means you no harm. Trust can be misplaced, of course, which is why betrayal is so shocking. But while individual people often trust too easily, states rarely do. International politics has not, historically, been a trusting realm. So when security communities form, you can be sure that they rest on sound foundations. No two members of a security community have ever gone to war.

There is no well-founded trust in the absence of empathy. By empathy I mean simply the capacity to see the world from another’s perspective. One cannot be sure that another will do you no harm unless you can put yourself in the other’s shoes and see yourself through his or her eyes. Japan and the United States have had decades of intense interaction to cultivate empathy. It was in short supply, of course, immediately after World War II, when Japanese and American citizens still clung to racialized images of a demonized “other.” But the ice began to thaw during the U.S. occupation, when Japanese could see firsthand that Americans could be generous and well-meaning and began to internalize the view that their true enemies had been the militarist adventurers who had dragged their country into war in the first place.

The 1960s and 1970s were a time of trial for U.S.-Japanese relations, largely owing to the Vietnam War, which the by now largely pacifist Japanese public strongly opposed. America’s tendency to patronize was a constant irritant as well, as was the heavy U.S. military footprint (still widely resented in Okinawa). But Japan’s economic success, its increasing and constructive global role, rapidly intensifying people-to-people interaction, and the rise of Japanese popular culture proved to be great levelers, dissipating mutual misconceptions and encouraging the development of a common identity. Fifty years ago it would have been unthinkable that in a major Hollywood release the Japanese navy would heroically rescue an imperilled American ship, or that only a deep bond between a Japanese woman and two American men would suffice to save the world. But these were precisely the central plot elements of both Battleship (2012) and Pacific Rim (2013).

While Abe’s visit to Pearl Harbor tells us nothing new about U.S.-Japan relations, it does drive home the lesson that even brutal adversaries can overcome the most intense hostility imaginable and forge lasting bonds of friendship and cooperation. Like Obama’s visit to Hiroshima last spring, Abe’s visit last week reminds us of what is possible when former enemies reflect with mutual sadness on an unhappy past and use it as a basis for a shared resolve to work for a better future.

Let us hope the point is not entirely lost on others.

"even brutal adversaries can overcome the most intense hostility imaginable and forge lasting bonds of friendship and cooperation"
The opinions expressed in this article/multimedia are those of the author(s) and do not necessarily reflect the views of CIGI or its Board of Directors.