Report on the G8 Global Partnership 2010 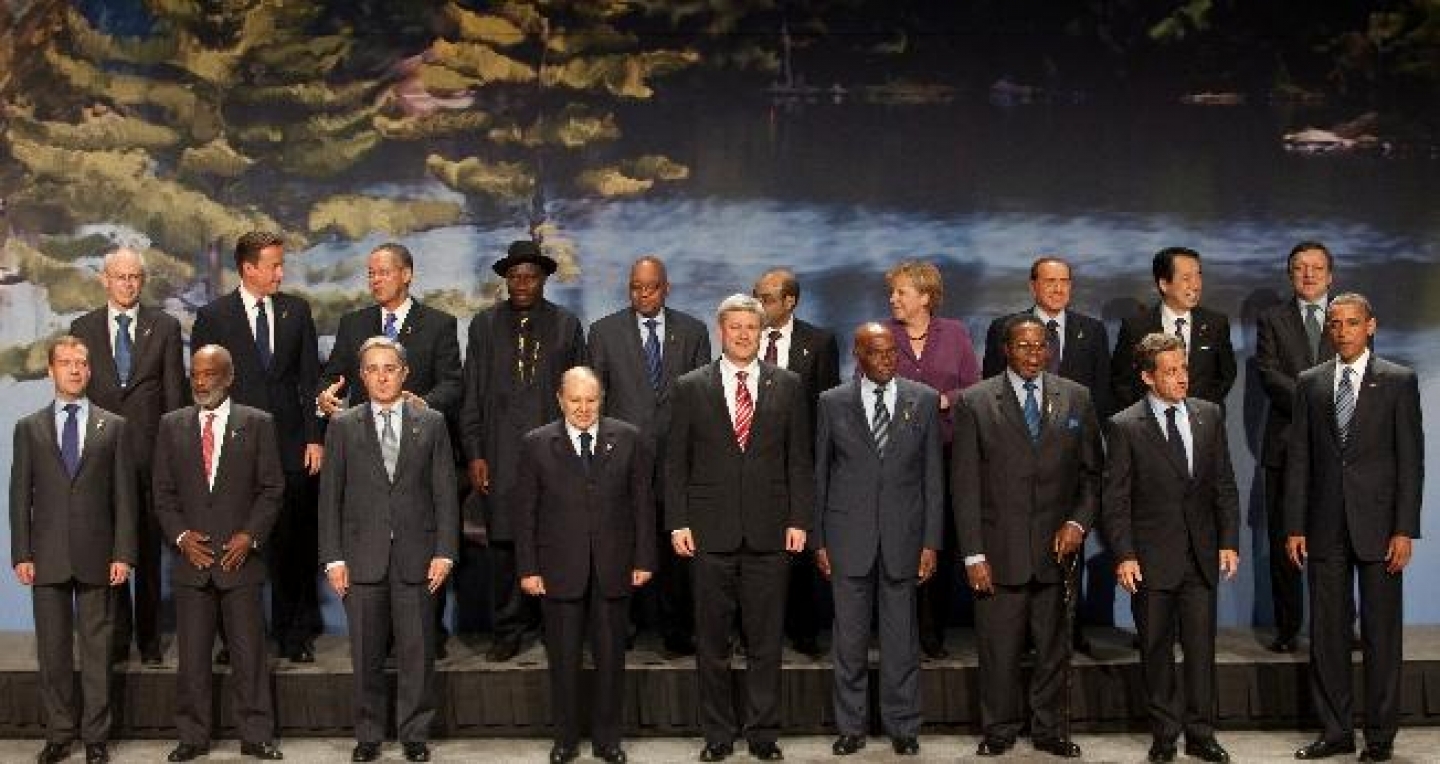 2. Since 2002, partners have achieved progress and continue efforts in all areas identified among the Leaders’ priorities at Kananaskis including: “the destruction of chemical weapons”, “the dismantlement of decommissioned nuclear submarines”, “the disposition of fissile materials”, and “the redirection of former weapons scientists”. In accordance with the Kananaskis principles, efforts are also being made in other areas, including the physical protection of nuclear and radiological materials, combating illicit trafficking, improving export controls, and biological security.

3. Despite past progress, work remains in order to complete projects in the Russian priority areas of chemical weapons destruction and nuclear submarine dismantlement prior to the end of the Partnership’s current mandate in 2012. We reaffirm our commitment to complete priority projects in Russia and Ukraine.

4. Building upon the decision taken by G-8 Leaders in 2008 during the Toyako Summit, we continue to recognize the need for Global Partnership programming to address WMD proliferation and terrorism and related challenges worldwide. In particular, several partners in their national programs are already implementing nuclear and radiological security, biological security, and scientist engagement projects in several regions of the world. We commit to continuing the implementation of the Partnership’s geographic expansion, in accordance with the Kananaskis Principles and Guidelines, to address global WMD vulnerabilities. New members accepting Kananaskis documents can be included on a case-by-case basis in the expanded Global Partnership. With respect to nuclear security in particular, we will work to implement commitments as outlined in the Nuclear Security Summit Work Plan.

Project Implementation in Russia and Ukraine

5. Through the Global Partnership, members have funded the construction of chemical weapons destruction facilities in Russia to assist in the elimination of Russian chemical weapons stockpiles, pursuant to Russia’s obligations under the Chemical Weapons Convention (CWC). Significant progress has been made since 2002 as a result of funding from Russia and other GP partners. As of December 2009, 45% of Russia’s chemical weapons stockpile (18 000 tonnes) has been destroyed. The destruction process at several facilities, the majority built with the assistance of GP funding, is ongoing.

6. Chemical weapons destruction has been completed both at the Gorny facility built with funding from the European Union, Finland, Germany, and the Netherlands as well as the Kambarka facility built with funding from the European Union, Germany, Finland, the Netherlands, Sweden, and Switzerland. The chemical weapons destruction facility at Shchuch’ye, built with funding from Belgium, Canada, the Czech Republic, the European Union, Finland, France, Ireland, Italy, the Netherlands, New Zealand, Norway, Switzerland, Sweden, the United Kingdom, and the United States, began destruction operations in March 2009. This facility remains the best example of the effective cooperation among several countries made possible through the G-8 Global Partnership. Facilities at Maradykovsky and Leonidovka (funded primarily by Russia with assistance from Switzerland) are also operational.

7. The destruction facility at Pochep (with assistance from Germany and Switzerland) is expected to begin operations in 2010 while the Kizner facility (with assistance from Canada) will begin operations by the end of 2010. The contributions of Global Partnership members remain important to helping Russia to complete the destruction of its chemical weapons stockpiles in accordance with Russia’s CWC obligations.

8. Since 2002, substantial progress has been achieved in dismantling decommissioned submarines withdrawn from the Russian Navy at various sites across Northwest Russia and the Russian Far East. Russia has provided significant funding for these projects and has been supported by contributions from Australia, Canada, the European Union, France, Germany, Italy, Japan, New Zealand, Norway, the Republic of Korea, Sweden, the United Kingdom, and the United States.

10. Partners are also completing essential related activities including radioactive waste (RW) management and spent nuclear fuel (SNF) management, transportation, and the rehabilitation of former on-shore technical bases. A long-term storage facility for submarine reactor compartments and radiation hazardous parts is now operational at Sayda Bay, with German funding; as well, the construction of a regional center for processing and long-term storage of RW is now underway. Progress is also ongoing for design of a solid and liquid RW management facility and a SNF management facility at Andreeva Bay with funding from Italy, Norway, Sweden, and the United Kingdom. The construction of the first units started in 2008 and the completion of the SNF facility is scheduled for 2013 and the RW management facility for 2015.

11. Funding from France has supported a site rehabilitation program at the former Gremikha naval base, including work for SNF removal, and improvement of infrastructure of final destination sites, in order to assure safe and secure storage and treatment. France is also supporting upgrades to a nuclear waste incinerator at the Zvezdochka shipyard. Italy is providing funding for the construction of a multi-purpose naval vessel for the transportation of SNF and conditioned waste. Japan has begun the process for providing equipment for a long-term storage facility for reactor compartments, where actual delivery at Razboynik Bay is expected to take place later and Canada and Italy are funding physical protection, as well as environmental and equipment improvements at the Nerpa and Zvezdochka shipyards.

12. The Northern Dimension Environmental Partnership (NDEP) “Nuclear Window”, managed by the European Bank for Reconstruction and Development (EBRD), which includes funding from a number of Global Partnership members, is financing a number of multilateral nuclear projects concerning the sites at Andreeva Bay and Gremikha, as well as SNF unloading from the Lepse vessel. A Strategic Master Plan for all nuclear-related activities in the Northwest of Russia has also been prepared under the NDEP “Nuclear Window. In the Archangelsk region, the construction of an emergency response system similar to the one that was installed and put into operation in Murmansk region, is now underway.

13. On April 13, 2010, the United States and Russia signed a Protocol amending the 2000 Plutonium Management and Disposition Agreement in which each country commits to dispose no less than 34 metric tons of surplus weapons-grade plutonium – enough in total for 17,000 nuclear warheads.

14. A number of projects are being implemented in Russia to upgrade the physical protection and accounting systems of nuclear materials. Funding for this programming is being provided by Canada, the European Union, Germany, Italy, Norway, Sweden, the Republic of Korea, the United Kingdom, and the United States.

15. Projects aimed at strengthening nuclear security are also underway in Ukraine with support from Canada, France, the United Kingdom, the United States, and Sweden. Japan is moving forward with the rehabilitation and provision of equipment for the “Kharkov Institute of Physics and Technology”, while Germany is funding projects for the physical protection of radioactive sources. GP partners also continue to coordinate efforts to assist Ukraine in converting the Chernobyl site into a stable and environmentally-safe condition, including the construction of a shelter for the damaged reactor and storage for spent nuclear fuel. The United Kingdom and the European Union are funding the design and construction of a centralized, long-term storage facility for highly radioactive sources within the Chernobyl Exclusion Zone, and Finland, France, Germany, Sweden, United States are providing assets needed to package and transport these sources to the facility once it is complete. France is involved in recovery of highly radioactive sources on the Ukrainian operator RADON sites for their shipment to the future centralized store.

16. The recovery of several hundred highly radioactive Radioisotopic Thermoelectric Generators (RTGs) from the Northern Sea Route, the Baltic Sea, and the Russian Far East has made significant progress and continues with support from Canada, Finland, France, Norway, and the United States.

17. The United States and Russia are partnering to place equipment for radiation detection at border crossings to detect and prevent the illicit cross-border trafficking of nuclear and radiological materials. GP partners are working with Ukraine, with funding provided by Canada, the European Union, New Zealand, the Republic of Korea, Sweden and the United States to help strengthen its capacity to prevent and detect nuclear smuggling.

18. Some partners are already undertaking activities to implement the Work Plan of the Nuclear Security Summit.

19. Building on the Recommendations for a Coordinated Approach in the Field of Global WMD Knowledge Proliferation and Scientist Engagement, as agreed to by the Global Partnership Working Group (GPWG) during Italy’s 2009 G-8 Presidency, GP partners continue to address the human dimension of proliferation by funding projects to engage former WMD scientists or scientists with WMD-related expertise in the development of sustainable civilian research and other activities.

Geographic Expansion of the Global Partnership

21. The proliferation and terrorist acquisition and use of weapons and materials of mass destruction are global security challenges. In 2008, G-8 Leaders agreed that the Global Partnership must evolve to address these challenges by implementing projects worldwide on the basis of the Kananaskis principles and guidelines.

22. To date, in their national programs, several GP partners including Canada, the European Union, Finland, Italy, Japan, New Zealand, Norway, the Republic of Korea, Sweden, the United Kingdom, and the United States, as confirmed by the projects listed in Annex A to this Report, are pursuing WMD threat reduction projects, related to nuclear and radiological security, biological security and non-proliferation, and scientist engagement in several regions of the world including Central Asia, Southeast Asia, Africa, the Middle East and the Americas. These projects reflect the resolve of partners to address evolving WMD challenges through the Global Partnership while continuing work toward completion of priority projects in Russia and Ukraine.

23. In light of the ongoing global scope of WMD threats, G-8 members continue to implement the Global Partnership’s geographic expansion as a means to address WMD challenges effectively worldwide. While working to complete chemical weapons destruction and nuclear submarine dismantlement projects in Russia, GP partners recognize nuclear security, biological security, and scientist engagement programming as important areas of cooperation to be addressed in other regions of the world. Partners also will continue to provide accurate information regarding the scope of their global activities, included in the attached Annex.

24. In support of the GP’s geographic expansion, Partners welcome ongoing cooperation with the International Atomic Energy Agency (IAEA), the Organization for the Prohibition of Chemical Weapons, and the States Parties to the Biological and Toxin Weapons Convention in the exchange of information and expertise. The IAEA Safeguards Agreement and Additional Protocol, UN Security Council Resolution 1540, and the Global Initiative to Combat Nuclear Terrorism are all important mechanisms which will help with concrete programming of Partnership members.

25. An expansion of the membership of the Global Partnership as a means to facilitate global programming remains a priority. Interested G-8 partners have communicated with specific countries, as discussed by the Global Partnership Working Group, to gauge their interests in joining the Global Partnership. The GPWG will also continue to coordinate efforts to engage with additional potential new participants. According to the decision taken in 2008 in Toyako and reaffirmed in 2009 in L’Aquila, new members accepting Kananaskis principles and guidelines can be included on a case-by-case basis in the expanded GP.