In the absence of world government with single political, fiscal and monetary institutions, throughout history global governance has been enforced by a dominant power (think: Pax Romana, Pax Britannica, Pax Americana) or shared between competing powers with respective spheres of influence. That position of authority provided certain advantages — access to markets, say, under the British Empire, or the "exorbitant privilege" accorded to the U.S. dollar under the Bretton Woods system. Such benefits can be viewed as compensation for the costs of providing global public goods: freedom of navigation and enforcement of the gold standard under Pax Britannica; international financial stability in the post-war Pax Americana.

Consider the euro zone as a closed system. Like the global economy of the late 19th century, it has a quasi-gold standard, in the form of monetary union, free trade and (some degree) of labour mobility between members. It also has a natural hegemon — Germany —that has, arguably, benefited from these arrangements.

But the euro zone has not worked as well for others of late. And, in contrast to the functioning of the gold standard of the late 19th century, in which the Bank of England acted as lender of last resort to support global capital flows and promote stability, Germany has been less than entirely supportive of efforts by the ECB to ensure stability. At the same time that it has rebuffed the suggestion of a fiscal union, reflecting atavistic aversion to inflation, Germany has blocked more aggressive efforts to promote growth. Adjustment in the euro zone, it has argued, must come through internal devaluation.

The problem with this outcome is that deflation is associated with a rising debt burden.

Well, although the nominal or face value of debt is fixed, the real value of debt (or debt in terms of purchasing power) increases with deflation. In the 1930s, Irving Fisher identified this "debt deflation" effect as a factor behind global stagnation. Recent euro zone experience provides additional data points for Fisher’s theory.

Sustained unemployment is required, meanwhile, in order to put downward pressure on wages to get the deflation that is required to facilitate adjustment. In this environment, economic performance in the euro zone has been dreadful: output remains below the pre-crisis level, while unemployment in some countries of the periphery is at Great Depression levels. As Paul De Grauwe explains, here, this is not a European-wide problem — the ten non-euro EU members have done rather better than both the euro zone and the U.S. (see chart). To some extent, this may reflect conditional convergence, in that they are starting at a lower level of GDP per capita and can grow at a faster rate. It is clear, however, that there is a problem in euro zone. And, as De Grauwe notes, all of this is sadly reminiscent of the 1930s. 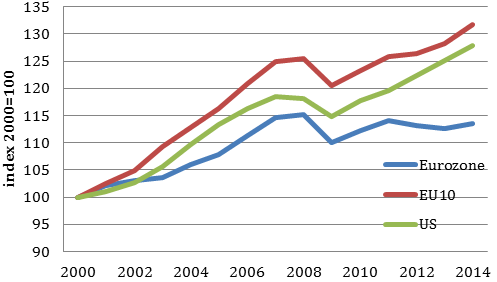 The problem then was, in part, the inability of the Bank of England to provide the public good of international financial stability, as the U.K. was by that point a financially and fiscally impaired hegemon.  As the largest economy in the euro zone, Germany clearly has a leadership role. It does not suffer the financial or fiscal challenges that constrained the U.K. in the late 1920s and early 1930s. So, the question is: has Germany been the guardian of fiscal rectitude and discipline, or a selfish Hegemon?