Should We Fear Inflation?

I had the privilege of attending the recent Institute for New Economic Thinking (INET) conference in Berlin which was also co-sponsored by CIGI. There was considerable discussion about the continuing crisis in the euro zone, and the suitability of dealing with mounting debt problems through fiscal austerity. Being a specialist in monetary policy I was intrigued by the following statement made by Angel Gurría, Secretary-General, Organization for Economic Co-operation and Development (OECD), in a session entitled “Debt: Inflation and Austerity”, who stated : “I don’t lose a lot of sleep about inflation so, please, if any of you stumble on the way to growth don’t let the fears of inflation stand in the way…” (his presentation is available at http://ineteconomics.org/conference/berlin/angel-gurr-debt-inflation-and-austerity-35).

Such a comment, coming from an influential policy maker, seems to go against the views of most central bankers as well as a considerable number of academics, who would argue that the best way to achieve steady growth is through price stability. The endless discussion over the debt problems in Europe and elsewhere centre around ways to stimulate economic growth while addressing the problem of rising debt to GDP ratios through restrictive fiscal policies. A few economists, such as Paul Krugman and Ken Rogoff (see, for example, his December 2008 interview in The Guardian), have suggested that a little more inflation might also help alleviate some debt related problems. Obviously, inflation is one way to reduce the real burden of debt. Nevertheless, none of the ‘inflationists’ are prepared to deal with the problem whether a moderately high inflation can eventually be reduced to more acceptable levels in a timely or credible manner once the debt burden has been lifted. Also relevant, however, is the all too important question about whether inflation can actually harm growth.

The record of world inflation since the late 1960s, shown in the Figure below, suggests that inflation can be persistently high or low for a considerable period of time. The figure also reveals that inflation over the past decade has been remarkably low. Indeed, one can approximately distinguish three phases in inflation during the period shown. These are highlighted by the three horizontal lines. The first phase ends around 1988 and an inflation of approximately 10% describes fairly the inflationary experience of this period. Next, over a period of roughly a decade stretching from 1989 to 1999, inflation appears to rise to around 15%, and this represents a sharp increase over the earlier period (the two oil price shocks take place in the first era considered). Finally, the period since 2000 is remarkable for at least two reasons. First, inflation around the world falls to around 4%. 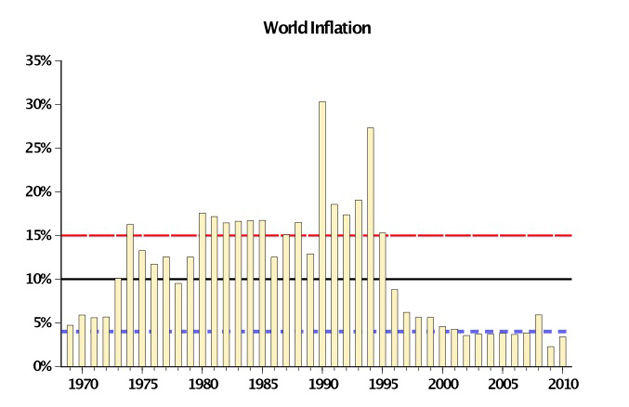 Second, as revealed in the next figure, the reduction and moderation inflation in truly a worldwide phenomenon. In China, and other countries in Asia that have experienced strong economic growth, inflation is practically as low as in the so-called ‘advanced’ world. Only Japan appears to be a little apart from the rest because it has experienced several years of deflation. 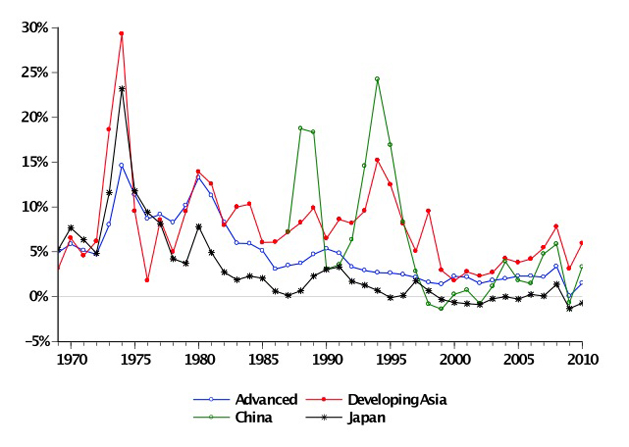 The statement by Mr. Gurría suggests perhaps that one should not worry about sacrificing economic growth on the altar of low and stable inflation. However, such statements must also confront a large body of empirical evidence that asks: what is the link between inflation and economic growth?

The next figure, also for the world as a whole, shows the relationship between inflation and real GDP growth in each of the three phases identified earlier. Only when inflation is moderate is there are a positive relationship between inflation and economic growth. If the same exercise is repeated for the US, China, and even Japan, the positive relationship holds. Note also that inflation is actually harmful to growth in the first phase when inflation rates remained high, and persistently so, for about two decades. The ellipses shown essentially confirm the statistical validity of this conclusion. As we shall see, however, one has to be cautious in reaching strong policy implications. Nevertheless, one result does seem to stand up to considerable scrutiny, namely that there appears to be a threshold beyond which inflation is harmful. The disagreement is over where threshold lies.

While interest in this topic naturally peaked when inflation was last seen to threaten economic growth, back in the 1990s, leading to the establishment of the current orthodoxy recommending the desirability of low inflation, recent events are likely to spur renewed interest in this topic. What do we know? Unfortunately, a few things but very little that is definite. Back in 2000, Jonathan Temple, now at Bristol University, wrote a literature survey on this question and concluded as follows: “…, any case for price stability which relies on a positive growth effect should continue to be regarded with considerable skepticism.” Yet, more interestingly, he also commented that “[P]erhaps the most fruitful area for more work will be the interaction of inflation and the financial sector.” Subsequent work along these lines appeared to conclude that there was a strong negative correlation between inflation and financial market performance. This line of research is a few years old and the continued low inflation combined with poor financial performance, at least in the advanced economies, creates at the very least some new doubts about the role of the financial sector in explaining the nexus between inflation and economic growth. More importantly, comments such as those made by the OECD’s Secretary-General suggests that, along with a host of other issues, better explanations of what links exist, at the macroeconomic level, between inflation and growth, and the role played by the financial sector, need rethinking. Equally important, and the INET conference also raised the issue at length, is the need for clarity concerning the impact of changes in the fiscal stance on the relationship between inflation and economic growth. Currently, a wide gulf exists between those who advocate austerity as a means to help an economy return to growth, and those who argue that fiscal retrenchment must come later, once a weak world economy recovers more strongly.

The task is not an easy one, and not only because the necessary theories are insufficiently developed. The empirical link between inflation and growth is, as shown long ago by Ross Levine and David Renelt, in an article in a 1992 article in the American Economic Review, exceedingly fragile, that is, it can change with slight changes in the specification used. What is needed are better ‘stories’ about the transmission between inflation and economic growth and ones that can stand up to empirical scrutiny.

While perhaps one need not fear inflation in the current environment it is far from evident that benign neglect of the consequences of inflation will prevent a recurrence of the negative effects of inflation on growth that took place not so long ago.