Smith, Krugman, Kant and the Fight for the Soul of Europe

Discussions between the Greek Government and its EU creditors collapsed on Monday. That shouldn't be terribly surprising however. As predicted, here, the debt negotiations are likely to be a messy and turbulent affair.

What I do find interesting, encouraging and slightly surprising is the extent to which Greece’s Finance Minister, Yanis Varoufakis, has defined the issues in terms that Adam Smith would appreciate. Smith, remember, argued in his magisterial work The Wealth of Nations:

In a remarkably lucid piece in the New York Times, Varoufakis makes much the same point on behalf of the new Greek government. “We shall desist,” he explains, “whatever the consequences, from deals that are wrong for Greece and wrong for Europe. The ‘extend and pretend’ game that began after Greece’s public debt became unserviceable in 2010 will end. No more loans — not until we have a credible plan for growing the economy in order to repay those loans […].”

That strikes me as a fairly clear “open and avowed bankruptcy.”

Of course, the concept of bankruptcy is more problematic with respect to a sovereign than in the case of a private firm. A firm is forced into bankruptcy if it fails to meet its obligations as they come due. In that event, a bankruptcy court appoints a trustee who undertakes an orderly disposition of assets in the interests of all claimants.[1] This definition based on a sequential-debt-service constraint doesn't apply, however, in the sovereign context — a sovereign that doesn't pay typically can’t be forced to pay. (As the holdouts’ case against Argentina makes clear, getting judgement is one thing; collecting on that judgement is something entirely different). Moreover, in the world of imperfect and asymmetric information in which bonds are bought and sold, there are genuine differences of opinion over the debt-servicing capacity of distressed states over the maturity of long-term bonds.

As a result, even “open and avowed” bankruptcies are subject to dispute. The Finance Minister — a former professor of game theory, no less — was adamant that he wasn't positioning for advantage in a debt negotiation strategy. But, Varoufakis’ protestations to the contrary notwithstanding, both sides are engaged in a negotiating game. Even if his “read my lips” statement is not a bluff, he knows that the sooner he can get the EU to come to terms (if he can) the better it will be for Greece. In short, he has an incentive to convince his counterparties that he is truly prepared to make his way to the "Grexit." That would be painful and disruptive, yes, but perhaps not as painful as sticking with the program.

He may have a point.

As he is wont to do, Paul Krugman has looked at the numbers, here, and calculated the cost of adhering to the terms of the EU-IMF-ECB troika "bail out." Using reasonable assumptions, he estimates that the Greek government would need the equivalent of six percentage points of GDP in spending cuts or tax hikes to meet the requirements of the troika’s program. Meeting that target wouldn't be that onerous, perhaps, if Greek output had performed as assumed in the program. But, as Krugman’s chart (below) reveals, the actual path of output has been, well... not entirely as planned. 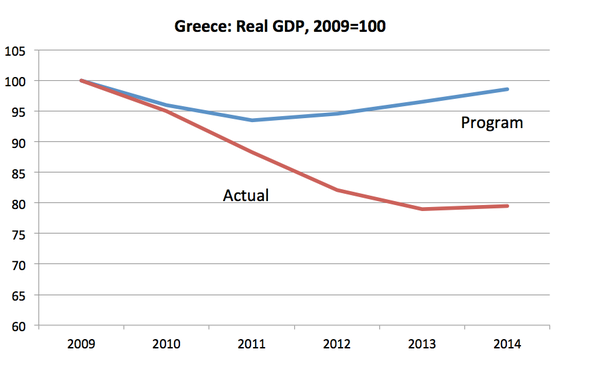 So, in a sense, there is a basic issue of "fairness." What can be equitably asked of Greek taxpayers? Let’s turn the microphone over to Yanis Varoufakis:

The major influence here is Immanuel Kant, the German philosopher who taught us that the rational and the free escape the empire of expediency by doing what is right.

How do we know that our modest policy agenda, which constitutes our red line, is right in Kant’s terms? We know by looking into the eyes of the hungry in the streets of our cities or contemplating our stressed middle class, or considering the interests of hard-working people in every European village and city within our monetary union. After all, Europe will only regain its soul when it regains the people’s trust by putting their interests center-stage.”

[1] It is interesting to note that in some European jurisdictions — including Germany — the definition of claimants includes stakeholders, such as pensioners who, while not considered “creditors” as such, seem to have more rights in bankruptcy proceedings than in North America or Japan.