Space for Civil Society within the G20 Summit Process? 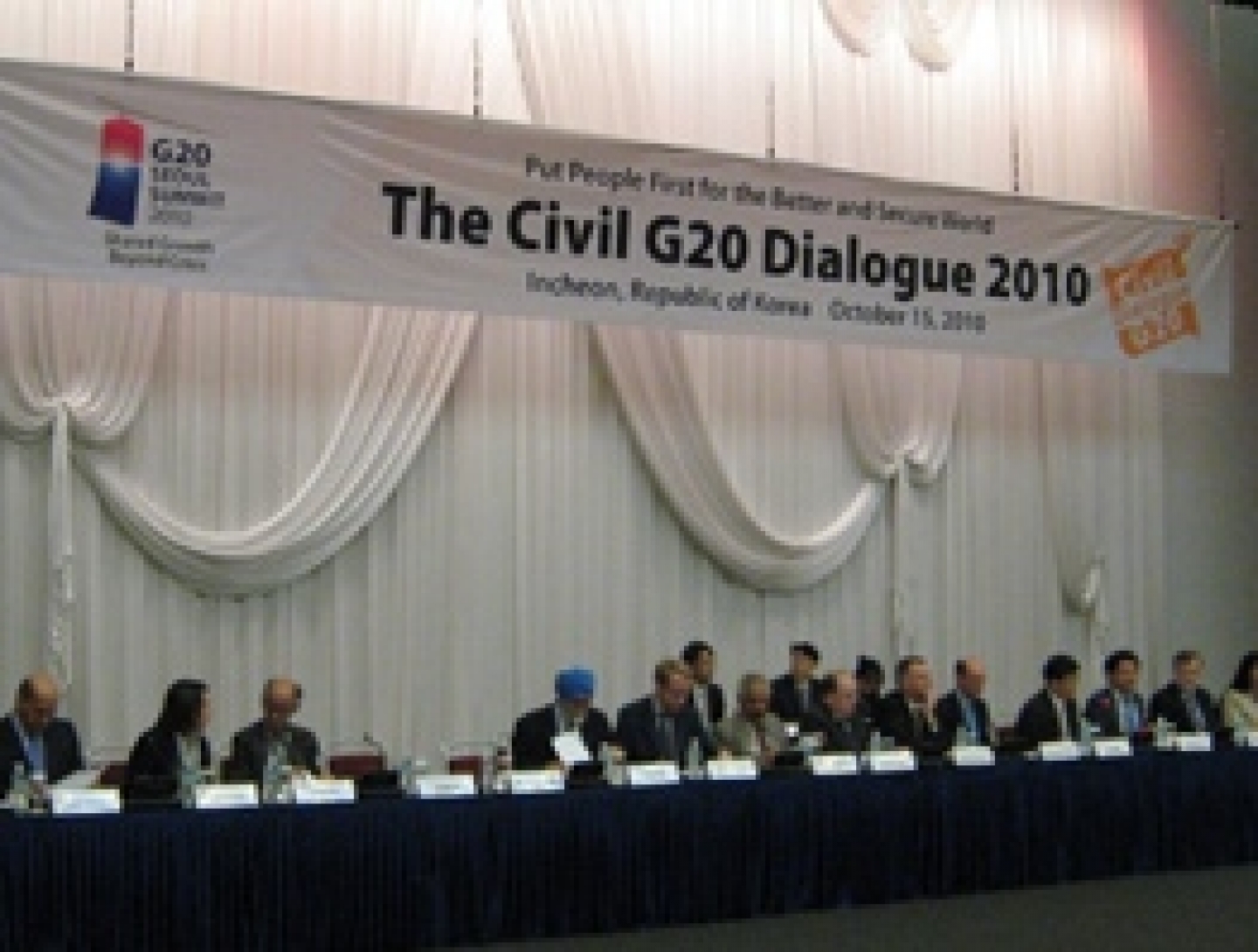 An important yet under-explored question about the G20 concerns the global societal response to this forum. We are all familiar with vivid summit images of protest contrasted with isolated leaders. But in the lead up to the Seoul summit, civil society has had a more captive audience than before.

The G20 has evolved as a state-based project, focused largely on regulatory reform, leaders have been paramount. Along with their key officials from national bureaucracies, this elite network is evident in its highly technical orientation via the IMF, the FSB and the Basel III institutional mechanisms.

Return of the State ... and Gradual Opening

Justifications for this approach stem from the ‘near death experience’ of the financial shocks in late-2008, when the need was for concerted action by states. Indeed one of the main features of the crisis has been the manner by which it returned the state to the core of the policy debates as a counterweight to the increases in freedom accorded to the financial markets over the past decade.

What has grabbed the most attention and headlines has been the resistance to the G20 as featured in the build up of street demonstrations in London, Pittsburgh and Toronto. Although the South Korean government has put elaborate security measures into place, the Seoul G20 promises to see a similar form of direct action. Demonstrations led by the Korean Confederation of Trade Unions and other activists have already started and will continue through to the end of the G20 summit.

There are signs, however, that another significant component of civil society is accommodating itself to the G20, paralleling albeit not replicating the ‘inside’ orientation of select business groups operating through theG20 Business Forum.

In a move that has attracted little notice beyond its participants, the Korean government held a formal Civil G20 Dialogue on 14-15 October in Incheon that allowed a face-to-face meeting between civil society representatives and key officials preparing the Seoul G20.

A number of features in this meeting jump out. First, the dialogue was a comprehensive one with the discussion extending beyond the state-based agenda to cover issues such as perceived gaps in the legitimacy of the G20. Second, Civil society positioned itself not only as the champion of an expanded development agenda (with an emphasis on financing for development/MDGs and a rights based approach for development), but also on filling the perceived gaps of legitimacy in the G20. And third, the meeting constituted a procedural breakthrough due to the presence and active participation of so many sherpas and sous-sheraps, including those from India, Indonesia, Mexico and South Africa.

Push for a Development Consensus

Getting tangible results in terms of the G20 agenda will prove more difficult, especially as the summit will be pre-occupied by the controversial issues among states such as the ‘currency wars’ and global imbalances. But what is significant is that an increasing component of civil society explicitly identifies with key aims of the G20, as proposed by the South Korean government. The hope is that the Korean G20 will adopt a ‘Seoul Development Consensus’, as expressed by Oxfam and other NGOs, that can establish a foundation for concerted action in future summits.

Such an accentuated degree of buy-in from civil society counters the alternative images of the street demonstrations in G20 host cities. The test to make sure this revised image has traction will be to ensure that the G20 moves from crisis response mode to an approach that positions this forum as the embedded hub of global governance.

Andrew F. Cooper is a Distinguished Fellow at CIGI, and a professor of Political Science at the University of Waterloo.

*This commentary is an updated and revised version of presentation made at the European Union Institute for Security Studies in Paris on 21 October 2010.