Ruined EU and Greek flags fly in tatters from a flag pole at a beach at Anavissos village, southwest of Athens, on Monday, March 16, 2015. (AP Photo/Yorgos Karahalis)

A former student now working with an internationally recognized investment advisory boutique (hat tip: JM) has goaded me into defending my optimistic take on the Greek debt negotiations. The Brookings Institution hosted the German and Greek finance ministers on the margins of the IMF/World Bank Spring Meetings in Washington in early April. At the time, I detected what I thought might be hints of a possible compromise, which, invoking Keynes’ words of 70 years ago, could be the first stirrings of the "sweet breath of Justice."

Since then, the outlook has darkened considerably. Positions have hardened, with Eurozone finance ministers expressing frustration and annoyance with Athens. And a rising chorus of voices from Brussels to Berlin sings the potential praises of Grexit — that it is better to let Greece exit the Eurozone than to make further concessions. In part, this refrain reflects the fear in Berlin that if Greece gets a better deal other Eurozone members in financial difficulties would seek similar treatment (think: Podemos).

The thing is, despite its unchallenged leadership of the Eurozone, Berlin doesn’t make policy in a vacuum; fiscal policy has to work in tandem with monetary policy. And the view from the ECB in Frankfurt may be rather different than that from Berlin.

Put yourself in Mario Draghi's position. He is presiding over an economic recovery that is anemic at best and is undoubtedly fearful of anything that might threaten growth. Renewed uncertainty of what a Grexit might entail could be precisely the shock that disrupts Europe’s recovery. Of course, as a number of commentators have argued, Grexit need not lead to disruption if Eurozone members and Greece adopt and maintain sound policy frameworks. (Implicit in this view is the notion that volatility of economic indicators reflects volatility and inconsistency of underlying policy frameworks: sound, stable policy frameworks beget strong, stable growth.) But Euro skeptics might argue that thinking ahead, anticipating problems and acting proactively to mitigate potential risks has not been the Eurozone’s game plan through the crisis. Needed policy responses, they contend, came only after vacillation on the part of the Eurozone’s leadership.

So, while Eurozone finance ministers may be Howard Beale mad as hell, and Brussels may threaten not to engage in further discussions until Athens pre-commits to reforms, their top financial advisor is likely counselling moderation. There are a number of considerations to bear in mind.

First, there is, I think, broad agreement among most commentators (and, seemingly, the IMF) that the debt won't (can't) be paid as contracted under current economic conditions; pretending that it will or can be is disingenuous. This leaves open the question of whether Athens is suffering from a solvency or liquidity problem. The former implies that the stock of debt outstanding exceeds the discounted present value of current and future tax revenues under reasonable assumptions for growth and interest rates. Illiquidity implies that this inter-temporal budget constraint could be met, but there is a timing problem: there is a period in which required repayments exceed expected revenues. Of course, it is possible that a liquidity problem could result in a solvency problem if, say, financial difficulties lead to increased uncertainty ("animal spirits") and lower investment that, in turn, reduces growth.

Second, while the structural reforms, such as privatization, may or may not have been implemented according to the agreement, the troika agreement was signed in the context of sustained insufficient global aggregate demand, dysfunctional gold standard and Ackerlof "market for lemons" banks. Not to put too fine a point on it: the wisdom of initiating a large-scale privatization program in the midst of a Great Depression, when pervasive pessimism and a miasma of uncertainty depress asset values, can be questioned. (Compare the economic context of Greece’s program with the “Great Moderation” and strong growth prevailing when Gerhard Schröder introduced structural reforms more than a decade ago.) The IMF’s analysis suggests that the effectiveness of structural reforms is state dependent: they "work" in the context of full employment; can be counterproductive in periods of weak demand. Why? Adding dislocation in a period of unemployment creates a political dynamic that results in counter-productive responses. We are seeing the effects of that dynamic.

Perhaps the Greeks haven't tried on structural reforms. But if the reforms were not well conceived as Greek Finance Minister Varoufakis contends, what is the wisdom of following through on earlier commitments? To be clear, structural reforms are important in terms of raising growth and improving the debt-servicing capacity. That is the quid pro quo of debt restructuring — “we will provide relief if you do the difficult structural reforms you need to do, thereby making our loans more secure.” That makes sense only if the structural reforms actually work. Forcing adherence to measures regardless of their efficacy is akin to saying that they must persevere with structural reforms to punish Greeks for their spendthrift ways. As Krugman argues, moralizing shouldn't substitute for good economics.

Third, the Greeks have undertaken macroeconomic adjustment. The Financial Times, reporting on the European Commission’s latest projections, has a nice chart (below). From a large primary deficit, the budget moved to a primary surplus. Unfortunately, the expected growth that was to have accompanied stabilization did not materialize. That led to the erosion of popular support for the program and the election of a party that promised to renegotiate the terms of the program. 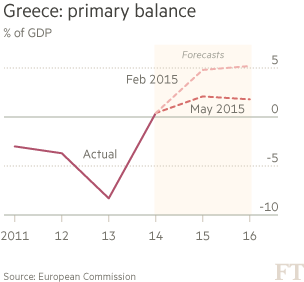 In this respect, democratically elected governments accountable to the people limit the degree of adjustment that can be undertaken in support of foreign claims. (Isn't that one of the lessons of the 20th century; isn't that why the IMF was created?). In some respects, Greece is in the same position as Latin America in the so-called "lost decade" of the 1980s debt crisis. Effective adjustment (i.e., debt restructuring) was deferred until such time as U.S. and other banks were immunized from debt write downs. That was good for the shareholders of the large international banks, but not necessarily for the poor of the region.

All of this leads me to two questions (the answers to which, frankly, I don’t know):

Are Eurozone finance ministers annoyed with Varoufakis because he is telling the truth (debt can't be repaid), or because he isn't participating in a lie —the fiction that the reform package developed by the troika is working (or can work) and the debt will be repaid without additional restructuring?

Was the troika package designed to assist Greece achieve a felicitous balance between financing and adjustment or provide the breathing space needed for banks to reduce exposure and build capital, and is that consistent with efficient risk bearing?

For the avoidance of doubt: I have no doubt that Greek policy making before, during and after the crisis wasn't optimal. But simple-minded approaches that say that all debt is sacrosanct and must be repaid, or a refusal to discuss how to improve a package of measures that was not providing the expected results at the expected costs, strike me as both bad economics and bad political analysis. Sovereign debt is different. Similarly, those who think that Grexit would be a relatively painless outcome to the Eurozone and/or Greece are equally myopic. The fact that there are costs to both sides of not getting a deal suggests to me that there is still some hope of a negotiated outcome that doesn’t entail a leap into the unknown of Grexit.

The question is whether it is the justice that Keynes had sought or the “temptation” for which he settled.