Is this time different?

April is the cruellest month, breeding
Lilacs out of the dead land, mixing
Memory and desire, stirring
Dull roots with spring rain.

The poet’s injunction notwithstanding, January — not April — was the cruelest month for emerging market economies. Financial storms raged around the globe late in the month, as capital raced out of countries that, by some accounts, had hitherto been the darling of international investors. The proximate cause of this turbulence was, of course, the so-called “tapering” of the US Federal Reserve’s program of bond buying — quantitative easing. And the resulting taper tantrum has led some to invoke the dreaded “C” word.

But was the January wobble the start of a contagion similar to earlier emerging market crises?

The prudent answer is that it is too early to be certain. Having said that, I think there are grounds for optimism. There are undoubtedly some countries that, for whatever reason, have pursued heterodox policy frameworks; regardless of how favourable a starting point, over time such policies eventually erode the foundations of growth. As the late Rudiger Dornbusch observed: “The crisis takes a much longer time coming than you think and then it happens much faster than you would have thought." And, the crisis, when it comes, usually starts at the foundations of the economy: with domestic residents; not foreign investors. There are, however, a number of other dynamic, rapidly-growing countries which have strengthened policy frameworks and followed prudent public finance management. These changes have, arguably, reduced their vulnerability to financial contagion — the fact that Mexico was upgraded in the midst of recent turbulence makes the case.

What are these innovations that have reduced the risks of contagion?

Start with monetary policy. In contrast to earlier episodes of monetary renormalization by advanced country central banks, many emerging market economies have given up attempts to fix, or target, the exchange rate. The adoption of the inflation-targeting framework has freed the exchange rate to play a shock-absorber role and monetary policy to focus on medium-term growth, avoiding the one-sided bets that Milton Friedman warned us about so many years ago.

In past cases of contagion, fixed exchange rates and open capital account proved a lethal combination. As long as the fixed exchange rate was viewed as credible, domestic firms borrowing in foreign currency judged exchange rate risks to be modest, while foreign investors lending to domestic financial institutions or to firms that enjoyed an implicit government guarantee judged default risks to be relatively low. The problem was an inconsistency in these expectations — or imperfect credibility. Credibility was high enough that the exchange rate peg was seen to be sustainable; yet the credibility of the overall policy framework was not sufficiently robust to reduce the gap between domestic and foreign interest rates. There was an incentive, therefore, to borrow abroad in foreign currencies (mostly U.S. dollars). At the same time, the credibility “gap” created a one-sided bet for speculators: once a sufficient deviation between the official and the underlying equilibrium exchange rate opened up, the annualized returns from speculation became far too high to be compensated by the interest rate differential. Flexible exchange rates, in contrast, have a salutary effect in terms of both reducing the risk of crisis beforehand and mitigating the severity of capital outflows. The reason for these effects is that depreciation raises the expected returns on new investments.

The second major change in emerging market policy frameworks concerns fiscal policy. As Reinhart and Rogoff note, here, fiscal policy in emerging markets has, in general, been remarkably prudent. In fact, as the graph below highlights, gross public debt as a percentage of GDP of emerging markets has trended down since 1990, while that of advanced economies increased as a result of the global financial crisis after levelling off in the mid-1990s. Care must be taken in examining this role reversal, however, since looking just at central government debt can be misleading. Private debts can quickly become public sector debts, while some obligations may be off the balance sheet of the central government. Sub-national debts can also become an issue. Nevertheless, it is clear that in most emerging markets fiscal policy over the past two decades has been sensible and, arguably, sustainable. 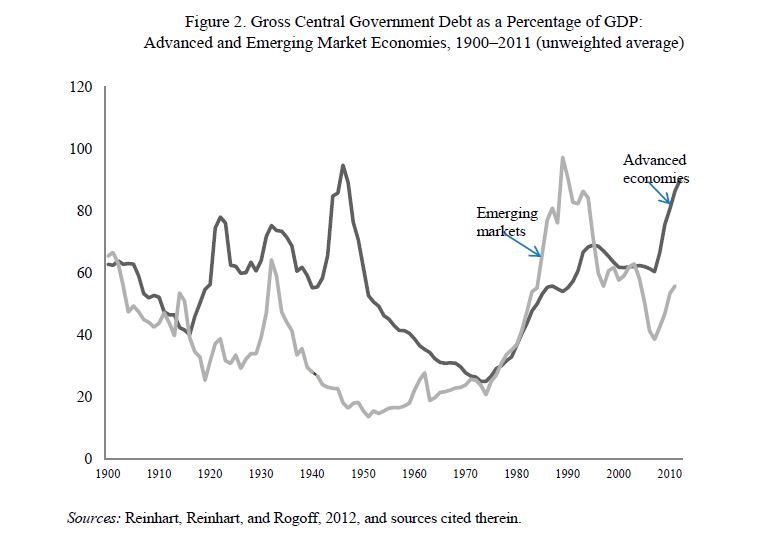 The third innovation in emerging markets policy frameworks has been in the area of public debt management. In the Asian crisis, too much external debt was denominated in foreign currency — U.S. dollars — while revenues were denominated in the domestic currency. The resulting mismatching of debt led to a steep increase in debt-servicing burdens following the initial exchange rate depreciations. At a stroke, firms were suddenly confronted with insolvency and private sector debts were moved onto public balance sheets as a quid pro quo for the rollover of debt. In the wake of the Asian financial crisis, a number of governments undertook efforts to reduce currency mismatches by issuing longer-term domestic currency bonds and developing derivatives markets to hedge against exchange rate risks.

All of this is not to say that all emerging markets are alike. Not all countries have made the same progress. But that is exactly the point — I think a case can be made that there have been enough improvements in enough emerging markets that markets might differentiate between them as global monetary conditions are renormalized. In this respect, when it comes to the risk of emerging market contagion, this time may, indeed, be different.