Torn Apart at the Seams: Is Europe Failing?

The news from Europe is scarcely getting better. Germany and the rest of the EU are locked in a battle about how to introduce a banking union and mechanisms not only to end ‘too big to fail’ but also to provide funds for future bailouts, if necessary. Indeed, in an about face, we have moved from relying on bailouts to deal with financial crises to bail-ins. The recent Cyprus episode has contributed to further damaging everyone’s reputation, including the IMF, a partner in the process, and revealed the EU’s continued inability to offer credible and consistent policies.

Tensions over whether to soften existing austerity measures also persist. While Germany’s finance minister has softened his stance on the issue, other German personalities, notably on the ECB’s Executive Board, still maintain that fiscal consolidation remains essential. Any other policy is simply tantamount to following the ‘road to perdition’. As if this is not enough, the U.K.’s government is preparing a referendum on EU membership and negotiating an exit from the EU.

Such battles might reflect the normal tensions that are to be expected, particularly when managing complex and incomplete arrangements that the EU and the euro zone represent, but they fail to capture the deep erosion of the European ideal that past generations of policy makers and politicians tried so hard to implement and popularize.

The following charts, from the PEW Research Centre, highlight the growing disenchantment with the European concept. Adding insult to injury the poll also reveals a growing gap between Germany, and the (mainly southern) periphery. Talk of a northern and a southern euro zone no longer seems as far-fetched as it was a year ago. More tellingly, one wonders whether the EU can survive the public turning its back on Europe as an entity. 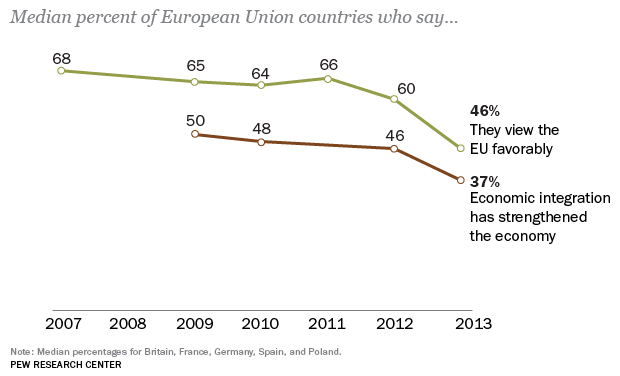 The drop in support for BOTH the EU and the concept of economic integration that is the cornerstone of the Maastricht Treaty has declined markedly. Only a relatively small minority sees the economic benefits of a single European market. 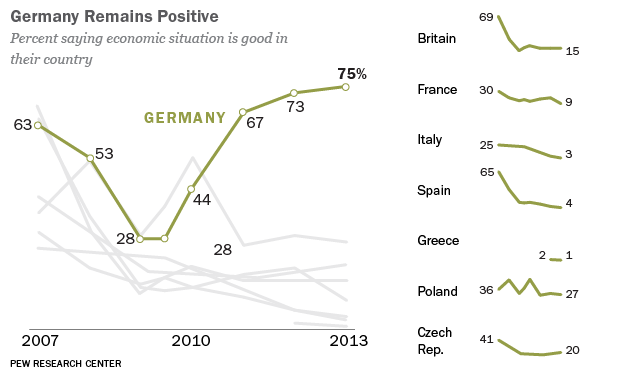 The above chart underscores the fact that Germany is increasingly alone in thinking that the overall economic situation is favorable. The drop in the economic ‘mood’ in large parts of Europe, is nothing short of spectacular. Indeed, the large number of single digits that represent the fraction of those polled who think the economic environment is ‘good’ is depressing. 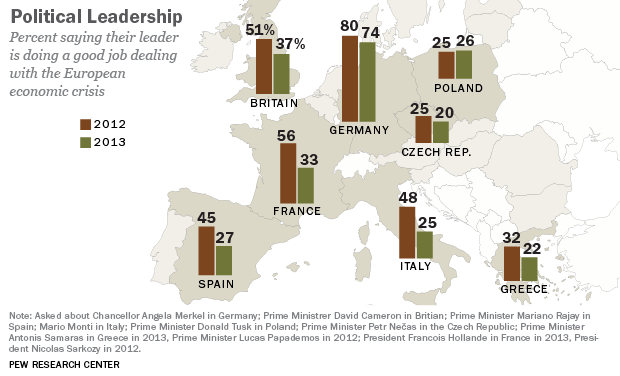 A weak economy is not the only worry in Europe. Political leadership has taken a heavy beating almost everywhere. If there is poor leadership then where will the credible policies that will return the EU and the euro zone to growth come from?