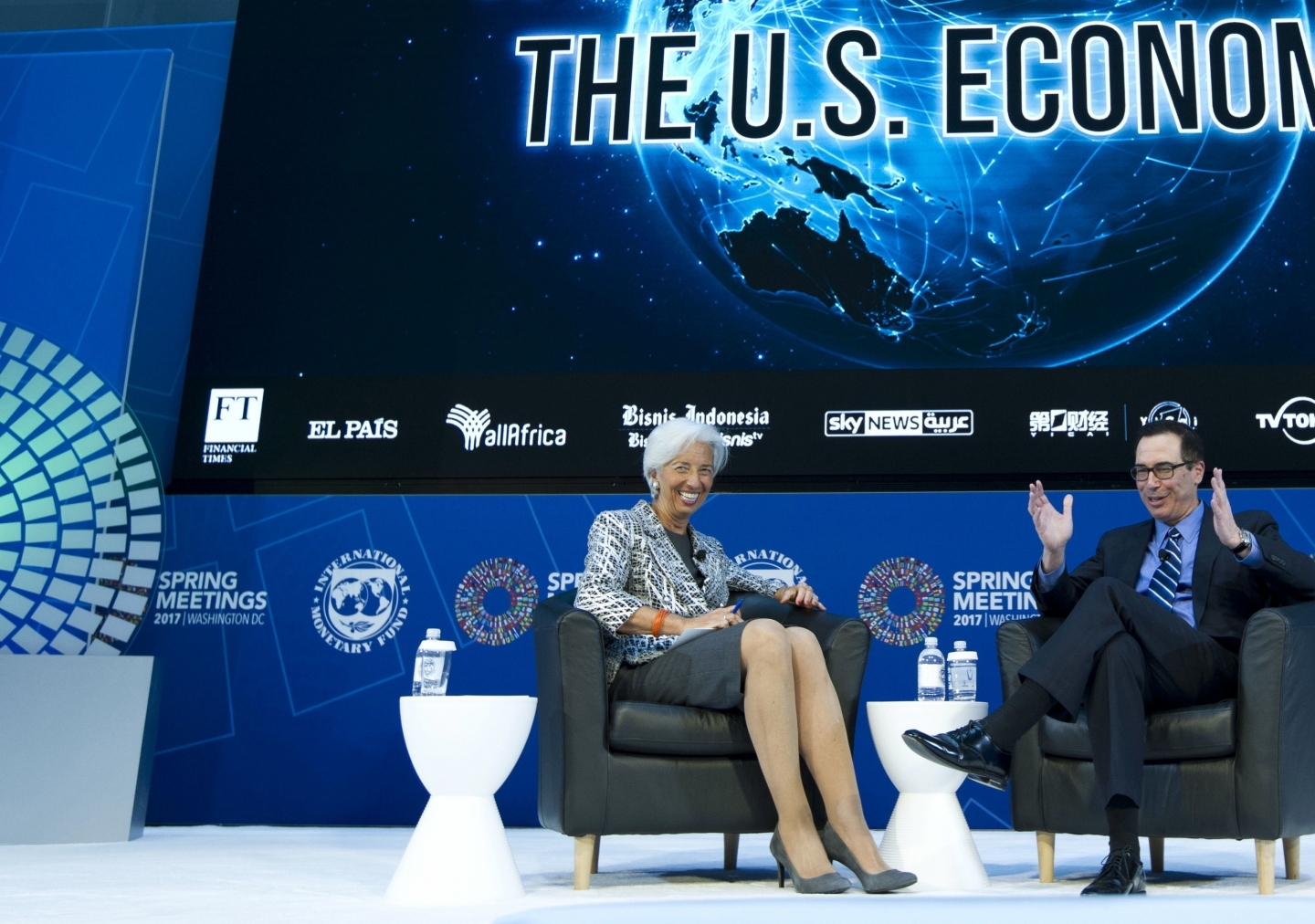 Christine Lagarde is a brilliant communicator. The managing director of the International Monetary Fund (IMF) would have known the only thing her members would be talking about at their spring meetings in Washington over the weekend would be US President Donald Trump.

So she had Trump’s Treasury secretary, Steven Mnuchin, join her on stage for an interview. It was the most anticipated event on the public program. A standing-room-only crowd gathered in the atrium of the IMF’s headquarters to view the spectacle.

Lagarde, sartorially elegant, had little chemistry with Mnuchin, who produced the latest Batman movie, but apparently learned nothing about Hollywood glamour. Lagarde avoided antagonizing the man who effectively has a veto over most IMF decisions.

Ahead of the US presidential contest, Lagarde positioned herself to lead the defence of globalization. Yet she mostly stayed away from trade during her hour-long discussion with Mnuchin, a lieutenant of the nationalist backlash. The US Treasury reiterated the fanciful notion that Trump will create “sustainable growth” of “three percent or more.” Few economists think that is possible at a time when the working population is shrinking and productivity is weak. Lagarde let it pass.

It’s not only Lagarde who is struggling for a rapport with the Trump administration.

Whether it is the Group of Twenty (G20) or the IMF, former champions of the liberal order appear either unable or unwilling to stand for what they say they believe. Mnuchin said he met more than a dozen of his counterparts in Washington, as he did when G20 finance ministers and central bankers met in Germany in February. There is little outward evidence those bilaterals are doing anything to change the Trump administration’s ambivalence about trade. In fact, the evidence suggests the opposite.

On the weekend, the IMF’s steering committee, the International Monetary Finance Committee (IMFC), dropped a promise to “resist all forms of protectionism” in the communiqué it customarily releases after each meeting. The change in wording was a replay of the G20 meeting in Baden-Baden, Germany, where Mnuchin refused to allow any reference to fighting protectionism. During his conversation with Lagarde, Mnuchin recalled the “enormous” amount of time spent on the communiqué at the G20. This time it was much simpler, he said.

Non-Americans don’t like to talk about how Trump is forcing a dilution in the international commitment to open trade. Canada is lobbying various levels of US government to keep borders open, an effort that Finance Minister Bill Morneau said on the weekend is working, despite new threats from the White House. Germany’s Wolfgang Schäuble, the current chair of the G20 finance ministers, said there was no point talking about Trump’s trade policies because the US president hasn’t yet decided what they are and so it would be speculation. When asked about the shift in the IMFC’s language, Agustín Carstens, Mexico’s central bank governor and the chairman of the committee, downplayed the significance of the retreat.

“What we try to do in these types of meetings is to strike a positive, constructive balance,” Carstens said at a press conference. “And the use of the word protectionism is very ambiguous.”

Ambiguous? Not to China’s central bank governor, Zhou Xiaochuan, who said in his official presentation to the IMFC that “it is especially important to enhance the multilateral system of open and free trade and investment, jointly resist protectionism, and accelerate the liberalization of global trade and investment.”

There were other examples of IMFC members favouring stronger language on trade in their individual statements.

Schäuble said that his country “commits to keep the global economy open, resist protectionism and keep global economic and financial cooperation on track, including by further strengthening a rules-based international order, of which multilateral institutions and fora, and their processes, form an important part.”

France’s Michel Sapin said that he “supports the objective of stronger concerted discipline and a more effective multilateral trading system with the World Trade Organization and the dispute settlement mechanism at its centre.”

Brazil’s Henrique Meirelles said: “More integration and technological progress, not less, is the key to address poverty and inequality.”

Lagarde did manage to steer Mnuchin into stating something that may help the rest of the world understand the Trump administration’s approach to trade. Mnuchin said his boss expects “reciprocal” trade; if the United States offers tariff-free access, American companies should receive the same in response. Lagarde asked if that implied a “tit-for-tat” approach to negotiations. Mnuchin, after a brief pause, said: “Yes.”

That’s not really how multilateral cooperation is supposed to work.

Washington appears set on dealing with countries on a bilateral basis, using its status as the world’s richest economy to exert its will. This can only erode the importance of global institutions such as the IMF and the G20, and yet those who value international cooperation so far have shown little willingness to protect what they have built. 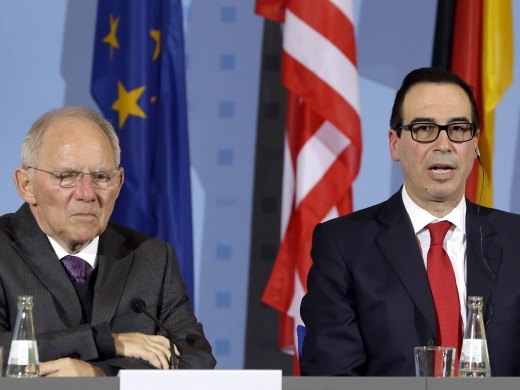 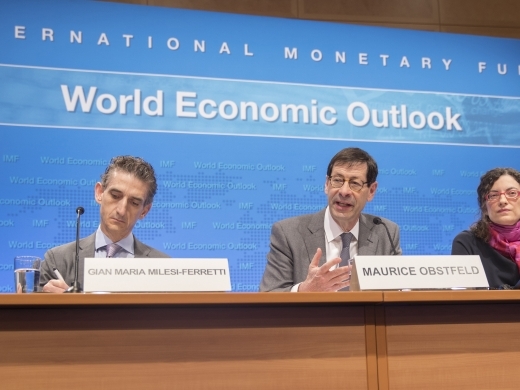 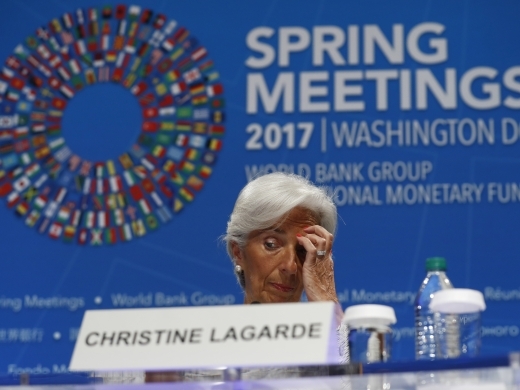 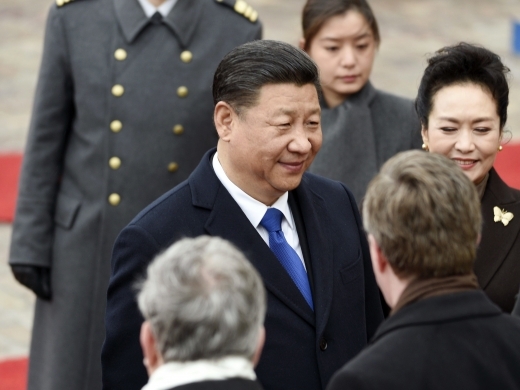 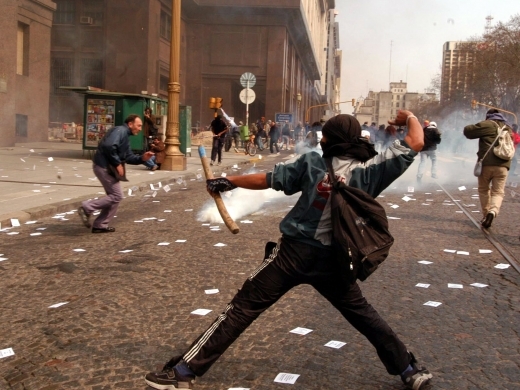 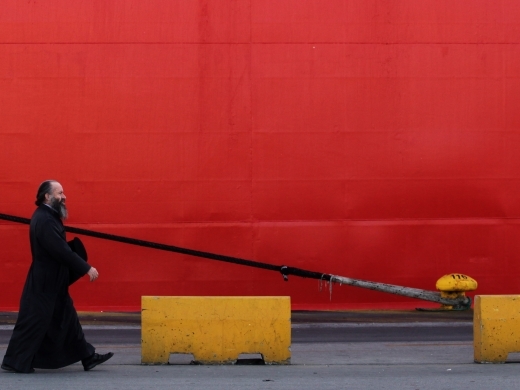 IMF
Time for IMF to Step Out of Confessional Box 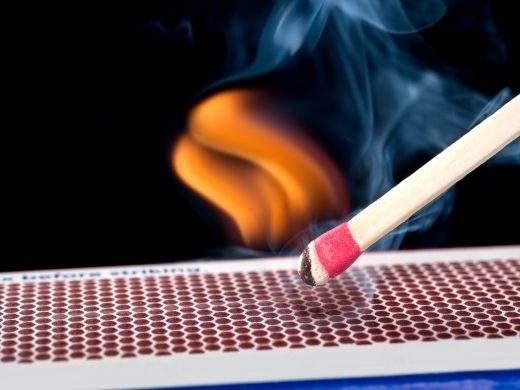