Trump, Trade and the Lessons Not Learned

Like Banquo’s ghost in Shakespeare’s Macbeth, there was a presence haunting the gathering of multilateral institutions 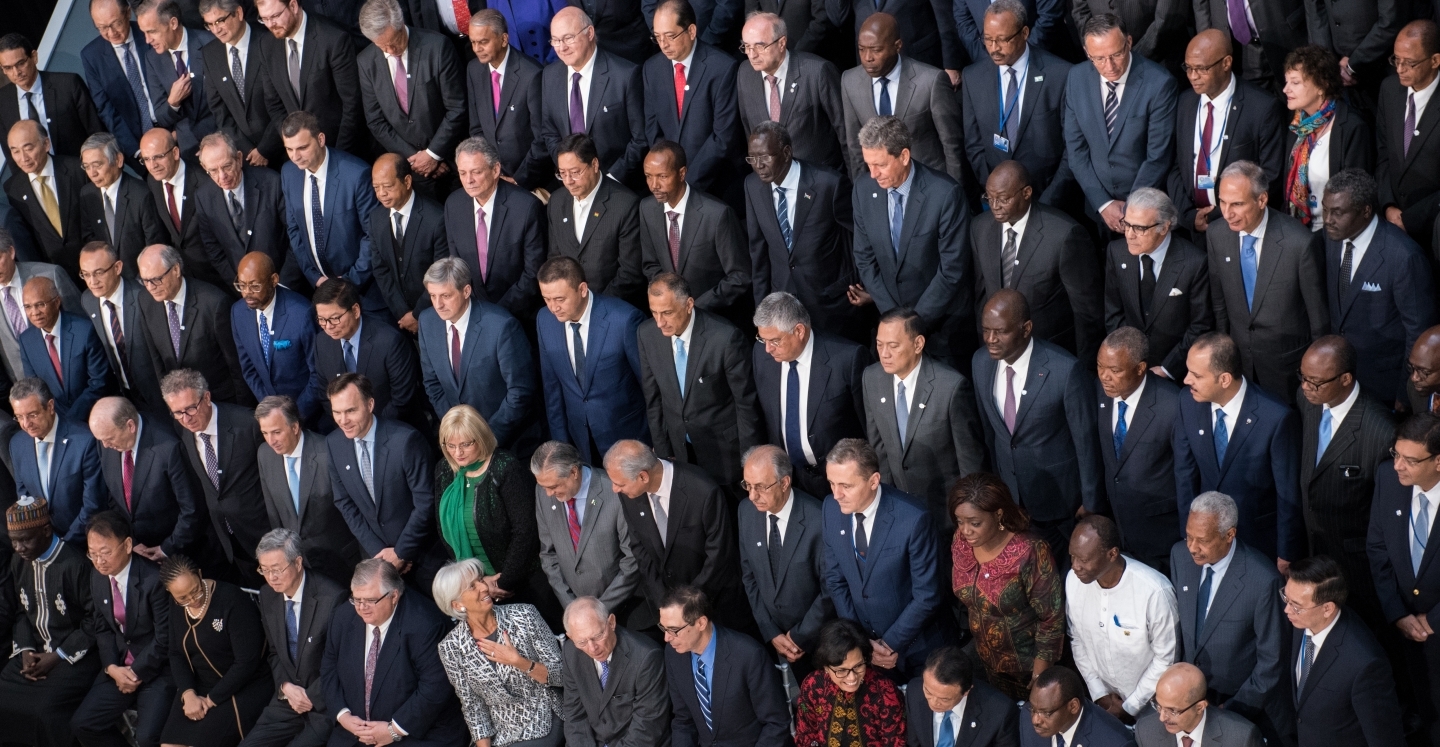 Christine Lagarde looks over her shoulder in the family photo before the IMFC meeting. (IMF Photo/Ryan Rayburn)

Like Banquo’s ghost in Shakespeare’s Macbeth, there was a presence haunting the spring meetings of the International Monetary Fund (IMF) and World Bank in Washington, D.C. earlier this month.

Donald Trump did not participate in the meetings, but the delegates who did were still conscious of him constantly. The most significant effect of the Trump presidency is also its least tangible: the fog of uncertainty his administration has spread across the international landscape.

Trump is not alone in this regard, of course. Last June’s Brexit vote and the United Kingdom’s subsequent decision to divorce itself from the European Union, the French presidential elections and, more generally, the political fissures spreading across much of Europe — all contribute to the sense of uncertainty. In the first instance, these developments threaten European economic and political integration, the foundations for which were laid in the ruins of World War II as former enemies came together to create a lasting peace built on shared prosperity. But the rise of populism could also have global effects.

In particular, the uncertainty hanging over the spring meetings in Washington cast doubt on the future of the international order the IMF and World Bank were created to support. This system was designed to transform the way individual countries view the global economy. International economic relations in the 1930s were characterized by a zero-sum game of bilateral trade arrangements and restrictive currency practices — in which one country’s gains came at another’s expense. In contrast, the post-war institutions of international economic, financial and trade cooperation created a positive-sum game in which all ‘players’ can benefit from multilateral trade liberalization, convertible currencies and international financial and monetary stability.

The architects of this post-war system succeeded beyond expectations. Indeed, it’s likely that no period of history witnessed a greater reduction in global poverty.

Unfortunately, the rise of political populism threatens the status quo. Consider the decision this past weekend to remove language on resisting protectionism from the concluding statement of the International Monetary and Financial Committee.

The decision — like that at the March G20 finance ministers’ meeting in Germany, which was made at the behest of the United States — could signal U.S. dissatisfaction with the multilateral process and an attempt to placate Trump’s supporters. Alternatively, it could reflect an intent to pursue better trade deals bilaterally in an ‘America First’ trade policy reminiscent of the 1930s.

And while nothing the administration has done thus far constitutes an existential threat to the international system, that’s the nature of this uncertainty — such an outcome cannot be ruled out. All of this could impair growth by creating an option-value for waiting, as firms postpone investment and households defer large expenditures until the future becomes clearer.

What’s is going on here? It’s foolish to attempt to explain events as they unfold; the historian’s perspective is lacking. And yet, if the risks are to be avoided, we have to try to achieve some understanding of them. In this respect, two distinct effects seem to be at work behind the rise of populism.

The first effect is political. In a number of countries, there is a sense that the economic and financial integration which has lifted millions out of poverty around the globe has also eroded the sense of national identity and encroached on sovereignty, restricting the ability of governments to address domestic priorities. While the merits of this argument can be debated, there is no question that it has been successfully exploited by politicians seeking to ride a wave of nationalist fervor or to exploit populism for partisan purposes.

The second factor that may explain the rise of populism is economic. A critical element of the post-war international system was a commitment to full employment, such as the U.S. Employment Act of 1946. This pledge ensured that workers displaced by the effects of trade liberalization would not languish in long-term unemployment. This is because job losses in sectors facing increased foreign competition would be offset by job gains in sectors benefiting from higher exports. Moreover, the fact that trade promotes efficient resource allocation meant that those jobs offered higher wages and better benefits.

For much of the past 70 years, the commitment to full employment was accepted by governments around the globe and was the target of policymakers. In the wake of the global financial crisis, however, unemployment in a number of countries soared and remained too high for too long; as a result, unemployed workers lost their attachment to the labour market and their sense of identity, self-worth and the social contact that a job provides. It is hardly surprising, therefore, that a populist message condemning trade receives a favourable response in areas of high unemployment.

This failure to restore full employment may reflect the size of the financial shock and the possible effects — real and imagined — of globalization in limiting the scope for governments to respond. These factors may have played a role. But in a number of countries, a conscious decision was made to pursue fiscal austerity.

With central banks fully mobilized fighting the effects of the financial crisis, and interest rates as low as they could possibly go, modest fiscal expansion would have moved economies to full employment faster. As it was, fiscal restraint in some large economies reduced growth and held back the recovery. It was as if the basic lessons of the 1930s were forgotten in some misguided fealty to the policy prescriptions of the gold standard.

That earlier episode of political and economic disruption entailed enormous economic costs and, arguably, led to global war. In this respect, while political populists haunted the IMF/World Bank meetings last week, we should hope that it’s the spirit of the men and women who built these institutions of multilateralism and open, transparent trade that animates international policy going forward.