A key tenant of inflation-targeting central bankers (ITCBs) is symmetry. That is to say, policy responses that are symmetric with respect to deviations from their inflation target: inflation above the target elicits tightening; inflation below the target triggers monetary easing. All ITCBs profess fealty to the principle of symmetry. Yet, as the chart below illustrates, with the exceptions of Australia and the U.K., over the past two years inflation in most advanced economies has been persistently below target. Could this performance belie an asymmetry in what ITCBs say and do? Are their policy responses to deviations from the target unbalanced? 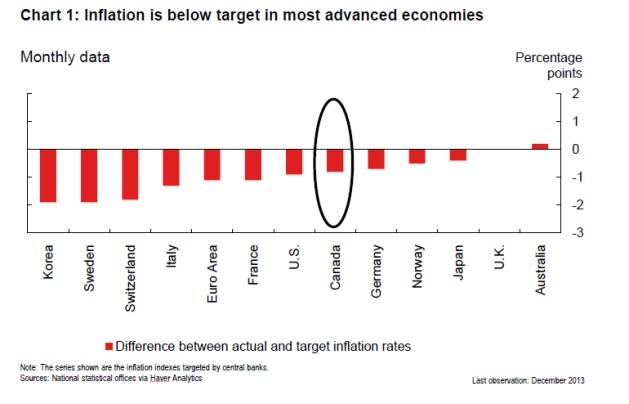 For the avoidance of doubt, I don’t think central bankers are intentionally undershooting their inflation targets. I suspect they are too wary of the potential risks of temporizing with deflation. The problem is that central banks have had enormous difficulty getting their economies to behave as they should. In much the same way that British Real Admiral Jellico exclaimed, “There’s something wrong with our bloody ships today!” after losing a third of his ships at the Battle of Jutland, ITCBs might be forgiven for lamenting: “There’s something wrong with our bloody economies!”[1] Tiff MacKlem, outgoing senior Deputy Governor of the Bank of Canada, recently gave a thoughtful speech, here, on the challenges of inflation targeting in the post-crisis world from which the chart above is taken. This issue has come to the fore in the recent debate over the timing and path of the Fed's exit from the extraordinary monetary policies adopted in the wake of the global financial crisis.

In post-bubble economies, the financial shock has left consumers traumatized; even historically low interest rates are insufficient to stimulate demand. Or, rather, “the” real interest rate (nominal rate less the expected rate of inflation) is “stuck” at a level above the level that would move the economy to full employment because the nominal rate is already effectively zero. In these circumstances, the only way central banks can reduce the real interest is to raise expected inflation because zero means zero.

As Paul Krugman contends, these problems shouldn’t be a surprise for anyone who has studied the Great Depression or, for that matter, any sentient person who has observed Japan’s decades-long fight with deflation. The collapse of an asset bubble has far-reaching effects that require extraordinary measures. In the midst of the financial crisis, central bankers adopted such measures to prevent a global financial collapse. They succeeded. But, in too many countries, output remains below its pre-crisis level and unemployment is far too high. And Larry Summers has recently speculated that the North Atlantic economies — by which he refers to the mature advanced economies — face the risk of secular stagnation.

In a nutshell, the problem is that while ITCBs may aim for symmetry they might have to adopt very asymmetric policy stances — in effect, commit to inflation above their own targets in order to achieve those targets.

To say the least, this is unsettling for the current generation of ITCBs central bankers, most of whom studied the importance of credibility in the context of the literature on policy games and dynamic inconsistency. At the risk of gross simplification: credibility allows a central banker to reduce inflation, or maintain inflation at target, with less cost in terms of below-potential output (think of a Volker-type recession); the more credibility a central banker has, the more stable the economy. And the way to acquire credibility is maintaining fealty to the target.

All of that makes perfect sense in an economy operating around full employment in which the monetary transmission mechanism — the relationships between the instruments at the disposal of the central bank, financial conditions, output and, eventually, inflation — is functioning. That is not the case in a number of countries trapped in the liquidity trap; as Krugman says, they may stay there if their central bankers can’t break free of a timidity trap.

So, are inflation-targeting central bankers unbalanced? No. Perhaps their policies should be?