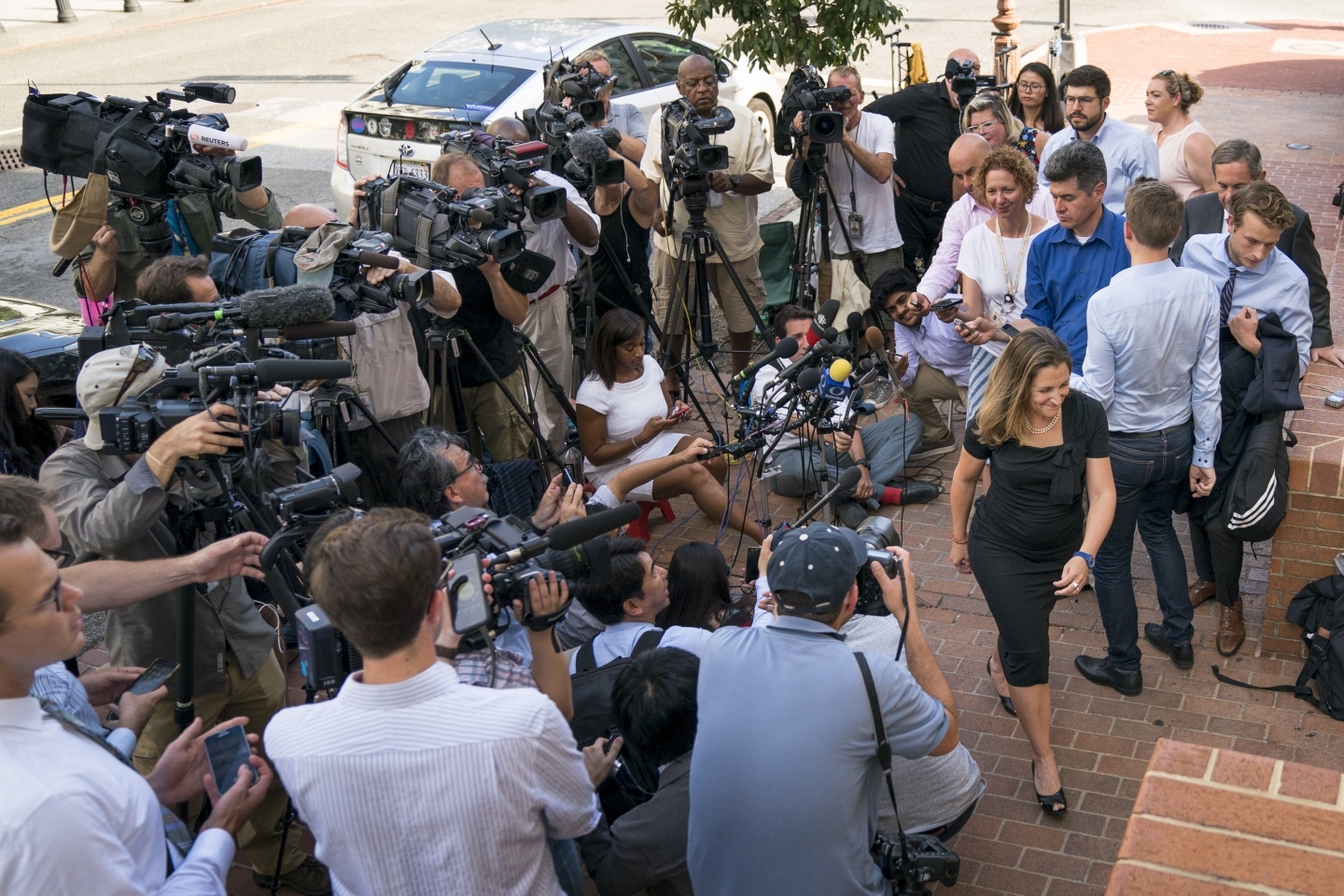 Canadian Foreign Affairs Minister Chrystia Freeland speaks to members of the media as she arrives at the Office of the United States Trade Representative, August 28, 2018, in Washington. (AP Photo/Andrew Harnik)

Canadian Foreign Affairs Minister Chrystia Freeland, a top trade negotiator for Canada, cut short a diplomatic trip to Ukraine and Europe so she could head to Washington.

Her trip followed on a new, preliminary trade agreement reached the day before between Mexico and the United States. The bilateral pact raised prospects that the existing North American Free Trade Agreement (NAFTA) might be eliminated. In the wake of the Mexico-US deal, President Donald Trump suggested that he was ready to ditch Canada if it wasn’t able to reach an agreement with the United States quickly. He suggested eliminating the name NAFTA, calling the deal the “US-Mexico Trade Agreement.”

The Trump administration has given Canada a short deadline — Friday — to reach an agreement on key differences, following months of on-again-off-again negotiations. And what happens if a deal isn’t struck? Trump reiterated his threat of imposing tariffs on Canadian automobiles entering the United States, saying that “frankly, the easiest thing we can do is to tariff their cars coming in.” Trump had previously threatened to impose a 25 percent tariff on Canadian auto exports to the United States.

Avery Shenfeld, chief economist at CIBC Capital Markets, suggested that such a tariff would make a significant dent in the Canadian economy. Shenfeld argues that an extended period with a 25 percent tariff on Canadian automobile exports to the United States could result in 900,000 fewer cars produced in Canada a year — and could cause a mild recession in Ontario, even a national recession across Canada, including a drag on GDP of up to one percent.

“We’re negotiating under a fairly big threat from the US — if we don’t sign on we will get a 25 percent tariff on auto imports,” he said. “That’s a sword of Damocles waiting to drop if we [Canada] can’t reach a deal.” 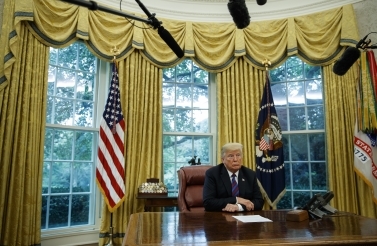 A tariff — and escalating trade dispute — could be bad news for the US economy and market as well. Ottawa would retaliate immediately with tariffs on a wide variety of American products entering Canada, as it did after the US move earlier this year to impose tariffs on Canadian steel and aluminum exports.

“Canadian tariffs on US products wouldn’t be as big a deal for the US,” said Shenfeld. “The US is a much larger market, not as dependent on Canada as Canada is on the US — but it would still be negative.”

The big American automakers — General Motors and Ford — that have manufacturing facilities in Canada would find that their manufacturing production is seriously disrupted.

“An open trade war with Canada is not a win for the US or US automakers,” Shenfeld said. “US-headquartered auto companies have made major investments in Canadian facilities and they would be seriously disrupted…”

According to the Canadian Broadcasting Corporation, Freeland is planning to have detailed conversations about specific issues in Washington, and has said that Mexico has made some significant concessions on labour and rules of origin in the auto sector, which will be “positive for Canadian workers...positive for US workers.” The Globe and Mail reported that Canada is prepared to make concessions on the Canadian dairy sector to reach a deal on NAFTA.

However, the two sides may still be far apart on some critical issues. Shenfeld argues that Canada is probably satisfied with provisions that were reached between the United States and Mexico on automobiles. However, he and others argue that there are at least two big disputes remaining — one of which involves NAFTA’s Chapter 19 dispute resolution mechanism and another over government procurement contracts. The United States has a proposal that would only allow Canadian companies to be eligible to bid on a much smaller slice of federal projects than they currently can.

In addition, US regulators want to see the Chapter 19 provision abolished because, they argue, it gives Canada an unfair advantage. The current NAFTA provision allows three panels, each with five experts (although some south of the border dispute the term “experts” to describe the participants) to meet and determine, for example, if US softwood lumber duties meet US trade law requirements. The panels are usually comprised of three Canadians and two Americans, or vice versa. If Chapter 19 is ultimately dismantled, many NAFTA disputes would go to the US Court of International Trade, which focuses on cases involving the application of US trade laws. Any appeals would be sent to a US federal appeals court.

Shenfeld argues that the problem for Canadian Prime Minister Justin Trudeau is that the dispute resolution provision is considered critical for Canada. In 1987, Prime Minister Brian Mulroney shocked negotiators by walking away from US-Canada trade negotiations over his insistence that the deal include a dispute settlement system that was outside of the US court system. The two sides quickly relaunched discussions, and the system was included in the deal.

“So, politically it [the dispute resolution system] is a big deal for Canada,” Shenfeld said. “If you [Canada] give it up, you go to US courts to resolve disputes. If it was dismantled, you would be stuck with the US system and the impression in Canada that that system is biased in favour of the US.”

Canada could pursue a litigation track with the World Trade Organization (WTO), but that process could take years. In addition, Shenfeld notes that the United States is trying to dismantle that hearing review process as well, by seeking to block the appointment of members of the WTO’s Appellate Body, a move that could make it incapable of hearing and resolving disputes.

Friday’s deadline for Canada is approaching rapidly. However, the deadline may not be as set in stone as many people believe. The Trump administration on Friday wants to trigger a 90-day warning to Congress that it will sign an agreement with Mexico, and possibly Canada, at the end of November. The end of November is the latest that the outgoing Mexican president, Enrique Peña Nieto, who negotiated the US-Mexico agreement, can sign a deal. The goal is to have Congress approve the revised trade deal then. However, incoming Mexican President-elect Andrés Manuel López Obrador also participated in the discussions, and he may also approve the Mexican component of the agreement.

“Incoming Mexican President Obrador was also at the negotiating table,” Shenfeld said. “It isn’t necessarily a fatal process if we go through that Friday deadline with no agreement.”