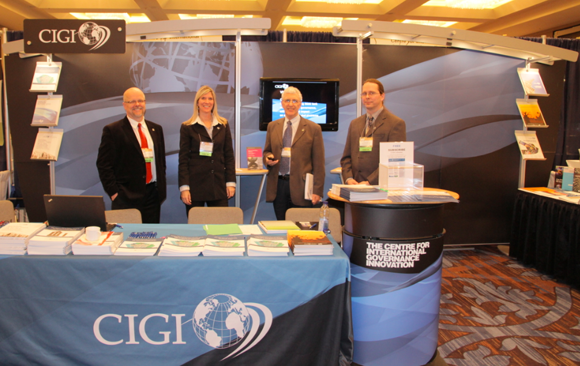 Staff of The Centre for International Governance Innovation (CIGI) gather at the think-tank's booth, during the International Studies Association (ISA) conference in Montreal, March 16-19, 2011. From left: Fred Kuntz, vice president of public affairs, Colleen Fitzpatrick, community relations and events manager, Max Brem, senior director for publications and Matthew Bunch, publications coordinator. More than a dozen CIGI fellows and CIGI chairs, as well as other staff, attended ISA (with a conference theme in 2011 of "Global Governance: Political Authority in Transition"), with some CIGI personnel appearing on panels to discuss a wide variety of issues in international affairs. At the CIGI booth, various new CIGI publications were available, including "Challenges and Opportunities for the French Presidency: The G20 - 2011 and Beyond," a conference report and background papers from CIGI's G20 Working Group. About 5,000 participants attended the conference, including thousands of university professors and graduate students in international relations courses across North America.

The emergence of new global challenges and actors is questioning the post-World War II multilateral system. Calls are multiplying to close the geopolitical and democratic gaps that are impeding the further development of international governance. At the same time, there is growing concern that membership enlargement and inclusive consultation mechanisms will inevitably dilute some countries’ voice in the world, including countries that have traditionally played a “middle power” role.