The increasingly digital economy is changing daily life in emerging and advanced economies alike; India and Canada are no exception. While both nations face their own unique challenges amid rapid technological advancement, their shared values create a unique opportunity for collaboration. The Canada-India Track 1.5 Dialogue on Innovation, Growth and Prosperity — a three-year partnership between the Centre for International Governance Innovation (CIGI) and Gateway House — was created to explore those opportunities.

By convening experts, government officials and business leaders, the Track 1.5 Dialogue will promote bilateral economic growth and innovation, and identify areas where improved cooperation could benefit both countries. In this video, CIGI President Rohinton P. Medhora, Gateway House Executive Director Manjeet Kripalani — along with government stakeholders from both Canada and India — introduce the Dialogue and what it hopes to accomplish.

This initiative is called the Canada-India Track 1.5 Dialogue on Innovation, Growth and Prosperity. Track 2 is a purely non-official exchange between say, NGOs or civil society or academics in two countries. Track 1 is the official process, and so Track 1.5 is a joint effort where the academic side, the civil society and governments come together and plan and discuss issues before they move on to the Track 1 stage.

The Track 1.5 gains importance because it involves two think-tanks — with CIGI and Gateway House taking the lead — where experts can provide their view and allow an open, frank and free discussion.

I think Canada and India have a long-standing deep relationship that goes back decades: deep rooted in people-to-people ties, a very strong and active diaspora community — 1.4 million Canadians of Indian origin contribute to a very thriving cultural, business, commercial link between the two countries.

So with the 1.5 Track Dialogue between Canada and India, what I’ve noticed is that there’s more people being involved in this conversation, so I think the opportunities really will allow both countries to innovate better, to be more prosperous and to grow.

One of the challenges that I feel that is the most important challenge of our time is climate change. And I know India is doing a lot research in climate change, so is Canada, so there’s a lot of opportunity to combine that research, and share that research, to make sure that we both deal with this issue individually, but also collectively as a world.

The world of today is a world in which innovation is the driving force. It is really the one intangible thing which drives countries forward. So I think if India and Canada cooperate together then Canada can help our start-ups scale up, and India can provide vital intellectual inputs for the Canadian ecosystem — innovation ecosystem — here in this country. And I think the partnership between the two countries can really be a win-win partnership, not only for the two countries, but really for giving new products and new technologies to the entire world.

In tech and innovation, India has a great advantage in that it has large, vast populations — mostly young people — who have taken to technology in a way that no other vast, massive population have, except for maybe China. Different regions, different languages, different method of thinking, different cultures, different eating habits — this is great for Canada to learn and for India to exchange with Canada and create these robust products.

If there’s one lesson we learned in the NAFTA to USMCA saga, it is that we cannot put all our eggs in the US basket. Economic gravity pulls us south, while we should be looking east and west. In that spirit, enhancing trade and financial relations with India makes a lot of sense for Canada. In addition to the bilateral track, it is important to keep in mind that these are two globally minded countries that have a common interest in strengthening the institutions that we have that make the world a better place.

In today’s world where narrow, domestic walls are being erected, fences are being constructed, the other is being kept out, Canada, with its constructive and compassionate voice in the world, and India, as the world’s largest democracy and also a country which manages a very complex diversity, can become the two leading voices seeking a freer world, seeking a happier world and a world in which all countries and all communities can cooperate together. 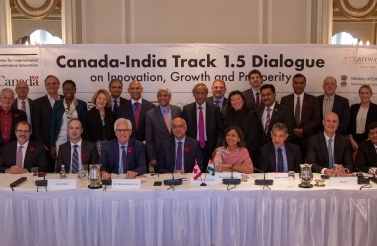 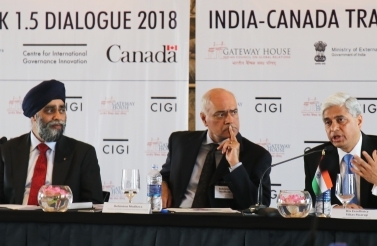